"The solution isn't to make the service inaccessible." 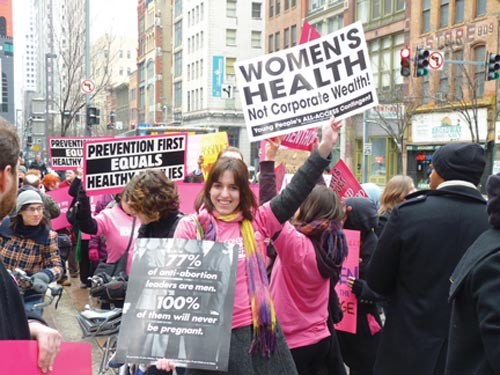 Protesters rally in support of Planned Parenthood in February.

Of the dozen or so abortion-related bills pending in the state, Senate Bill 732 is the most likely to cause some service-providers to shut their doors. Unfortunately for family-planning advocates, it's also among the bills most likely to pass.

Proposed by Sen. Patricia Vance (R-Cumberland), the bill would subject providers to the same fire, personnel and equipment standards as ambulatory surgical facilities. Those changes, advocates say, will force providers to close.

"For a woman to go into an operating room, that's $3,000 to $5,000. Who is going to pay for all that?" says Kim Evert, CEO of Planned Parenthood of Western Pennsylvania.

Half of the women PPWP serves are on public assistance. The procedure is paid for mostly out of pocket or through private insurance; government-funded Medical Assistance only covers abortions in the case of rape and incest.

State Sen. Jane Orie (R-McCandless), chair of the Senate's pro-life caucus, argues that the bill will put freestanding clinics on the same page as other medical centers.

"Why should it be treated any differently?" she says.

But family-planning advocates aren't the only ones opposed. Medical officials, like The American Congress of Obstetricians and Gynecologists and the University of Pittsburgh Medical Center, have also protested the measures.

Further, he wrote, ASF regulations "would be so burdensome and expensive" that most of the state's 20 facilities would have to close. Frietsche worries that will force women out of state or to unscrupulous providers, which is the very thing lawmakers claim they are trying to prevent.

The bill, and a similar measure in the House from Rep. Matt Baker (R-Tioga), were proposed after authorities shut down a Philadelphia abortion clinic operated by Dr. Kermit Gosnell. Gosnell was accused of performing illegal, late-term abortions; killing seven live infants; and operating in generally deplorable conditions.

"Some say this is the pro-life people trying to [burden] Planned Parenthood with an agenda," Orie says. "This is not instigated by anybody other than Gosnell and by the deplorable violations of health care in various centers across Pennsylvania. … It would be repugnant not to act on this."

But Evert, of Planned Parenthood, says the Vance bill is the wrong response. She says parts of that bill are just an effort to shut the industry down. "Gosnell didn't follow any of the current regulations," Evert says. "You do have people like that, but the solution isn't to make this service inaccessible."

"You'd think no one would want to be inspected, but they really do," says Frietsche, at the Women's Law Center. "They don't want there to be a rogue provider out there ever again."