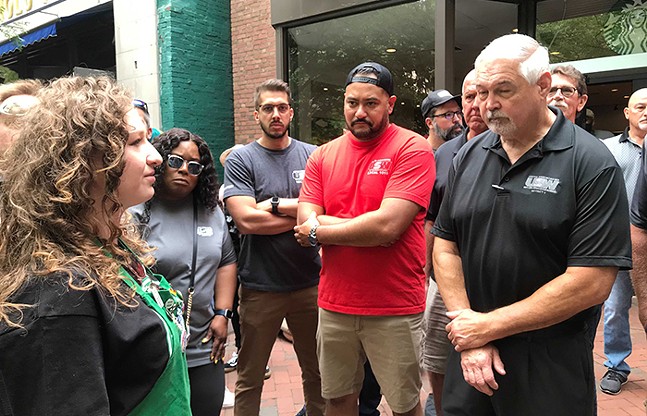 Two employees at Starbucks' Market Square location who have been active in their branch’s newly formed union were terminated yesterday for tardiness. But those workers, former supervisors Tori Tambellini and Kim Manfre, claim they were fired  in retaliation for their union organizing in violation of the National Labor Relations Act.

This afternoon, dozens of members of the United Steel Workers joined a group of Starbucks employees protesting outside of the Market District store demanding the reinstatement of the fired workers, as well as higher wages and more support for all store employees, whom Starbucks refers to as “partners.”

“They terminated Tori for being late by nine minutes,” Haley Palmore, who is a shift supervisor at another unionized Starbucks store in Oakland, tells Pittsburgh City Paper.

“There's so many other partners and partners that are not union supporters, if you look through their time cards, they've been late that many times or more, and they haven't even gotten a write-up," Palmore says. "So what are we doing here? I honestly think they wanted to fire them for unionizing, and they were just grasping at straws.”

Tambellini tells City Paper that yesterday, her managers asked her to sit down for a talk. She says she requested that a union representative sit in on the meeting, in accordance with what labor organizers call “Weingarten rights,” which protect workers’ right to have a union rep sit in on “investigatory meetings” with management. She says they denied her request, which she told them was illegal. Then, she says, they handed her a notice of separation, which cited an instance of tardiness from “a couple months ago.”

“As soon as I get in there, my store manager basically is telling me a bunch of stuff about ‘I don't want to do this, this is hard, stuff like that.’ And then she handed me a packet, and then she's talking about my lateness,” Manfre says.

“The biggest thing that we keep bringing up is the fact that there are so many people at our store that either no-call no-showed or came in 15 minutes late or more with no emergent reason, but haven't been reprimanded,” she says. Manfre has worked at Starbucks for almost four years, she says, most of that time as a supervisor.

Tambellini says the store’s union, which employees successfully voted to form last month, is in the process of electing a bargaining committee to negotiate their first contract.

In addition to reinstatement of the fired workers, organizers are demanding increased safety procedures for partners, higher pay, and better training. Partners at the Market Square store say they are frequently tasked with handling tense or uncomfortable situations with store visitors, and they don’t have enough support or training.

Tambellini says the Market Square store is “high-incident,” meaning that they file two to three incident reports a day, mostly about “misuse of our restrooms, people that camp out in our store from open to close, people who are struggling with substance use, houselessness, and other issues similar to those that make it so that our work environment is a little stressful at times, and we have to deal with a lot of things that we aren't really equipped to deal with at all.”

Manfre says Starbucks has offered partners information on “de-escalation” techniques, “but at the end of the day, we’re not social workers. We are expected to de-escalate situations that we are not capable of handling.”

“I had to Narcan someone outside of the store not too long ago,” Tambellini says. “We assumed they were just drunk, because they were in our cafe acting weird for a couple hours, and then we realized they weren’t breathing.”

Tambellini says she had Narcan, a medication that can reverse an opioid overdose, on hand because she regularly carries it, not because Starbucks provides it.

A Starbucks spokesperson tells City Paper that Tambellini and Manfre were fired for "violations of time and attendance policies. Time and attendance violations significantly impact our ability to properly run our stores and creates undue stress for the other partners on a shift. A partner's interest in a union does not exempt them from the standards we have always held. We will continue to consistently enforce our policies."