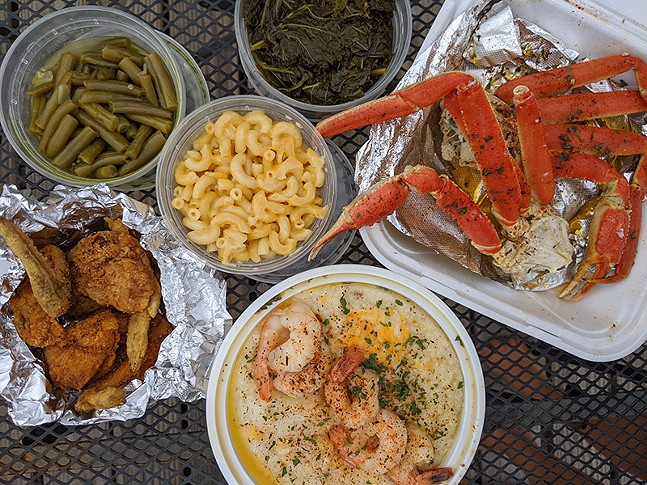 CP photo: Maggie Weaver
Crab, shrimp and grits, wings, mac ’n’ cheese, greens, and green beans from Soul & Sea
Though many parts of the food industry have changed in the last three months, one thing has remained the same: the fried lobster tail is still a must-have when dining at Soul & Sea.

Brittany Houser, co-owner of the three-year-old soul and seafood restaurant, introduced me to the dish the first time I visited their new eatery in the South Side. It was the breading that impressed me: a light, peppery mix that miraculously doesn’t overwhelm the delicate lobster meat.

Houser and her husband (who own the restaurants together) opened the first location of Soul & Sea in 2017, inside a Penn Hills strip mall. In 2019, the pair brought their dishes — said to be as “good as grandma’s” — to East Carson St.

The menu is split between soul food and seafood. Soul is a mix of classic dishes like pork chops, wings, and a variety of sides. Sea hits with dishes expected from a seaside restaurant: crab legs, lobster tail, and shrimp. The two come together on salads, loaded fries (stacked high with crab, shrimp, fries, peppers, onions, and sauce), and lobster mac 'n’ cheese.

Houser’s fried wings have been a consistent favorite for me, breaded with a mix similar to the lobster tail. It hits the same, with a peppery jolt at the beginning of each bite, and doesn’t hold grease as is typical of fried foods, which keeps the wings from feeling too heavy.

Crab legs, a crowd favorite, carry glowing reviews by fans for good reason: The legs are expertly cooked, well-spiced, and very tasty. Shrimp and grits are hearty; the lid of a takeout container can barely shut in the mountain of grain topped by a row of pink shrimp. Cheese is a necessary add-on here to provide another kick of flavor through the mild grits.

For sides, there’s a cheesy mac, deliciously salty green beans, pasta salad, and more. Houser’s greens have remained a prized component of every meal I’ve eaten at Soul & Sea. She prepares delicate and tender kale greens, finishing them with a light kick of spice.
click to enlarge 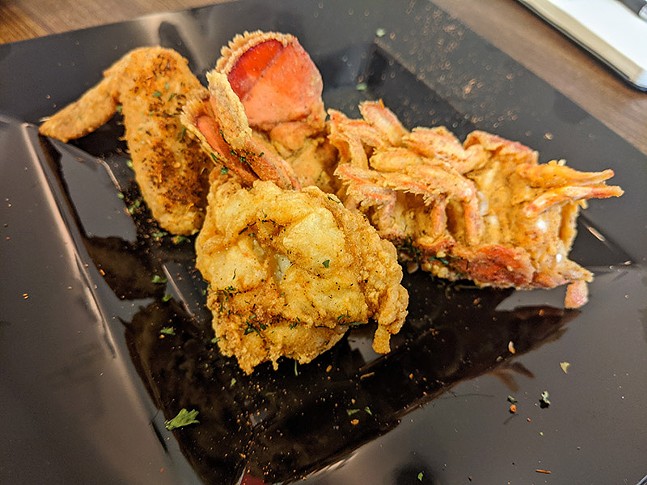 What really makes the menu stand out are Houser’s specialties, like the lobster tail. The two house pastas — The Don and The Timmy, both dedicated to friends who helped the restaurant get on its feet — are bathed in delicious and surprisingly light, cream-based sauces. A current dessert offering, scooter crunch cake, stacks layers of fluffy, strawberry cake and cheesecake and makes for a blissful end to any meal. Daily specials, anything from stuffed salmon to make-your-own-stir-fry, are not to be missed.

As marches for Black Lives Matter and protests against police brutality continue in Pittsburgh and across the nation, it can seem difficult to find a way to support the community. Eating from a Black-owned and operated local restaurant like Soul & Sea, now and through the future, is one of the many ways to back Black businesses around you.

If you’re looking for a full list of Black-owned restaurants in Pittsburgh, there are a variety of resources to use. Alexis Johnson, a reporter for the Pittsburgh Post-Gazette, compiled a full list earlier this year that is consistently updated to reflect COVID-19 restrictions. On social media, look to accounts like Black Owned PGH (Instagram.com/blackowned.pgh) for guidance on who to follow, where to shop, and what to eat.
Soul & Sea. 10718 Frankstown Road, Penn Hills; 1728 E. Carson St., South Side