"Brian is the only singer I've worked with who is actually a musician." 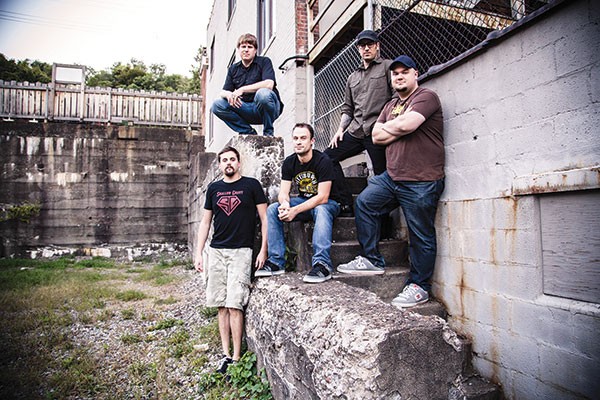 Into the ... well, you know: Supervoid

If the sight of dozens of zombies meandering toward Arsenal Park a couple of weekends ago wasn't enough to draw the attention of neighbors, the sound of Supervoid booming across Lawrenceville was.

The event was Zombie Fest, and Supervoid was first in a day-long musical lineup; just a few early arrivers drew close to the band, bobbing their fake-blood-covered faces to the beat. But Supervoid sounded huge and heavy, and frontman Brian Urban's vocals could have filled a packed arena. "It's the first time we've played outside," bassist John Braymer says. Perhaps they should make a habit of it.

The original vision for Supervoid — which then, in 2012, included Braymer, guitarists Joe Madia and Dave Warren, and drummer Greg Kemper — was something stoner-ish and fuzzy, along the lines of Fu Manchu or Kyuss. The problem was: They couldn't find a singer.

After trying out three or four people, Braymer explains, "We started to think, ‘Maybe vocals just don't sound good in this practice space.'" Then Urban showed up. Formerly the singer for Dungeons and Dragons-themed death-metal band Dethlehem (which Warren was also a member of), Urban adds a twist to the Supervoid's proggy anthems, slick desert rockers and sludgy blues jams. "We thought about doing clean vocals," Braymer says, "but Brian had just spent five years in a death-metal band."

That death growl, Urban adds with a smile, "is hard to get rid of."

However, Urban's vocal style could hardly be called limited; he shifts easily from throat-shredding to clean and airy and a Chris Cornell-style grungy soulfulness. While such a range is not unheard of, most bands with such vocal variation — like Mastodon, one of Supervoid's most obvious influences — split vocal duty among members. "Brian is the only singer I've worked with who is actually a musician," Braymer says. "He helps with songwriting; he'll sing out a riff suggestion. Everyone else [I've worked with] just got drunk."

When it came to recording Supervoid's first full-length, Filaments — which the band will release Saturday — finding like-minded producers was a challenge.

"I'm not saying we're super-original," Braymer says, "but no one in Pittsburgh really sounds like us. We looked at different studios, but we didn't want to be someone's recording guinea pig. We wanted someone who would know where we were coming from."

They ended up with three local musicians: Chris Ruane, of Fist Fight in the Parking Lot, recorded drums; John Dziuban, of Sistered, did the mixing and the rest of the recording; and Hero Destroyed's Zach Moore did the mastering. The clean, radio-friendly production — which brings to mind recent records by bands like Baroness and Kylesa — manages to (mostly) capture Supervoid's volume without becoming muddied.

Drawing songwriting inspiration from B-movies, video games, current events and especially, Urban says, the Wachowskis' film adaptation of Cloud Atlas, the record is full of epics with titles like "Rodeo Queens of Allegheny County" and "Braymerian: War Elephant." It feels like a concept album, but what that concept is, exactly, isn't totally clear, perhaps even to the band.

"You couldn't make a movie out of it," Braymer admits. But, he says, "We're all nerds. We're just trying to tell an interesting story."