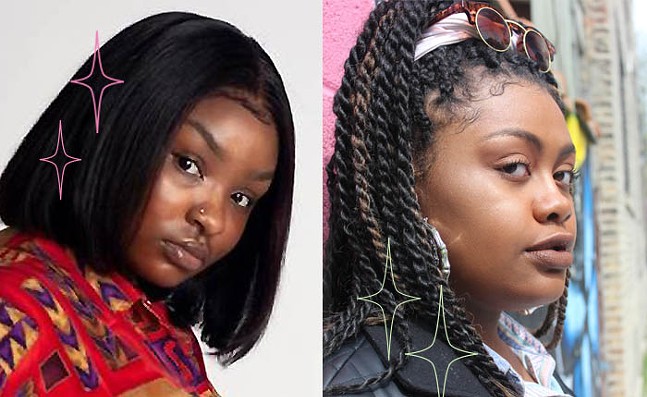 Photos: Courtesy of Kelly Strayhorn Theater
Sunstar headliners Najj Andrea and Nairobi
The upcoming Sunstar Festival at Kelly Strayhorn Theater promises to be a lot of things. With a focus on Womxn & Music, the event will showcase a number of new and emerging Black femme musicians, DJs, and other artists, including headliners Nairobi and Najj Andrea, two local talents who will debut new works they created during KST’s Black Femme Musical Artist Incubator.

To Nairobi, though, one description of the lineup, which includes King JMP, The Childlike Empress, Savannah Shantell, DJ Femi, Juiced Up Joey, Dejah Monea, ICY PISCES fka DJ Aesthetics, and others, represents something more.

“I also saw some people on Facebook say, ‘This is the most unambiguous group of Black women I've ever seen,’” says Nairobi, the stage name for Naomi Ruth Allen. “I was like, ‘Ooh, yay. That's great.’”

She explains that, many times, when certain grants and other opportunities are categorized and promoted for Black women, it creates problems within the community, as the women chosen are often “racially ambiguous” or “exotic, in a way, but are Black.” This distinction adds to hurdles that both Nairobi and Najj see many Black women having to deal with in Pittsburgh and beyond.

“There seems to be this misconception, and I think this applies to women in general, that when we speak our minds, and when we say we're clear on what we want, when we take that leadership role, then it's, like, you're a diva, you're difficult to work with, it's all these negative stereotypes that are suddenly being enforced,” says Nairobi. “And that's been really difficult to navigate through in Pittsburgh because I've just constantly come across that so many different times, just from me saying, ‘This is what I want, or this is the artist that I am, or this is the music that I do, this is what I will do.’ Just the simple act of advocating for yourself becomes you being difficult.” 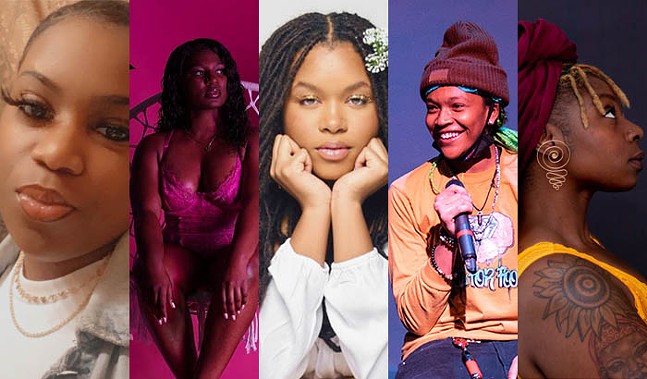 Photos: Courtesy of Kelly Strayhorn Theater
Sunstar performers Savannah Shantell, A’leighsha J, Dejah Monea, Juiced Up Joey, and Diarra Imani
Though the Sunstar Festival has taken place since 2009, this marks the first year for the Black Femme Musical Artist Incubator. The program, along with the show, which takes place over two nights from Fri., March 18-Sat., March 19, could help remedy what Nairobi and Najj see as disparities in the industry when it comes to representation.

Nairobi believes part of the reason she has trouble finding support is due to the kind of topics she covers in her music, including sexual assault and rape, something that she herself has experienced.

“Saying that you can overcome that, and you can be resilient and come from that and heal, and you don't have to stay in that place that you were once in,” she says, “that's just really important to me to do that. But it has been hard because, you know, some people look at it as too serious, I think it can be looked at as a form of activism as well. And I'm fine with that. But I'm also just like, ‘We need to have these conversations more.’”

She also uses her art to focus on mental health, which she says is a taboo subject in the Black community, where seeking treatment is seen as a sign of weakness.

“You can't be vulnerable, you have to be strong all the time,” says Nairobi. “And it's so dehumanizing to believe these stigmas, to continue them, and it's been passed down from generation to generation.”

Najj, aka Najjah Andrea M’Lei Cobb, says she has been performing professionally since she was 15 and in 10th grade, and that trying to make it in the music scene as a young Black woman has been “discouraging.”

“Balancing school life, music life, and just being a young female in this crazy world has been hard. It is also hard to be accepted and respected in this industry because I feel like we have to work and prove ourselves more and that causes us to come off as aggressive and crazy when we’re really just passionate about our art,” says Najj.

This is where programs like the Black Femme Musical Artist Incubator come in. The newly launched, six-week program not only sought to cultivate “mainstage talent” for the Sunstar Festival, but also to provide tools and training to help the chosen artists become more successful in their respective careers. Along with mentorship from established artists, Nairobi and Najj attended sessions covering writing an artist statement and biography, fundraising, and promoting themselves on social media, as well as “considering the theatricality of stage performance with regard to lighting, effects, direction, and choreography,” according to a press release.

“I was able to learn the skills and mindset it takes to really put a show together,” says Najj. “Creating your dream set, making sure everybody is available, scheduling enough rehearsals, and balancing your daily responsibilities. It can all be a lot, and sometimes you get so caught up in it that you forget to actually enjoy the moment and the process.”

From there, Nairobi and Najj were allowed to choose two artists each to open for them, making the event accessible to even more voices.

In terms of what Sunstar audiences can expect, Nairobi says her performance will combine elements of her theater background (she graduated from Point Park University with a BFA in acting) and “a lot of soul, a lot of passion, a lot of R&B music.”

“I would say the audience can expect to hear a lot of different sounds and music, to go through this journey of storytelling in which we'll just talk about different aspects in life, and how these aspects have attributed to hardships as a Black woman in Pittsburgh, and just in life in general,” says Nairobi. “And then also a good time. I'm definitely planning on performing some music that we all know and love, and just having fun.” 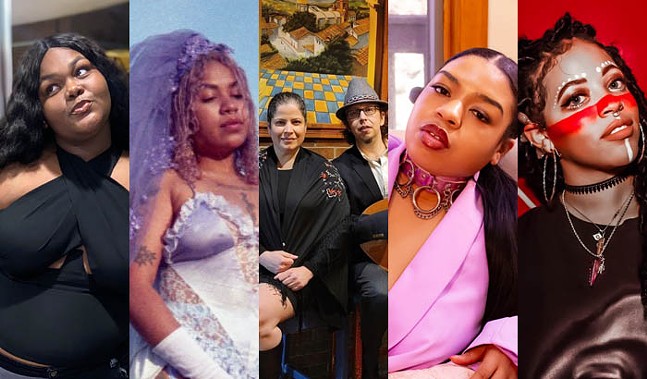 Photos: Courtesy of Kelly Strayhorn Theater
Sunstar performers King JMP, The Childlike Empress, Geña y Peña, ICY PISCES, and DJ Femi
Najj describes her set, titled “A Love Stimulation,” as “basically taking you through the emotions of relationships,” the good and the bad.

“Each song has a color that represents the emotion and feeling of the song,” says Najj. “So I hope you all are ready for the emotional roller coaster ride.”

Nairobi sees the latest Sunstar Festival as an example of ways that KST, and other institutions in Pittsburgh, can open up to artists who are often overlooked.

“It’s great to know that the representation is there and the support is there,” says Nairobi. “And yeah, I think Kelly Strayhorn is also doing a really good job because a lot of the opening acts are newer artists. And for a few of them, this is their first time ever at really performing. So that's also really awesome, that they're just willing to give the people that haven't had as many opportunities and also just completely introduced new acts to the audience.”  Sunstar Festival. 6-10 p.m. Fri., March 18-Sat., March 19. Kelly Strayhorn Theater. 5941 Penn Ave., East Liberty. $20-35 for a single ticket or $35-50 for a two day festival pass. kelly-strayhorn.org/events/sunstar2022