Two Tales of Horror. Adaptations of Poe’s “The Tell-Tale Heart” and “The Fall of the House of Usher,” through Fri., May 20 (PICT Classic Theatre).

Jeeves Intervenes. Margaret Raether’s adaptation of the P.G. Wodehouse stories, about a faithful valet rescuing his playboy boss from an unwanted wedding, through May 21 (Little Lake Theatre Co.).

The Musical of Musicals. The cult-favorite spoof of famous Broadway composers, through May 21 (Off the Wall).

The Best Little Whorehouse in Texas. The 1978 musical comedy, through May 22 (McKeesport Little Theater).

The Giver. It’s the world premiere of this adaptation of Lois Lowery’s Newberry-winning young-adult novel about a boy coming of age in a dystopian society, through May 22 (Prime Stage Theatre Co.).

The Lion. Benjamin Scheuer wrote and stars in this one-man musical memoir, through June 5 (City Theatre). 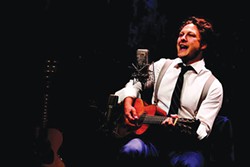 Photo courtesy of Matthew Murphy
Benjamin Scheuer in The Lion, at City Theatre through June 5

The 13th of Paris. Romantic comedy about a guy who goes to Paris with his late grandparents’ love letters, Thu., May 19-June 4 (South Park Theatre).

The Foreigner. Larry Shue’s farce about a pathologically shy Brit in rural Georgia posing as someone who speaks no English, May 20-June 4 (Apple Hill Playhouse).

From My Hometown. Classic R&B tunes provide the score for this play about three newcomers to New York ambitious to sing at the Apollo, May 27-June 5 (New Horizon Theater).

Spitfire Grill. James Valcq and Fred Alley’s popular 2001 musical about a young woman just out of prison trying to start her life over, May 27-June 5 (Front Porch Theatricals).

Matilda. Award-winning Broadway musical based on Roald Dahl’s popular children’s book about a young girl and her imagination, May 31-June 12 (CLO Cabaret).

The Consorts. A condemned British archbishop and his otherworldly visitors are the main characters in Timohty Ruppert’s dark comedy set in 16th-century England, June 2-12 (The Summer Company).

Venus in Fur. David Ives (All in the Timing) had a hit with this play about a theatrical audition that takes an unexpected turn, June 2-26 (Public).

Sin, Sex & the CIA. Michael and Susan Parker’s farce about the CIA, foreign dignitaries, a fundamentalist preacher and a sexy neighbor, all in the Virginia mountains, June 16-25 (Apple Hill).

Light Up the Sky. Moss Hart’s 1949 backstage farce about the premiere of an overly earnest play, June 16-July 2 (Little Lake).

Chicago. John O’Hurley (Dancing With the Stars) stars in Kander & Ebb’s perennial favorite about crime and corruption in the big city, June 17-26 (CLO).

Church Basement Ladies. Musical comedy about the volunteers in a church kitchen in rural Minnesota in 1965, June 30-July 16 (South Park).

Kiss Me, Kate. Cole Porter’s backstage musical riffing on The Taming of the Shrew, at Falk Auditorium, July 8-23 (Summerfest).

Anything Goes. Classic Cole Porter musical featuring tunes like the title number, “I Get a Kick Out of You” and “You’re the Top,” July 8-24 (Theatre Factory).

Shrek The Musical. Adaptation of the hit film about an ogre and a donkey on a mission to rescue a princess, July 15-24 (CLO).

The Tin Woman. Drama about a woman who tracks down the family of the young man who supplied her new heart, July 21-Aug. 6 (South Park).

The Silent Woman. Strauss’ comic opera about a man who thinks he’s marrying a shy young woman, July 22 and 24 (SummerFest).

The Hound of the Baskervilles. Local favorite David Whalen plays Sherlock Holmes in this adaptation of the famous story, July 23-Aug. 7 (Kinetic).

The Spitfire Grill. James Valcq and Fred Alley’s popular 2001 musical about a young woman just out of prison trying to start her life over, July 28-Aug. 6 (Apple Hill).

Peribañez. Tanya Ronder’s contemporary adaptation of the 1614 Lope de Vega tragicomedy about an aristocrat who meddles in a peasant wedding, Aug. 5-28 (Quantum Theatre).

Weekend Comedy. Middle-aged marrieds and a carefree young couple find themselves in the same remote rental cabin for the weekend, Aug. 11-27 (South Park).

This Is Why We Can’t Have Nice Things. Heidi Nagle’s one-woman show about growing up in Amish country, Aug. 18-20 (Off The Wall).

A History of the American Film. Hollywood archetypes — the good girl, the tough guy, the wisecracking friend — get a going-over in Christopher Durang’s madcap 1978 comedy, Aug. 18-28 (Summer Company).