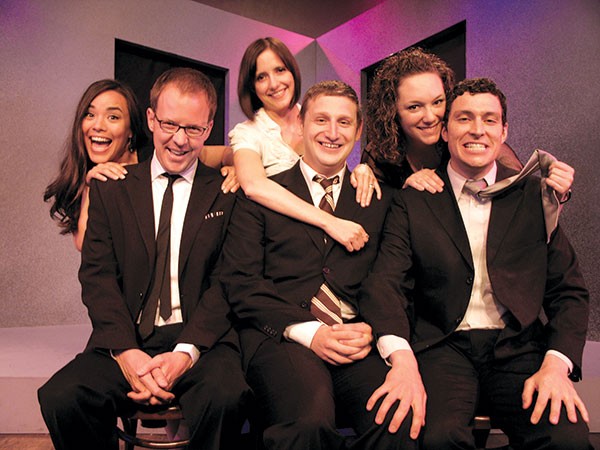 The Second City at Pittsburgh Public Theater, Aug. 23 and 24

Abigail/1702. Roberto Aguirre-Sacasa's drama follows the girl who cried "Witch!" in The Crucible into adulthood, through May 26 (City Theatre).

Clybourne Park. Bruce Norris' scathing, Pulitzer- and Tony-winning comedy about race as expressed through home-selling (and -buying) in one Chicago house, in 1959 and 2009, through May 19 (Pittsburgh Public Theater).

Dani Girl. A young girl copes with a life-threatening disease through the power of imagination in this new musical by Michael Kooman and Christopher Dimond, through May 19 (Stage 62).

Five Women Wearing the Same Dress. Alan Ball, who went on to American Beauty and Six Feet Under, wrote this 1993 comedy set amongst bridesmaids backstage at a wedding, through May 19 (McKeesport Little Theatre).

Little Shop of Horrors. The classic doo-wop musical about a man-eating houseplant, by Howard Ashman and Alan Menken, through May 19 (Little Lake Theatre).

Next to Normal. Brian Yorkey and Tom Kitt's hit 2009 Broadway musical about a troubled American family, which won a Pulitzer Prize and multiple Tonys, through May 19 (Stage 62).

Pittsburgh International Children's Festival. Performers from around the world are featured at this annual festival based in Oakland and presented by the Pittsburgh Cultural Trust, through May 19. www.trustarts.org

Tarzan. Adapted from the animated Disney movie, with songs by Phil Collins, through May 19 (Pittsburgh Musical Theater).

Without Ruth. Daughters must make end-of-life decisions about their mother in this brand-new play by Off the Wall's Virginia Wall Gruenert, through May 18 (Off the Wall Productions).

Moonlight & Valentino. Three women visit a fourth whose husband has unexpectedly died in this comedy by Ellen Simon, May 16-June 1 (South Park Theatre).

In the Raw. The reading series for new plays concludes with The Gospel Singer, by Pittsburgh-based playwright C.S. Wyatt, a drama about a singer torn between two cultures, May 19 and 20 (Bricolage Productions).

Side By Side By Sondheim. A popular revue of songs by Stephen Sondheim, drawn from Company, Follies, West Side Story and more, May 23-Aug. 18 (CLO Cabaret).

The Kreutzer Sonata. Pittsburgh premiere of Nancy Harris' adaptation of the Tolstoy novella about a man whose belief that his wife had an affair might have been mistaken, May 30-June 22 (Pittsburgh Irish & Classical Theatre).

Man of La Mancha. The frequently revived Broadway hit musical, featuring "The Impossible Dream," imagines an imprisoned Miguel de Cervantes acting out his Quixote, May 30-June 8 (The Company of Pittsburgh).

Other Desert Cities. Palm Springs shortly after the 2003 invasion of Iraq is the setting for Jon Robin Baitz's acclaimed new comic drama about a well-connected but dysfunctional family, June 6-30 (Pittsburgh Public).

Same Time Next Year. Bernard Slade's 1975 comedy about two lovers who have an annual assignation for a quarter-century, June 6-22 (South Park).

State of the Union. Howard Lindsay and Russel Crouse's 1945 play about a presidential candidate having an extramarital affair, June 6-15 (The Summer Company).

Why Do Fools Fall in Love? Roger Bean's musical revue featuring '60s pop from "I Will Follow Him" to the title tune, June 6-22 (Apple Hill Playhouse).

Sylvia. A.R. Gurney's comedy about a married man having a mid-life crisis and the stray dog who advises him, June 13-29 (Little Lake).

The Tempest. Not exactly Shakespeare's version; rather, William Davenant and John Dryden's 1667 version based on Willy's take, June 13-29 (Unseam'd Shakespeare).

Phantom. Not the Andrew Lloyd Weber thing, but rather Maury Yeston and Arthur Kopit's own 1991 musical adaptation of the creepy romance, June 21-30 (Pittsburgh CLO).

You Haven't Changed A Bit and Other Lies. This 2001 "musical about growing up at 60" takes a comic look at three longtime married couples, June 27-July 13 (South Park).

Motherhood Out Loud. David Cale, Beth Henley and Theresa Rebeck are among the 14 writers who collaborated on this recent anthology-style play about, well, motherhood, July 3-20 (Little Lake).

Mnemonic. British theater company Complicite devised this 1999 play, with multimedia, about how "place and memory collide while stories that are older than the millennium connect us to each other and those who came before," July 5-28 (Quantum Theatre).

The Tales of Hoffman Retold. A new version of this opera about a man's complicated love life, part of Opera Theater of Pittsburgh's SummerFest, July 6, 13 and 21 (Opera Theater).

A Little Night Music. Sondheim's modern-classic musical (featuring "Send in the Clowns") about romance and infidelity in the countryside, July 7, 12, and 20 (Opera Theater).

The Love List. Norm Foster's contemporary comedy about a middle-aged guy who seems to get just the woman he's wishing for, July 18-Aug. 3 (South Park).

A Slight Case of Murder. Damon Runyon and Howard Lindsay's 1930s comedy details the travails of an ex-bootlegger and his family adjusting to respectable life, July 18-27 (Summer Company).

Oedipus Rex. Sophocles' classic about a king trying to save his ravaged country, July 19-27 (Throughline).

Italian-American Reconciliation. A guy tries to win back his ex-wife in this comedy from John Patrick Shanley (Moonstruck), July 25-Aug. 10 (Little Lake).

The Buddy Holly Story. The short life and many hits of the groundbreaking rocker are fodder for Alan Janes' musical, July 30-Aug. 4 (Pittsburgh CLO).

Southern Hospitality. Comedy about the four Futrelle sisters trying to save their small Texas town by luring a salsa manufacturer, Aug. 1-11 (Apple Hill).

Don Juan Comes Back from the War. A new translation of Odon Von Horvath's 1936 play imagining the legendary lothario as a repentant ex-soldier in the wake of World War I, Aug. 8-31 (PICT).

Tuesdays With Morrie. A journalist's relationship with his terminally ill former college professor is the subject of this two-character drama, adapted from Mitch Albom's book by Albom and Jeffrey Hatcher, Aug. 8-24 (South Park).

On Golden Pond. Ernest Thompson's chestnut about an elderly couple, their summer home and their step-grandson, Aug. 22-Sept. 1 (Apple Hill).

Happily Ever Laughter. Chicago's famed Second City brings its improv and sketch comedy to the Pittsburgh Public Theater for three shows only, Aug. 23 and 24 (Public).

In the Heights. It's the first local production of Lin-Manuel Miranda's hit Broadway musical about a New York neighborhood, sung and danced to Latino music and hip hop, Aug. 23-Sept. 1 (Carrnivale Theatrics).

The Art of Murder. A painter plots to kill his art dealer in Joe DiPietro's comedy, Aug. 29-Sept. 14 (South Park).

Is He Dead? New adaptation of a recently unearthed Mark Twain farce about a struggling young Parisian painter who fakes his own death, then poses as his own twin sister, Sept. 5-21 (Little Lake).

Honk Jr. A musical based on the Hans Christian Andersen classic about an ugly duckling, through May 26 (Playhouse Jr.)

Huck Finn. Mark Twain's story of the runaway kid and his companion, Jim, on a raft on the Mississippi, adapted by Eric Coble, through May 26 (Playhouse Jr.).

Fe Fi Fo Fum. Those magic beans will get you every time, even in this musical adaptation by Vera Morris and Bill Francoeur, July 18-Aug. 26 (Johnny Appleseed).

Charlie and the Chocolate Factory. Adaptation of the famous Roald Dahl story about kids who win a tour of a mysterious candy factory, July 17-Aug. 3 (Looking Glass).

The Monster Under the Bed. A kid gets the day off from school when his mom accidentally takes the monster under the bed to school in Kevin Dyer's play, Aug. 7-24 (Looking Glass). 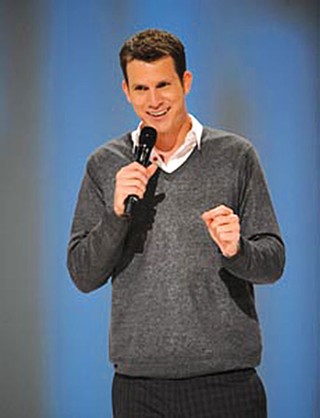 Daniel Tosh at the Benedum, June 12