“It’s definitely going to send a positive message to the community.” 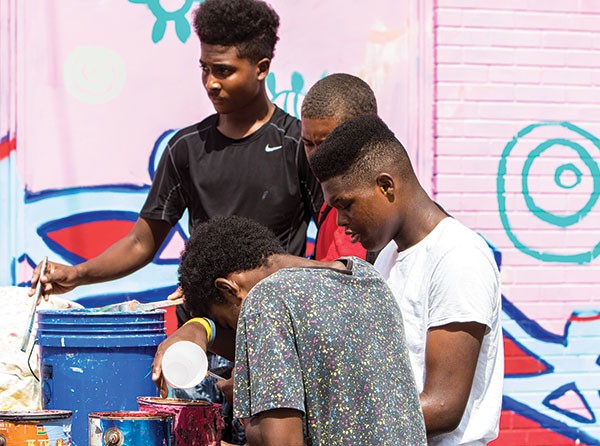 Ten years ago, as a teenager with a child of his own, Paris Wellons thought getting paid to participate in a summer program painting murals around the city was a pretty good deal.

“I’ve always wanted to be an artist,” says Wellons, 26. “I started painting around my mom’s house, under the table. I probably had a whole mural done under there.”

The Moving the Lives of Kids Community Mural Project is a Pittsburgh-based nonprofit that has worked with local kids to create more than 250 public-art pieces throughout Allegheny County. Celebrating its 15th anniversary this year, the program has been an inspiration to Wellons, who at 16 lost his brother to gun violence.

“I had a hard life growing up. I’ve lost family and a lot of friends,” says Wellons. “But [the mural project] has had a big impact on me.”

Now Wellons is a supervisor in the same program that set him on the path to being a professional artist. This summer, he’s working with kids to help complete 10 murals in Pittsburgh neighborhoods like North Side and Homewood. This year’s theme is “Stop Gun Violence.”

“It’s definitely going to send a positive message to the community,” Wellons says. “There’s a lot of violence that takes place in these communities. I don’t really know that this is going to stop it, but if you’re not part of the solution, you’re part of the problem.”

North Side and Homewood are two of the neighborhoods hardest hit by gun violence. Since May 31, five shootings have been reported in Homewood. In the North Side, which is larger in size, a dozen shootings have occurred.

“Gun violence is definitely an issue that needs to be addressed,” says Rashad “Free” Jamal, another supervisor with the program. “A lot of the youth deal with this every day. Everyone has a story to tell about someone they lost.”

Kids work on a mural project in Homewood

The nearly finished mural on the side of the Community Empowerment Association’s Homewood building depicts African-American history and recent incidents of gun violence. Kids at the site say the colors selected to paint the mural were chosen because they depict vibrancy.

“I like the fact that it shows our history. You see the past and the present and everything that’s going on with the gun violence,” says Jasmine Thompson, 14. “I hope it sends a message that there are other things people can do with their time instead of going down the wrong path.”

Thompson says her close friend was related to slain Florida teen Trayvon Martin, who was shot in 2012 by George Zimmerman, a neighborhood-watch volunteer. Zimmerman was never convicted for the shooting. For Thompson, a portion of the Homewood mural depicting a hooded African American raising a closed fist to the sky evokes Martin’s death.

Approximately 20 kids were involved in painting the Homewood murals. Each child receives a $1,200 stipend for participating.

“We’ve worked really hard on this in the sun,” says 15-year-old Carma Luna, on yet another above-80-degree day. “I’m excited to see the outcome of it when it’s finished. It’s good for the kids to see the mural.”

Allegheny County kids aren’t the only ones benefitting from the program. Since it was founded in 2002, by artist Kyle Holbrook, the MLK Community Mural Project has expanded to more than a dozen cities internationally, reaching as far as the Bahamas and Portugal.

“It’s about bringing people together,” says Jamal. “The communities we do this in, there’s a lot of blight, so we’re trying to bring some positivity.”