British stand-up comedian and actor Eddie Izzard, who first came out as transgender over three decades ago, calls himself “a lesbian trapped in a man’s body.” Come for the political jokes; stay for the lipstick. 8 p.m. Byham Theatre, 101 Sixth St., Downtown. $64.25-78.75. trustarts.org

City Theatre stages burnbabyburn, a Pittsburgh tale by former Young Playwrights Festival winner, a.k. payne. Set in Homewood, the play is described as weaving a tale of two women “bound by legacy, history, and a search for their own voice.” 7 p.m. 1300 Bingham St., South Side. Free. RSVP required. citytheatre.culturaldistrict.org

Sometimes the world can feel so dark, you don’t know whether to laugh or throw your money at charity. You can do both at the Laughs for Libertycomedy show at Arcade Comedy. Proceeds benefit the ACLU of Pennsylvania. 8 p.m. 943 Liberty Ave., Downtown. $25. 16+. arcadecomedytheater.com

Get back to the roots of American cuisine with a talk from Chef Sean Sherman at the August Wilson African American Cultural Center. Sherman is from the Pine Ridge reservation and the founder of The Sioux Chef. He emphasizes using indigenous foods to redefine North American cuisine. 7 p.m. 980 Liberty Ave., Downtown. $38.75. aacc-awc.org

The Dust People, a new play from Catherine Trieschmann, explores the world of traditional farming clashing with renewable energy in a rural town. Everything gets more dramatic when a murder occurs. 7 p.m. Lester Hamburg Studio, 1300 Bingham St., South Side. Free (RSVP required). citytheatre.culturaldistrict.org

Like the one on 30 Rock with Jenna Maroney and Liz Lemon, but musical and not fictional, The Girlie Show is a series founded by, booked for, and featuring women musicians. At Hambone's, the lineup includes Liss Victory, Liz Berlin, Tai Chirovsky, and Amy Mmhmm. 8 p.m. 4207 Butler St., Lawrenceville. $10. hambonespgh.com

Now settled into his gig as host of The Daily Show, Trevor Noah has managed the impressive balancing act of keeping the show on track without relying too much on old tricks. Catch Noah in his original comfort zone, when he brings his standup tour Loud & Clear to Petersen Events Center. 8 p.m. 3719 Terrace St., Oakland. $46. peterseneventscenter.com 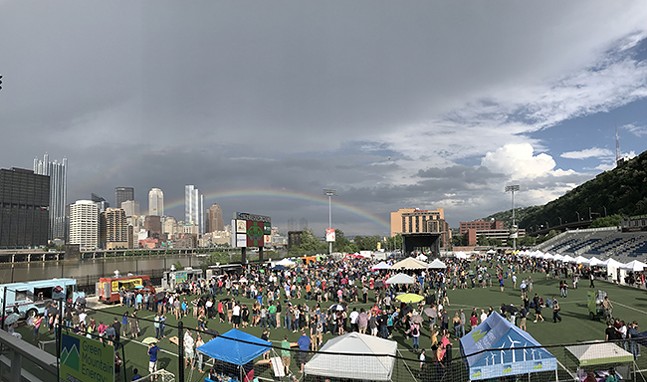 
Who’s got the best taco in town? No need to argue when you can find them all in one place at Pittsburgh Taco Festival. The event returns to Highmark Stadium for the third year with live music and more than 30 vendors. Two sessions: 12 p.m. and 4 p.m. 510 W. Station Square Drive, Station Square. $10. pghtacofest.com

If summer is something you like more in concept than up close and personal, check out the Wild & Scenic Film Festival at Pittsburgh Playhouse. The touring festival aims to inspire "environmental activism and a love for nature through film." 6 p.m. 350 Forbes Ave., Downtown. $25. wildandscenicfilmfestival.org

Enjoy an evening of classical and contemporary works from students at various levels when the Bodiography Center for Movement presents its Spring Concert at the Byham Theater. 7 p.m. 101 Sixth St., Downtown. $31.50. trustarts.org

Warning: this listing contains spoilers. Just kidding. Or are we? Congratulations. You complained so much that Game of Thrones decided to end itself. But you can still get the last laugh at The Roast of Jon Snow hosted by Burning Bridges Comedy Club. Get your neighbor to walk your dire wolf and head out for some pointed comedy. 8 p.m. 4207 Butler St., Lawrenceville. $15. burningbridgescomedyclub.com