One satisfaction of the summer concert season is its sense of familiarity: an enjoyment of musical acts deepened by the fact that they've appeared at the same venue, at the same time of year, forever. Only the changing T-shirt designs (and the size you buy) mark the passage of time ... OK, so it's a bittersweet satisfaction.

For many Pittsburghers, the season no doubt begins and ends at Post-Gazette Pavilion: Kick it off with the ceremonial pilgrimage to see the Dave Matthews Band on May 30-31, then return at summer's end, like a snake eating its tail, for Maroon 5 with Counting Crows on Aug. 21. And if that's all you need, that's totally OK -- but the following are options to expand your summer rituals.

Because this is Pittsburgh -- and because classic rock is, well, classic -- there's plenty of you-know-what. Early on, catch Hank Williams Jr. and some version of Lynyrd Skynyrd at Mellon Arena, on May 17. Then, there's Tom Petty and the Heartbreakers with Steve Winwood (June 10), Rush (July 2), and the Steve Miller Band with Joe Cocker (July 12) -- all at Post-Gazette Pavilion. On July 18, they who fear not the reaper can see Blue Öyster Cult at Hartwood Acres.

The Police are finally making it here, on July 28, with Elvis Costello and the Imposters at Post-Gazette Pavilion; The Black Crowes play the Byham on Aug. 5, and dad-rockers-in-the-making Foo Fighters hit the Petersen Events Center on July 26, with Supergrass.

Summer music and arts festivals are another pleasant recurrence, especially if you're fond of chicken-on-a-stick and whatnot. The evergreens include: the Pittsburgh Folk Festival (May 16-18), the Laurel Highlands Bluegrass Festival in Ligonier (June 20-21), the Pittsburgh Blues Festival at Hartwood Acres (July 25-27) and at summer's end, the Johnstown FolkFest (Aug. 29-31).

The Three Rivers Arts Festival, too, offers some repeats from previous years -- let's call them "audience favorites." On June 21, catch top-shelf bluegrass and Americana from The Avett Brothers, and on June 22, the devastating songs of Alejandro Escovedo. On June 15, in the festival's ongoing love-affair with 1970s New York punk icons, The New York Dolls take the stage, albeit likely wearing makeup for different reasons nowadays.

Local musicians are the stars of two festivals: Jambaloosa and Rootz. The Jambaloosa Music and Arts Festival, held June 27-29 amidst the caves and campgrounds of Wampum, Pa., features local jam bands including The Boogie Hustlers, Jazzam and the Poogie Bell Band. July 12's Rootz: The Green City Music Festival, in Mellon Park, features folkies Steve Forbert, the Lackawanna Longnecks, Lohio, Mon River Ramblers, Road to the Isles, and many others.

It's also a good summer to catch local groups spreading their wings a bit. WYEP's Third Thursday series features promising locals at its Community Broadcast Center, including singer-songwriters Paul Luc (May 15) and Nicole Reynolds (Aug. 21). Retro-rockers The Takeover UK display the first fruits of the band's record deal with Rykodisc, releasing the It's All Happening EP on May 21 at Lava Lounge; spacey instrumentalists Olympus Mons release a long-overdue album May 24 at the Rex. Hip-hop band Formula 412 headlines a night at the Three Rivers Arts Fest on June 16. 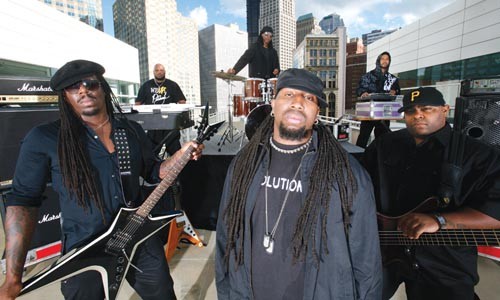 Local acts will also play the area's biggest amphitheatre on June 21, at the Post-Gazette Pavilion's Homegrown HooHa showcase. The Clarks, Donnie Iris and the Cruisers, and The Gathering Field are all safe bets, but it's a pleasant surprise that the show also features Gene the Werewolf, Anthony Rankin, Margot B. and Americana act Lohio. And of course it doesn't get any more local than a battle of the bands -- for that, stop by Mr. Small's on May 24 for the local finals of the nationwide Emergenza competition.

One thing that seems in uncharacteristically short supply this summer is country, though you can still catch Kenny Rogers (May 22) and George Jones (May 31) at the Pepsi-Cola Roadhouse; Kenny Chesney, LeeAnn Rimes and others at Heinz Field (June 14); and Tim McGraw and friends at the Post-Gazette Pavilion (July 6). There's no shortage of schmaltz, however: witness Johnny Mathis at Heinz Hall (July 11-12), and at Mellon Arena, American Idols Live (July 29) and Neil Diamond (Aug. 18).

The summer roars to a close with an onslaught of heavy-duty package tours hitting Post-Gazette Pavilion. There's the punky Vans Warped Tour (July 29) and the Rockstar Energy Drink Mayhem Festival, featuring Slipknot, Disturbed, Dragonforce, Mastodon and their gloomy ilk (Aug. 2). Hair metal shakes its locks Aug. 10 with Poison, Dokken, and Sebastian Bach; real metal bares its fangs Aug. 16 with Judas Priest, Heaven and Hell, Motörhead and Testament. Splitting the difference between all these is the last big concert of the summer, Mötley Crüe with Buckcherry, Papa Roach, Sixx:A.M. and Trapt, on Aug. 31.

Such a program will certainly end your summer concert rituals on an exhausted, cathartic note ... but you may need to schedule a hearing exam (or an exorcism) before school starts up again.