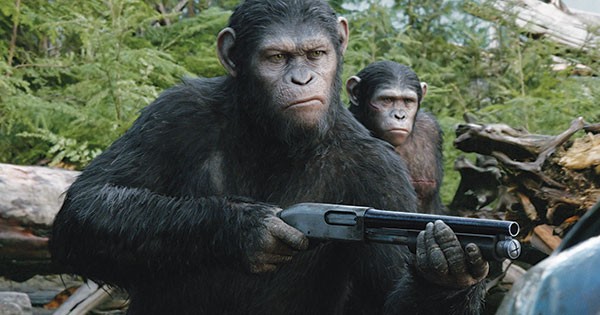 Dawn of the Planet of the Apes, July 11

We've barely finished complaining about the snow, and soon we'll be seeking the relief of an air-conditioned movie theater. Here's what you can expect to see this summer while enjoying a cool-down.

Some of your favorites are back: X-Men: Days of Future Past opens May 24; catch up with the amusing fire-breathers in the animated How to Train Your Dragon 2 (June 13); and in what we can only hope is the end, Transformers: Age of Extinction drops on June 27. On July 11, it's Dawn of the Planet of the Apes (July 11), a.k.a. now the apes are in control; July 18, get ready for murder day, in The Purge: Anarchy. Bruce Willis is back in Sin City: A Dame to Kill For (Aug. 22), four tales adapted from Frank Miller's graphic novels, and all the other old-guy action stars just keep on ticking in The Expendables 3 (Aug. 15).

Two comedies also return: 22 Jump Street (June 13), in which undercover cops pose as college students, and Think Like a Man Too (June 20), where the planned weddings are sure to hit snags.

Lots of fantasy action and adventure this summer, starting with Maleficent (May 30), Disney's take on the Sleeping Beauty villainess, starring Angelina Jolie. On July 18, see Jupiter Ascending (July 18), a sci-fi actioner from Lana and Andy Wachowski (The Matrix); Dwayne Johnson stars as the Greek he-man in Hercules, opening July 25. Guardians of the Galaxy hits the big screen on Aug. 1; Chris Pratt stars in this comics-based action adventure. Aug. 8 is when you can meet Lucy; Scarlett Johansson is a juiced-up warrior in Luc Besson's actioner.

Thrillers opening this summer include: Edge of Tomorrow (June 6), set in a war-torn, time-looping future, and starring Tom Cruise and Emily Blunt; Life of Crime (Aug. 29), adapted from Elmore Leonard's The Switch; and The Most Wanted Man (August), a John Le Carré spy tale starring the late Philip Seymour Hoffman.

Summer laughs kick off cowboy-style with A Million Ways to Die in the West (May 30), from Seth McFarlane (Ted). On July 2, Susan Sarandon and Melissa McCarthy take a trip to Niagara Falls, in Tammy; Sex Tape, a comedy starring Cameron Diaz and Jason Segel and — oops — a viral video, opens July 25. For law-enforcement chuckles, the Teenage Mutant Ninja Turtles (Aug. 8) are still keeping the crime rate low in NYC, and two guys dressed as cops for a costume party are mistaken for real police in Let's Be Cops (Aug. 13).

Other light fare includes: Jersey Boys (June 20), Clint Eastwood's adaptation of the popular musical; Begin Again (July 18), a sentimental tale of musical redemption starring Mark Ruffalo, from John Carney (Once); and Magic in the Moonlight (July 25), a rom-com from Woody Allen, set in the French Riviera.

On Aug. 1, check out Wish I Was Here, Zach Braff's Kickstarter-funded follow-up to Garden State, and Chadwick Boseman steps into the shoes of the hardest-working man in show biz, James Brown, in the bio-pic Get on Up. And while it will be sweet and funny, be sure to bring plenty of hankies to the much-anticipated The Fault in Our Stars, the teens-with-cancer dramedy shot in Pittsburgh; it opens June 6.

In early June, Pittsburgh Filmmakers will host a series of eight free art-related documentaries (subjects range from photography to puppetry) in conjunction with the Three Rivers Arts Festival. Also booked for Filmmakers: the Texas-set drama Cold in July (May 30); For No Good Reason (June 6), the doc about illustrator Ralph Steadman; the restored version of the 1964 Beatles' comedy A Hard Day's Night (July 4); Ai Weiwei: The Fake Case (July); and Richard Linklater's document of a childhood, Boyhood (Aug. 1).

The warmer weather means area drive-ins are open, and Pittsburghers can also walk to several city parks for outdoor films: The Cinema in the Park series returns on June 7, with recent and classic family faves including Frozen and E.T. And at the Oaks Theater, in Oakmont, the annual Moonlit Matinee series of classic films mostly from the '80s (Stand By Me, Lethal Weapon) begins this week.