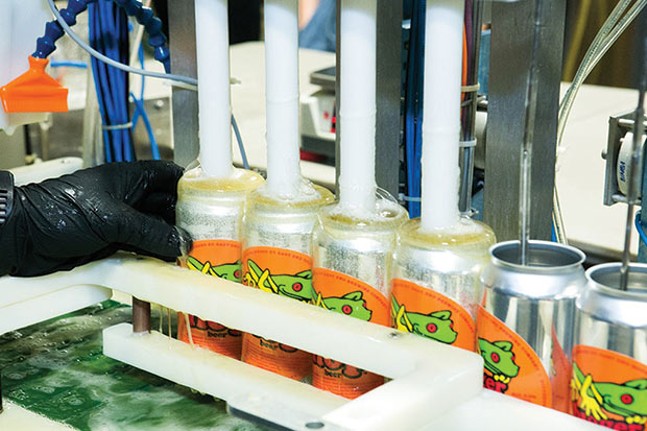 In 1962, Pittsburgh Brewing Company introduced the pull-tab beer can, forever changing the way Americans drink beer. Instead of using a church key to punch a hole in the top, drinkers could simply pull a ring and instantly enjoy their Iron City. The innovation caught on quickly, and it didn’t take long for brewers across the country to start packaging their suds in pop-top cans.

As cans grew in popularity, they became associated with cheap, mass-produced beer. For years, cans were the domain of watery American lagers, while fancier imported options were packaged in bottles. When the craft beer movement took off in the 1980s, brewers nearly always packaged in bottles — enhancing the idea that high-quality beers don’t come in cans.

Colorado’s Oskar Blues is largely credited with changing that mindset. In 2002, it released the hugely popular Dale’s Pale Ale, and Oskar Blues continues to package all of its beer exclusively in cans. Other brewers caught Oskar Blues’ aluminum fever, and canning is now the preferred method of packaging for many of the country’s trendiest breweries. Craft beer fanatics flock to can releases and swap cans of hazy IPAs like baseball cards.

So, why all the love for cans?

“Modern cans are superior in nearly every way,” explains Andrew Witchey, owner of Dancing Gnome. “They are significantly better for the overall quality of the beer.”

Though beer quality is the primary reason for the shift towards cans, they offer other benefits as well.

“Cans are much lighter and stack more densely than bottles, so they are easier to ship,” explains Scott Smith of East End Brewing, which recently began distributing a number of their year-round beers in cans.

He points out a few less obvious advantages as well: cans cool down faster, don’t break as readily, and are more easily recycled than glass bottles. And you can’t beat the convenience of cans.

“Everyone here at Grist House lives an active lifestyle and we like to take beer with us on our adventures,” owner Brian Eaton explains.  “Cans make that much easier and safer than bottles.”

Whether as less weight in a hiking pack or for a decreased chance of broken glass by the pool, cans are ideal for summer.

And though modern brewers favor cans, bottles still have their place in the craft beer scene. As Witchey notes about bottles: “they feel more regal or elevated in their quality.”

Many brewers still package certain beers, such as barley wines and Belgian styles, in bottles. And while I love a can, I can’t imagine drinking a bourbon barrel-aged imperial stout from one.