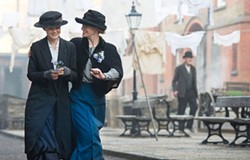 Sarah Gavron’s docudrama puts viewers into the mix of the burgeoning British suffragette movement in the early 20th century. There is a fleeting glimpse of the movement’s leader, Emily Pankhurst (Meryl Streep), but the story focuses instead on efforts to rally working-class women to the cause.

Women like Maud (Carey Mulligan) and Violet (Anne-Marie Duff), who toil in miserable East London laundries, and also face the demands of raising children and managing a household. The right to vote promises at least a chance at agency — a collective means that could push back against workplace harassment and inequal pay, as well as secure legal maternal rights and a wider chance at social, economic and political opportunity.

Gavron’s film is a fine piece of cinematic broccoli, in that it is handsomely produced, well acted and wholly edifying to the point where it feels often more nutritious than delicious. It focuses primarily on Maud’s slow conversion from disinterested to tentative to manning the barricades and risking it all. It’s such a rote form of plot development that none of it is very surprising or inspiring. (On the other hand, Brendan Gleeson, as a detective dedicated to breaking the women’s movement, has a nice moment when his character has a shift in perspective.) Mulligan suffers sweetly as Maud, but she never quite sells the privation and misery that the narrative turns on; Duff is fantastic as the harder, more impassioned Violet.

Still, it’s an important and oft-neglected piece of history, and even with its PBS-style steadiness, it should prove a fascinating window for those unfamiliar with the suffrage movement. And in an election season, it’s worth the reminder that for half of us, being able to vote was a hard-won right.