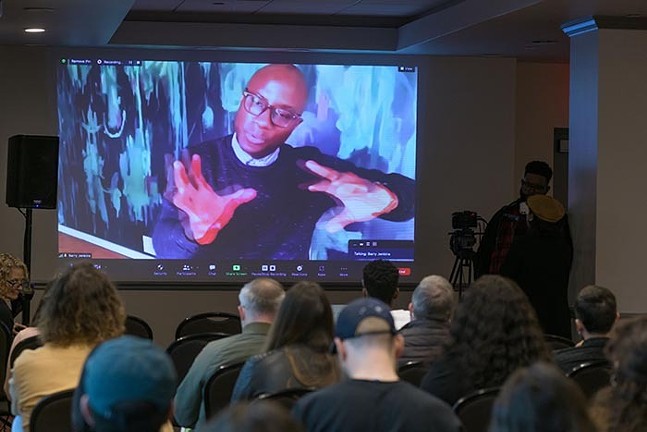 Photo: Courtesy of Film Pittsburgh
Academy Award-winning director Barry Jenkins addresses a group of filmmakers at the 2021 Pittsburgh Shorts Filmmaker Conference.
Are you a filmmaker looking for somewhere to show your work? A major Pittsburgh film organization just put out a call for submissions for two upcoming local festivals.

Film Pittsburgh announced that it is now accepting films for both the Three Rivers Film Festival and Pittsburgh Shorts and Script Competition. The back-to-back events, both of which take place this coming November, also offer the opportunity for applicants to win prizes, network, and meet with industry professionals.

TRFF is one of the largest annual arts festivals in the city, delivering local premieres of national and international feature-length films, as well as being a platform for the local film scene. The Pittsburgh Shorts and Script Competition is described on the Film Pittsburgh website as showing the “best contemporary short films from around the globe, highlighting films that promote innovative visual storytelling and cultural tolerance.” The Script Competition awards cash prizes to the best scripts, all of which are judged by industry professionals.

“Last year, we got hundreds of incredible films and scripts, and our programming team had a lot of hard decisions to make,” says Film Pittsburgh executive director Kathryn Spitz Cohan. “We're expecting the same level of quality with this year's submissions and can't wait to see them. We're particularly excited to see the local films and scripts that come in. There is so much talent in the region and based on past years, we expect the quality of local submissions to be very good.”

In addition to the festivals, a Filmmaker Conference offering workshops, panels, and more will also take place.

Photo: Courtesy of Film Pittsburgh
Filmmakers Kevin Maxwell (left), Hadassah Curry (center), and Alec Silberblatt (right) on the red carpet at the 2021 Pittsburgh Shorts and Script Competition
The 2021 festivals marked a return to in-person programming after screenings went digital due to the spread of COVID-19. While many of the selections at both the TRFF and Pittsburgh Shorts and Script Competition came from around the globe, some were locally made, including Cyril, a documentary produced by Pittsburgh Playwrights Theatre Company.

Venues for the event have yet to be announced.