Fillings range from traditional to unconventional, plus dessert pierogies 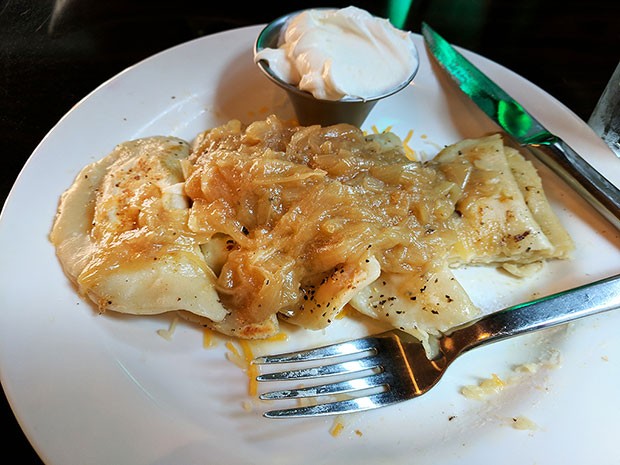 It’s no secret that Pittsburghers love pierogies. So it was only a matter of time before a pierogi-themed establishment was added to Downtown’s burgeoning food scene.

Last month saw the opening of Stuff’d Pierogi Bar, a restaurant specializing in a variety of takes on Pittsburgh’s favorite comfort food. The pierogies here are made from local ingredients, and prepared traditionally (boiled and sautéed) or deep-fried.

While Stuff’d does offer tried-and-true fillings such as potato and cheddar cheese, and potato and sauerkraut, more adventurous diners should investigate the eatery’s more inventive preparations. There are buffalo-chicken pierogies, filled with buffalo-chicken dip and topped with a hearty serving of chicken and hot sauce. Or how about breakfast pierogies, filled with egg and cheese, and served with a sunny-side-up egg, a side of bacon and topped with maple Sriracha syrup. At Stuff’d, it’s not just what’s in the pierogies, but also what’s served on top of them.

There’s a selection of salads too, which, of course, come topped with pierogies. And if somehow you weren’t already full from everything else, Stuff’d offers dessert pierogies with flavors like jalapeño caramel apple.

Stuff’d makes for a great lunch spot for workers, or a place to grab dinner before a show in the Cultural District. But it also has the feel of a neighborhood bar, perfect for grabbing a drink before a game at the nearby stadiums. And if you’re in the mood for a Bloody Mary, that too comes with a pierogi on the side.

Speaking of Stuff’d Pierogi Bar , On The Side