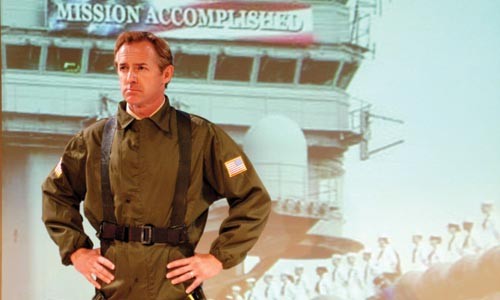 A job well done: David Whalen plays George W. Bush in PICT's Stuff Happens. Photo by Suellen Fitzsimmons.
In The History Boys, playwright Alan Bennett has history teacher Mrs. Lintott upbraid her young male students with this: "Can you for a moment imagine how depressing it is to teach five centuries of masculine ineptitude? History is a commentary on the various and continuing incapabilities of men."

In Stuff Happens, playwright David Hare provides Mrs. Lintott with two hours and 45 minutes of dramaturgical support: A gaggle of self-important and, frankly, loopy men (and one woman) start down a path of ideology, political self-preservation and school-yard bravado and wind up in a field of destruction and death. It would all be painfully funny except that the men include George W. Bush, Tony Blair and Donald Rumsfeld at the start of the Iraq war.

Hare has taken the public statements of such politicos, tossed in a few scenes of imagined private dialogues, and created a blistering look at how we all ended up in this Olympian disaster.

Living through history is a dreadful experience, not least because you can never have a clear picture of the forces shaping your own life. Stuff Happens lets us step back and look at the flow of those events. And the true brilliance of Hare's work is that he never lets us forget that at every juncture, each man involved had the opportunity to stop the rush of history he was helping to (mis)shape.

This is especially true for Colin Powell, Hare's nominal "hero." As presented here, Powell is a man of exceptional dignity who, when push comes to partisan shove, makes a case for the war at the United Nations using information that he knows isn't true ... or, at least, that it is speculative at best. Finally, Powell cannot, or will not, accept responsibility for his actions, which helped lead to the deaths of thousands of American soldiers and hundreds of thousands of Iraqis, and of any chance for peace and democracy in the Middle East for generations.

With the possible exception of U.N. inspector Hans Blix, nobody comes out well in Stuff Happens. Tony Blair is a clammy schoolboy who can't understand why the cool kids avoid him; Bush begins as the cowboy-wannabe of received opinion, but Hare neatly grows him into a lethal mystic answerable only to divine voices. Dick Cheney, Paul Wolfowitz and George Tenet are murderous thugs in Savile Row suits, and a supremely reality-challenged Rumsfeld is, remarkably, the play's comic relief. Or would be ... if this flake hadn't also been Secretary of Defense.

When a play has a scope this mammoth, it is of the highest praise to say that the Pittsburgh Irish & Classical Theatre production, thanks to Andrew S. Paul's direction, keeps it earth-bound and precise. The script is about the all-too-human choices made by all-too-human men, and this production never lets us lose sight of that.

It's impeccably acted as well, with laser-beam performances by a uniformly excellent cast including David Whalen as Bush, Doug Mertz as Blair and Allen Gilmore as Powell. Larry John Meyers is positively creepy as Cheney; Richard McMillan's Rumsfeld is a hoot of twisted humanity; and Martin Giles plays French Foreign Minister Dominique de Villepin with a wicked, side-splitting glee.

Watching a bunch of men destroy everything and everyone around them isn't, perhaps, a novel experience. But with the PICT production of Stuff Happens, it's never been more necessary ... or entertaining.