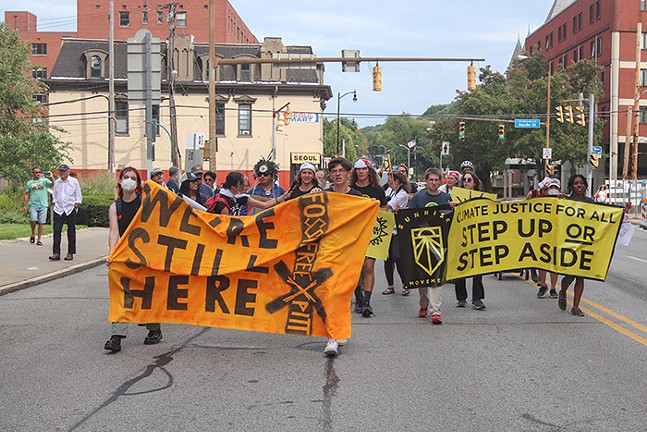 The Youth Strike for Climate Justice — organized by students from area high schools and colleges, including CMU, the University of Pittsburgh, and the Pittsburgh Youth Climate Council — demanded that local government and academic institutions halt research on “false solutions,” such as Hydrogen and Carbon Capture Utilization and Storage, and to call for universities to divest from fossil fuel interests.

The rally was part of a three-day action, planned in response to this week’s Clean Energy Ministerial in Pittsburgh, where CEOs, world leaders, and activists are set to discuss clean energy technologies. Critics of the event, like those leading today's march, say the solutions put forward there will "perpetuate the fossil fuel era," and dispute the definition given of clean energy technology.

Vanessa Gonzalez-Rychener, a 16-year-old student from Winchester Thurston School, was one of today's organizers. She arrived at the rally with a banner bearing the signatures of her peers who join her in demanding a stop to research on hydrogen capture technology and divestment from fossil fuels. 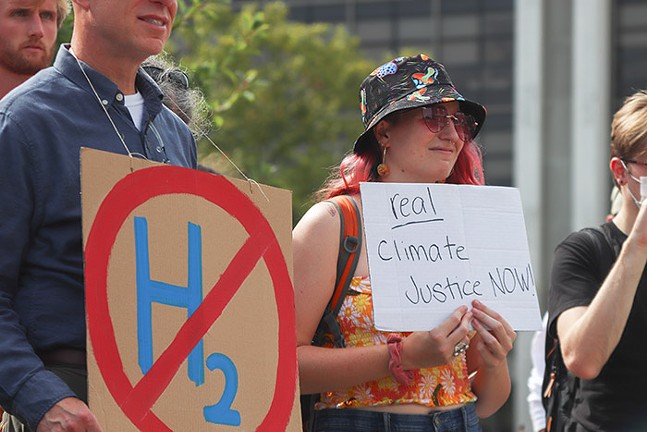 Carbon capture is a proposed technological solution to reduce harmful emissions and “decarbonize” the economy that would trap and permanently sequester carbon emissions from the production of hydrogen, a clean energy carrier. Critics of carbon capture say the necessary technology doesn’t yet exist, making carbon capture merely a concept instead of a plan.

“I've just been kind of working for the past two years to help get people involved in climate action, and I'm here representing my school and all these people who signed, trying to push for a future that's livable for my generation and the next generation,” Gonzalez-Rychener tells Pittsburgh City Paper.

She says she’s frustrated with endless meetings that lead to little or no progress and wants leaders at the Clean Energy Ministerial to see the urgency of the climate crises as it appears through younger eyes.

“Because we need to do everything we can now,” she says. “We need to get everybody involved. While I’m talking to kids at my high school, we need to also get the higher-ups. We need everyone in this, and we need to take fast action now.”

“I don't know about you all, but I am tired of being exploited for profit by the fossil fuel industry,” said Hunkler at the start of the rally, addressing the growing investment in Hydrogen and Carbon Capture Utilization and Storage.

In addition to calling for a halt to carbon capture technology investments, speakers also laid out demands for changing the way local universities invest their sizable endowments.

“We're currently fighting for complete divestment from the top 200 largest fossil fuel companies,” says Pitt student Emma Gray of the Fossil Free Pitt Coalition. “We're asking Board of Trustees members with conflicts of interest to abstain from the vote. We're asking for more transparency on the investment process and the inclusion of the Pitt community in this decision. And, above all, we're asking Pitt to reinvest at least 1% of its endowment back into those most disproportionately harmed by the fossil fuel industry.”

Gray said Fossil Free Pitt representatives plan to sit outside Chancellor Patrick Gallagher’s office in the Cathedral of Learning from 3 p.m. to 5 p.m. every Friday “until we get proper action.”

Protesters were joined by an intergenerational group of Indigenous climate activists from several nations, including Lummi and Navajo, who transported a 14-foot totem pole from their home in Washington state to Pittsburgh for this week’s convergence.

Cedar George Parker, one of the Indigenous activists, addressed the crowd from the back of a pick-up truck hauling the totem pole.

“Before I go to any city, I tried to look up the problems there,” Parker said. “And it really broke my heart. It broke my heart, reading about Pittsburgh. I put my hands up for all you guys fighting for the lands here. I want to honor you guys.”

Parker stressed the importance of humans working to care for the Earth around them. “We have to [stand up] for the deer who can't speak any human language, we have to do it for the orca whales, all the whales, all the birds," he said. "It's up to us to stand up and speak for them."