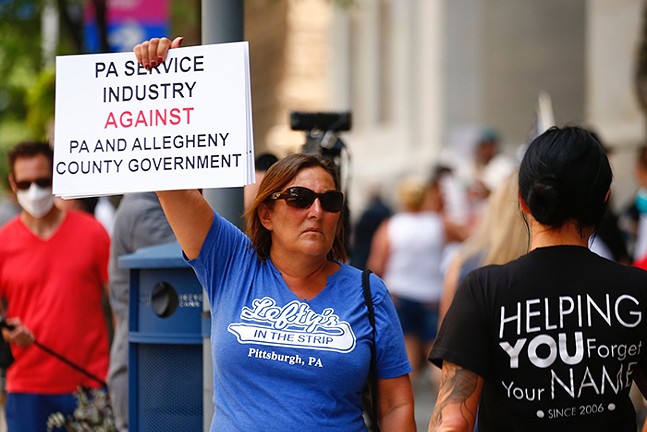 CP photo: Jared Wickerham
Lefty's worker at a protest in July in Downtown Pittsburgh
Lefty’s in the Strip was ordered to close this Friday by the Allegheny County Health Department for breaking COVID-19 safety restrictions. The bar in the Strip District will be required to stay closed for at least seven days and to submit a COVID-19 prevention plan before it reopens. This comes less than two months after workers at Lefty’s attended a protest calling for COVID restrictions to be lifted, and a worker told Pittsburgh City Paper that they believed ACHD statistics were fabricated.

According to the health department website, “multiple violations” of COVID-19-related rules were witnessed including being over capacity indoors, failure to distance, and failure to provide a meal with alcoholic beverage service. The health department also found that people were gathering and not distancing outside near the premises.

The inspection report shows that while the COVID-19 indoor capacity of the bar is 22 people, the inspector saw 33 people inside Lefty’s, not including those waiting in line for take-out drinks, who were also too close together. Customers were observed getting drinks after they had finished their meals, which is not permitted under the current regulations.

The bar’s owner, Rick Krist, said in an interview with the Pittsburgh Post-Gazette on Monday that he has “requested a formal sit down” with the health department to discuss the case.

Lefty’s has been featured prominently in a number of recent COVID-19 safety controversies. Back at the end of June, when new cases in Allegheny County were spiking into the triple digits, a photo of the bar taken by a WESA reporter went viral on Twitter. The building was packed with people sitting close to the bar, none of whom were wearing masks.


This is Lefty’s in the Strip right now. This is why everything is closing. I went to get a six pack to go at the proper counter and four people came up and touched me (not unusual at bars for women, but still) because they were so close. No one is wearing masks. No one. pic.twitter.com/ODSKkPKP90

Shortly afterward, Allegheny County Executive Rich Fitzgerald ordered all county bars to close and restaurants to stop allowing the on-site consumption of alcohol to mitigate the spike and avoid further spread. More than 40 people attended a protest in Downtown Pittsburgh at the beginning of July against COVID-19 restaurant restrictions, including some people who identified as Lefty’s employees.

A protester there, who identified herself as Pepper and said she works at Lefty’s, told CP that she didn’t “believe their stats,” referring to the coronavirus case numbers counted by the county health department.

“I am not saying the virus isn’t real, just don’t believe their stats,” she said.

Protesters wearing Lefty’s In The Strip shirts hold up signs as passing cars go by along Grant Street. @PGHCityPaper pic.twitter.com/KcfLWpt4Vm