"It's pretty exciting, two iconic places getting displaced, and then they join forces." 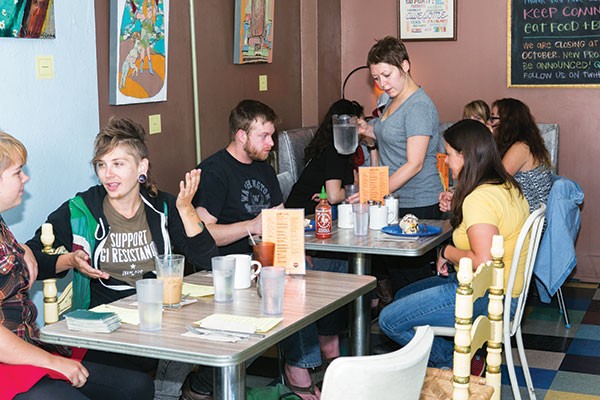 When news first broke this month that the Quiet Storm was closing, some city leaders were as surprised as fans of its Sunday brunch.

Established in 2001, the beloved Penn Avenue coffeehouse and vegetarian eatery suggested new possibilities for the once-struggling business district straddling Friendship and Garfield. As a mural by Tarish Pipkins proclaims on its exterior wall, the Quiet Storm promised "progress no losses." But suddenly, it seemed, change wouldn't be quite that painless.

Yet the Quiet Storm may not be about to abate, and while owner Jill MacDowell may be out, she's not down. She's already seeking a new location— and in the meantime joining another displaced East End pioneer: Justin Strong, who until recently ran East Liberty's much-lamented Shadow Lounge and its sister bar, AVA.

Next month, Strong plans to open a new location for AVA in the old Luna Bar, on Oakland's North Craig Street. MacDowell will run the kitchen. And like Strong, whose club was a key part of rewriting people's perceptions of the long-blighted Penn Circle area, she's looking forward to moving into yet another scruffy business district.

"What I love about work is the uphill climb," MacDowell says. "It's pretty intoxicating to say, ‘We really did help turn this area around.' It would be exciting to do that again."

The Quiet Storm will close sometime in October (no date has been set, though MacDowell says, "I think it would be nice to go out on a Sunday brunch"), when it celebrates its 12th anniversary. But MacDowell and Strong are already looking ahead.

"It's pretty exciting," says Strong: "two iconic places getting displaced, and then they join forces."

The Quiet Storm was opened by Ian Lipsky at a time when Penn Avenue neighborhood businesses struggled amid shuttered storefronts. MacDowell, a food caterer and former editor of alt-weekly In Pittsburgh, came on board to serve brunch in September 2002. (By then, In Pittsburgh had been shut down and purchased by City Paper.) By the time she bought Lipsky out in 2005, the Quiet Storm had weathered some hard times: In 2004, management even flirted with making ends meet by selling shares to the community.

Penn's improving climate brought changes of its own. In 2007, MacDowell pulled the plug on live music, prompted by newly built housing next door. This year, she cut out dinner hours, responding to the arrival of new restaurants that "were doing great dinners — and serving booze."

But dark clouds began gathering on the horizon last November, MacDowell says, when the building's owner, Friendship Development Associates, put her on a month-to-month lease. The community group, which is going out of business, is winding down its real-estate holdings: By 2013, it was offering tours of the building to potential buyers. This summer, the FDA has agreed to sell the building to Greenfield-based Szmidt's Old World Deli.

"I feel like I've been in limbo," MacDowell says. "Customers were asking me what was going on, staff was asking me."

Nor could the Bloomfield Garfield Corporation, which has been filling the void left behind by FDA, offer much help — despite its best efforts. The Quiet Storm "drew another generation to Penn Avenue, a generation that wouldn't have found its way here otherwise," says BGC Executive Director Rick Swartz. But finding a new home for it, he adds, "was tougher than anyone imagined": Building owners, encouraged by Penn Avenue's changing fortunes, were "holding out for some ransom. ... [S]uddenly the wind is scented with money."

And while MacDowell says Swartz's efforts showed "how much love there was" for Quiet Storm, "I had to start looking for parachutes." So she reached out to Strong, who closed AVA this June, citing steeper rents in East Liberty's rapidly gentrifying business district. After talking for a couple hours, MacDowell recalls, "We were both looking at each other: ‘Quiet Storm by day, AVA by night!' And we clicked glasses."

Strong says he's contracting with MacDowell to "operate the café side of things," providing breakfast and lunch during daytime, and food for bar patrons at night. An opening date has not been finalized: MacDowell says Oct. 20 is the target, depending on whether the kitchen is up and running. "I'm not going to do it until we're ready."

MacDowell says that a few favorites from the Quiet Storm menu — and its beloved coffee — will make the move to North Oakland. She also pledges to "do my damndest" to protect the jobs of her 16 full- and part-time employees. But patrons will notice changes. Perhaps chief among them: The menu — which MacDowell says will feature "global comfort food with an emphasis on fresh and local" — will incorporate meat. Quiet Storm has previously focused on vegetarian and vegan offerings, but in North Oakland, its already popular brunch will soon feature bacon and sausage.

Both entrepreneurs say North Oakland presents familiar challenges. Strong says it "reminds me of the early days in East Liberty: There's still this hesitation and grit about the neighborhood."

The area may also be a stepping stone to elsewhere. MacDowell says she and Strong have committed to a six-month affiliation, "and then we'll re-evaluate" how things are progressing. Both she and Strong, after all, are looking down the road to new homes for their flagship businesses.

Strong says that while operating AVA, he hopes to find a permanent home for the Shadow Lounge, AVA's better-known and older brother. That way, he says, "we could continue on the iconic path that it was on" as a venue for hip hop and other performances.

MacDowell, too, is looking for other locations to reopen under the Quiet Storm banner. That location could also open as soon as this October, she says, or perhaps not until 2014. The affiliation with AVA, she says "is a way station at least." But "I think we're going to reopen somewhere, some way."

There's certainly no shortage of public officials willing to help. The day after City Paper broke the news of Quiet Storm's closing online, Pittsburgh City Councilor Bill Peduto, the city's likely next mayor, pledged to assist MacDowell any way he could. "Any place that was where Penn Avenue was 15 years ago needs to have [an] anchor like that," said Peduto, who called Quiet Storm "the Ritter's of a new generation."

MacDowell has been visiting potential sites in city neighborhoods — sometimes in the company of community leaders. Among the contenders: Warrington Avenue in Allentown.

With growth taking root in nearby Mount Washington and the South Side Slopes, "We've seen a lot of market movement in those areas," says Aaron Sukenik, executive director of the Hilltop Alliance, a community-development group.

But while "there's a lot of people coming up there, there isn't a coffee shop," he adds. "Quiet Storm was such an anchor business for the East End, and we think it could do the same thing here."

Of course, no matter where Strong and MacDowell go, there's a risk of ending up in the same place: back on the street.

"Most of us who start businesses in neighborhoods that we want to help develop go into this thinking that if we turn it around, we will be set," says Amy Enrico, whose Highland Park coffeeshop, Tazza d'Oro, is credited with revitalizing its own environs. But "once development hits, very few of us can stick around. When you've got all the new shiny stuff going on, that's when you're most vulnerable."

"Keeping these entrepreneurs in the neighborhood is very important to the fabric of that community," Enrico says. "We can't forget the legacy these people left behind."

"There is a certain irony" in people like MacDowell ending up on the curb, says state Sen. Jim Ferlo (D-Lawrenceville), a board member of the city's Urban Redevelopment Authority. "But we don't live in a socialist system where the government controls private property." If you don't want to be displaced, Ferlo says, "owning your own building is critical."

That's a lesson Strong has taken to heart, which is why he wants to re-create Shadow Lounge in a building he purchases. Based on the city's burgeoning real-estate market, he says, "There's maybe a two-year window before stuff gets out of reach — at least from my perspective."

MacDowell, for her part, is philosophical about being displaced. "I don't look at this as the end of anything," she says. "These places are just buildings." For that matter, "it's never just been about the tofu." Customers "also come for something else, and I don't know if I can take credit for it. They come for a state of mind. And the sad thing would be for the magic to go away, because it can't find a home."