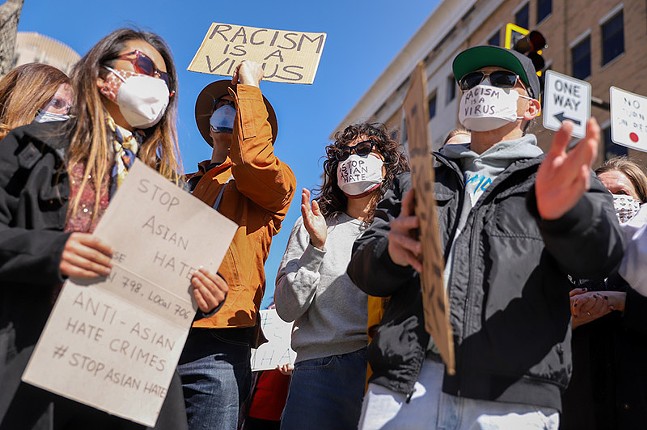 CP photo: Kaycee Orwig
Demonstrators gather in Oakland during a protest against anti-Asian racism on Sat., March 20, 2021.
More than 300 people gathered in Oakland on Sat., March 20 for a “Stop Asian Hate” protest against anti-Asian racism. Thrash the State, a skate collective run by queer people of color and trans and gender nonconforming people, organized the action.

The protest was organized in response to the March 16 shooting in Atlanta, Ga. where a 21-year-old white man shot and killed eight people, six of whom were Asian women. Thrash the State’s Jake B., who began organizing the protest two days ago, wanted to give people a space to talk about their feelings, grieving, and shared trauma. 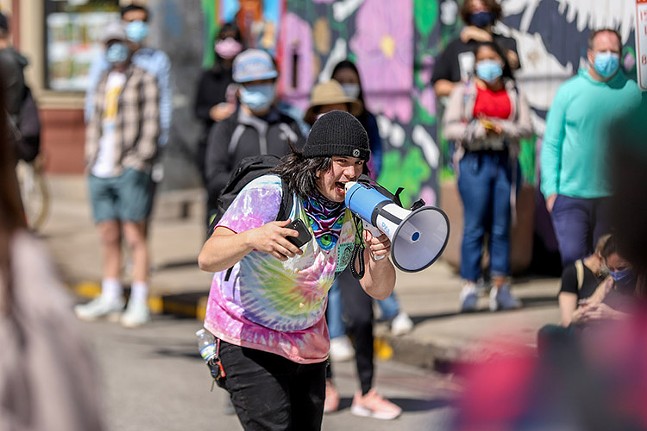 CP photo: Kaycee Orwig
Jake B. of Thrash the State, organizer of the Stop the Asian Hate protest in Pittsburgh's Oakland neighborhood, addresses the crowd on Sat, March 20, 2021.
“I’ve also been reading about the huge increase in hate crimes against Asians since the pandemic,” says Jake, a first-generation Filipino American whose mother immigrated to the U.S. when she was a child. “As an Asian person, I felt like it’s my responsibility to speak up about these things that are happening against Asian people in our country.”

People began gathering around 2 p.m., and at 2:10 p.m., bike marshals stopped traffic so that protesters could enter the intersection. Jake chose the intersection of Forbes and Oakland avenues for the protest because it is the location of many Asian-owned businesses, such as Chick’n Bubbly and Szechuan Express.

Approximately 250 people had arrived by 2:24 p.m., when Jake told the crowd about the history of Asian people in the U.S., including the 1875 Page Act and the 1882 Exclusion Act. They also thanked Black activists and celebrity actress Sandra Oh, who is in Pittsburgh filming the Netflix show The Chair, for attending and emphasized the intersection of the fight for Asian liberation with the fights for queer liberation, transgender liberation, sex worker liberation, female liberation, and environmental justice.

Jake invited anyone from the crowd to take the microphone and share their thoughts, which they felt was important to the event because, although they are Asian, Asians are not a monolith. Oh, who is Korean-American/Canadian, was the first to take the mic. 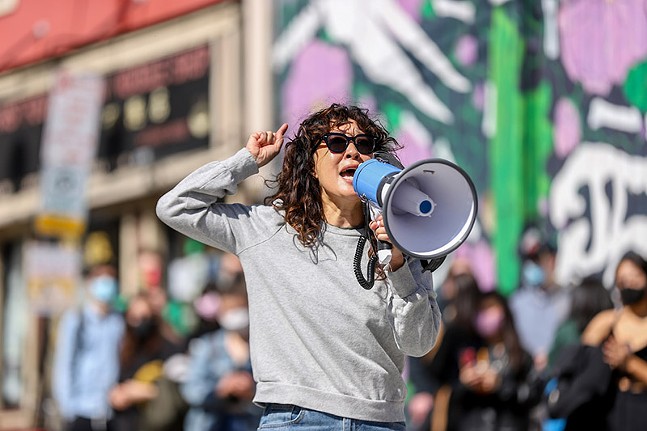 CP photo: Kaycee Orwig
Actress Sandra Oh, in Pittsburgh filming for Netflix, spoke to the crowd during a Stop Asian Hate protest on Sat., March 20, 2021.
“For many of us in our community, this is the first time we are even able to voice our fear and our anger, and I really am so grateful for everyone willing to listen,” Oh says. “I know many of us in our community are very scared, and I understand that. And one way to kind of go through and get through our fear is to reach out to our communities.”

Oh then declared, “I am proud to be Asian!” and “I belong here!” and encouraged the crowd to say it with her because “[m]any of us don’t get that chance to be able to say that, so I just wanted to give us an opportunity to be able to shout that.” Asian people in the crowd took up the chant, and a later speaker thanked Oh because they had never said those words before.

Nearly 30 speakers took turns speaking, ranging from high school students to PhD students to community organizers. Many were Asian and shared their experiences with anti-Asian racism, including bullying over their eyes and getting called racial slurs, and their thoughts on the Atlanta shooting.

Asian women also shared their experiences with the intersections of their gender and race, emphasizing the ways Asian women are fetishized and assumed to be submissive. A Chinese Carnegie Mellon University PhD student and sex worker spoke about the importance of focusing on mental health in the AAPI (Asian American and Pacific Islanders) community and invited people to attend a day of community wellness organized by the Pittsburgh chapter of Sex Worker Outreach Pittsburgh. She also read the names of all of the Asian women who were killed: Soon Chung Park 박순정, Hyun Jung Grant [김]현정, Sun Cha Kim 김순자, Yong Ae Yue 유용애, Xiaojie Tan 谭小洁, and Daoyou Feng 冯道友. 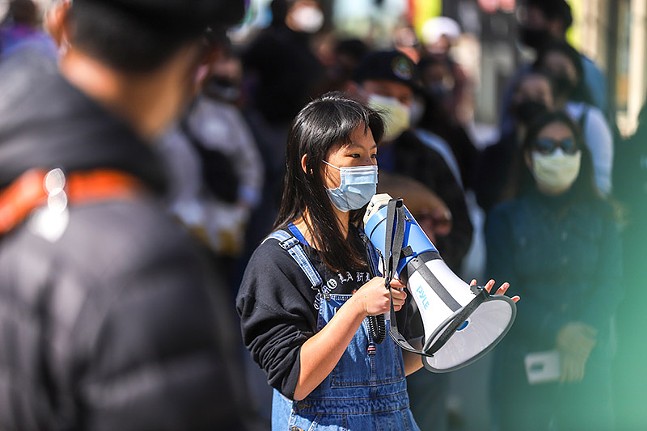 CP photo: Kaycee Orwig
Amanda, a local high school student, addresses the crowd during an anti-Asian racism protest in Oakland on Sat., March 20.
A representative from Red Canary Song 红莺歌, a grassroots collective of Asian sex workers and allies, spoke about how, regardless of whether the women killed identified as sex workers, they were affected by racialized misogyny. She also shared demands from New York-based sex workers, including that the “legal working rights of Asian massage workers must be protected.”

Some Asian people in attendance were international students who identify as Asian, rather than Asian American. One was an international student at CMU who says she “did not come here to be called a chink” and that “as long as there’s still white supremacy, this is never gonna end.”

A community organizer emphasized the connection between the Atlanta shooting and gun safety issues in the U.S., encouraging people to learn more and get involved in local gun safety legislation. Tyler Phan, an anthropology professor at the University of Pittsburgh, also attended the protest with his son and spoke about the history of white supremacy in the United States. 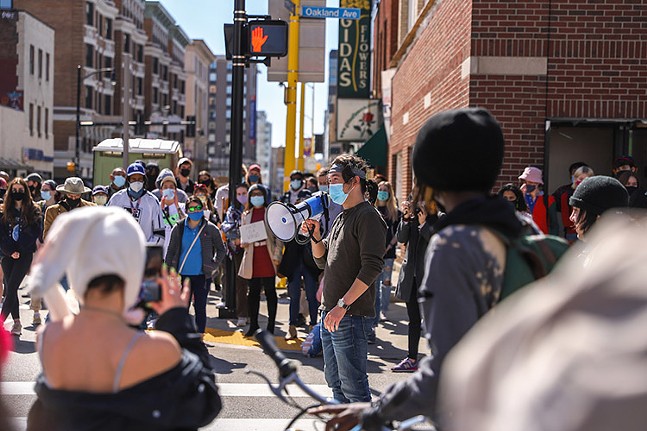 CP photo: Kaycee Orwig
Pittsburghers gather in Oakland for the Stop Asian Hate protest on Sat., March 20.
“This country was founded on systematic inequality,” Phan says. “You think the killings last week is representative of some aberration? The killings last week are the foundation of this country. … This is an extension of colonialism. This is not an aberration.”

Speakers also shared ideas of what to do next, including getting involved in local politics, contributing to mutual aid, and supporting local Asian businesses and organizations, such as the Pittsburgh chapter of the Organization of Chinese Americans and the Asian American Heritage Committee. One speaker called for the firing of Jay Baker, the Cherokee County Sheriff’s Office captain who said Robert Aaron Long was having a “bad day” when he shot and killed eight people.

Another speaker encouraged young people to join the police to help prevent future police violence, although the following speaker pushed back against diversifying the police because “ultimately we are fighting against white supremacy, and … neoliberalism as an extension of white supremacy.”

Despite differing opinions on strategy, many speakers agreed that consistency in activism is important. Several speakers also emphasized that while people of color are disproportionately affected by white supremacy, white people are responsible for dismantling it.

Between speeches, Jake led the crowd in chants of “Stand and fight, they can’t divide us, Asian hate is the virus,” “All love, no hate,” and “Stop Asian hate.” Around 4:15 p.m., Jake announced that protesters would begin marching to CMU, and encouraged people to stay hydrated as another organizer led people in stretches that encouraged social distancing. 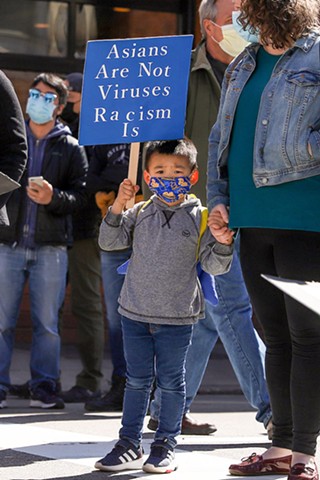 CP photo: Kaycee Orwig
A young person holds up a sign during a Stop Asian Hate protest in Oakland on Sat., March 20.
Although some people had dispersed, about 150 people remained as the group marched along Forbes Avenue. People held signs with phrases including “Hate never made America great,” “Racism is a system not an event,” “Stop Asian Hate,” and “Tolerating racism is racism.” The bike marshals stayed in front of the protesters, blocking off intersections along Forbes Avenue and separating them from the four police officers on motorcycles who stayed ahead of the protesters.

Jake and other protestors led chants, including “No hate, no fear, Asian people are welcome here,” “If we don’t get no justice, you don’t get no peace,” “No cops, no KKK, no racist U.S.A,” “You can’t stop the revolution,” and “The people, united, will never be divided.”

Protesters reached CMU’s quad around 4:37 p.m. and continued to walk through the campus to Flagstaff Hill, where a Black-led open mic was taking place. As protestors settled in, Jake called for a moment of silence for those killed in the shooting and said, “We cannot pick and choose when we show up,” before inviting people to check in with their Asian friends and support local Asian organizations, businesses, and GoFundMes. They also repeated their point about intersectionality and called back to a climate strike that happened the day before, after which they claim two plainclothes police officers arrested two people.

Most protesters dispersed, but about 40 stayed for the open mic, where people shared poems and songs. Local poet Guiseppe, who organized the open mic so that people could be together outdoors in a comfortable setting, encouraged people to follow them on Instagram for future community events.

“I’m ready to cry because I’m so humbled and blown away by the positive response,” Jake says. “I couldn’t be more thankful … But that’s the thing, it’s not about me, it’s about all of us in this together and this issue that we all share. The people united will never be divided … Love and solidarity.”