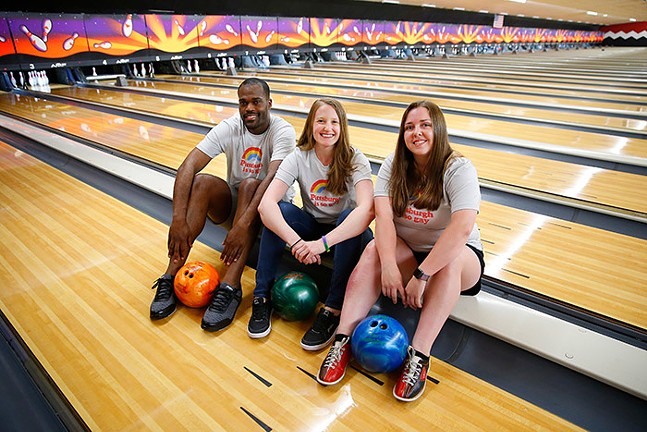 CP Photo: Jared Wickerham
Michael Gosha (captain of Balls Of Steel), Megan Entwistle (captain of Lickity Splits), and Lindsey Williams (captain of The Karen’s) wearing Steel City Clothing's "Pittsburgh is So Gay" Pride T-shirts.
At Stonewall Sports, it’s not about winning or losing, it’s about finding a place where you belong.

The recreational sports group, based out of Washington, D.C., and brought to Pittsburgh in the fall of 2014, aims to create a safe space for LGBTQ people and allies. The several Pittsburgh sports recreational leagues and a flag-football league are focused on providing LGBTQ individuals with an opportunity to play in a friendly environment. They are all run through the nonprofit Stonewall Alliance.

Stonewall Alliance executive director Rob Anderson says the recreational leagues are meant to provide socializing for LGBTQ people that extends out of the bar scene, which can be intimidating and exclusive to many in the LGBTQ community.

“It was not that common to have a recreational aspect outside of a bar environment,” says Anderson.

Local Stonewall sports and events include dodgeball, kickball, bowling, sand volleyball, bocce, and yoga, and are played in locations throughout the city including Arsenal Park in Lawrenceville, the YMCA in the Hill District, Noble Manor lanes in the West End, and Highland Park. Stonewall Alliance, which is run by volunteers, also organizes the Bridge City Flag Football league. The leagues, even without the intense competition, have grown in popularity over the years, and Stonewall has gathered about 3,000 people on its roster list, according to Anderson.

Stonewall’s most attended Pittsburgh season included 500 participants, and even this year with limited numbers to comply with COVID-19 restrictions, Anderson says Stonewall’s leagues filled up within seven minutes of opening registration. Participation is typically limited to people over 21 years old, but Anderson says Stonewall is looking to work with college and high school groups for possible inclusion.

“Our goal is to offer a recreational and non-competitive league. Like with bowling, many leagues usually have a cash prize package. We are just about bragging rights, maybe a small trophy,” says Anderson. “We try our best to offer sports on one day, and one location, so that people can co-mingle. By keeping them together, it builds the community.”

Kerry Long is the deputy executive director of the Stonewall Alliance. She met Anderson playing in Stonewall’s leagues and agrees with him that their purpose is about building community among LGBTQ people and allies.

“The basis of our organization is less about sports, and more about community, even though we are playing sports,” says Long. “We have quite a diverse group of transplants and native-born players, and there are leaders from both cohorts that are involved and engaged.” 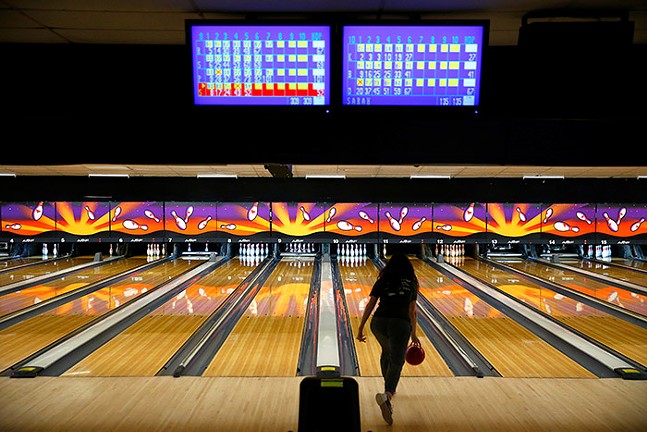 CP Photo: Jared Wickerham
Players bowl during the Stonewall Sports bowling league at the AMF Noble Manor Lanes.
Long says Stonewall’s most popular sport is kickball, which has a spring and a fall league. Dodgeball is also popular, and Anderson is partial to bocce because it offers the most time to socialize.

Stonewall Alliance is hoping to expand that community as much as it can in Pittsburgh. Long says that Stonewall sports leagues are open to allies, and they encourage allies joining and playing. Currently, the leagues are composed of about 20% allies.

Anderson adds that creating the Stonewall Alliance nonprofit has allowed them to organize and focus on inclusion efforts to attract a more diverse group of players. The nonprofit created a Diversity Equity & Inclusion committee last year, and Long says it has grown into one of Stonewall’s most important assets.

“We are making sure we reach all individuals, and to target and prepare to get more minority groups to join, whether that is trans or nonbinary or racial minorities,” says Anderson.

Both Anderson and Long know it’s not as simple as asking for more inclusion to achieve diversity. Long says the Diversity Equity & Inclusion committee has been leading the way in informing Stonewall about best practices and location choices to ensure more people feel comfortable joining the recreation leagues. 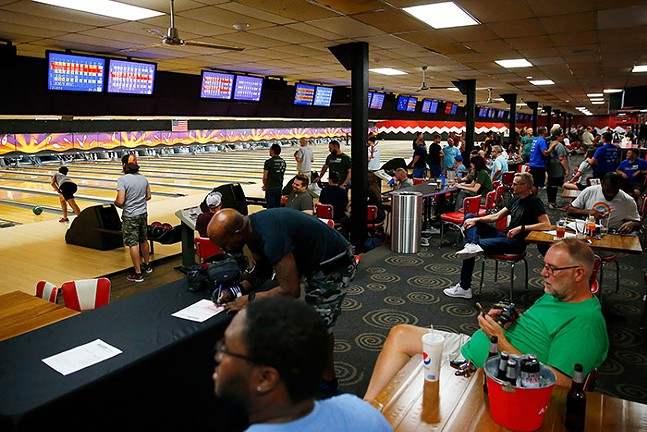 CP Photo: Jared Wickerham
Players bowl during the Stonewall Sports bowling league at the AMF Noble Manor Lanes.
Anderson hopes his own experience and success at Stonewall will inspire people hesitant of joining to give it a try. “When I was a kid, I hated dodgeball and I hated kickball,” says Anderson, who now regularly plays in both Stonewall leagues. “I don’t want people to feel like they are the last kid picked.”

And in an effort to bring in more people to play, Stonewall runs a Play It Forward fund that offsets registration fees for those who want to play, but can’t afford it. This year, Stonewall is working with local company Steel City Clothing to sell “Pittsburgh is So Gay” shirts, and proceeds contribute to the Play It Forward fund.

“We are looking at beefing up that Play It Forward fund and to grow that scholarship,” says Long.
Stonewall Sports Pittsburgh
stonewallsportspgh.org