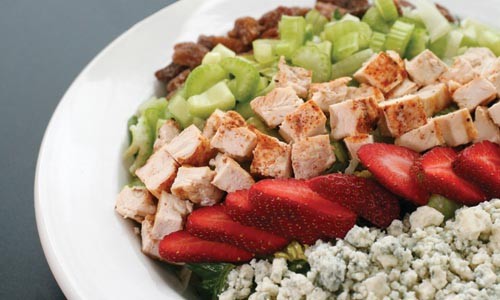 Just as good cooking often follows a recipe, successful restaurants often hew to a formula. True, some cooks and restaurateurs wing it -- and soar to success on the alchemy of intuition, word-of-mouth and luck. But most labor over an imprecise calculus of menu, ingredients, preparation, service, location and décor to achieve the golden mean of a satisfying dining experience. And for diners, first impressions of this effort feel particularly critical -- even if they are later proven wrong.

At StonePepper's Grill, near the Galleria in Upper St. Clair (and with another location in Mars), the striving to create a successful chain is palpable. Consider the tasteful yet ultimately uninspiring décor ("When in doubt, install another television," seems to be the motto), hyperbolic menu (the few months that StonePepper's has been open are hardly enough time for its burgers to become "famous"), and ready-made slogan ("Everybody must get StonePeppered!").

And while the menu looked appealing, it also looked, well, formulaic -- as if its creator had studiously emulated those national chains that populate airport concourses and mall parking lots. Instead of a coherent theme, it offered a panoply of pub grub and Southwestern-inflected appetizers, burgers and salads, along with the now-ubiquitous brick-oven pizza.

But the proof, as someone once said, is in the pudding -- or in this case, in those appetizers, burgers, salads and pizza. And at StonePepper's, darned if the ingredients for a pretty terrific meal weren't all right there.

Among the menu's tried-and-true offerings, we found a few glimmers of innovation. StonePepper's meatball sliders were a clever and well-executed twist on the mini-burger concept. Based on the name, we expected mini-burgers with meatball and marinara, but instead we got a slice of thick Italian toast topped with a split meatball and chunky tomato and pepper sauce with just a hint of spice. It was a savory knife-and-fork dish that riffed not only on hamburgers but, satisfyingly, also on meatball subs and Italian bruschetta.

Big Bang shrimp were mysteriously crispy without being deep-fried and served in a "spicy Thai chile sauce" which was neither spicy nor apparently Thai. Yet it nimbly balanced heat and sweet, delivering a kicky flavor that complemented the plump, briny shellfish. In this era of maple-glazed everything, we appreciated the kitchen's moderate hand with the sweetener. With some more lettuce and mu shu-style pancakes, these would make a great meal.

StonePepper's followed these tasty appetizers with generally well-considered, well-prepared main dishes. The bacon-avocado burger was fat and juicy, topped with greasy, apple-smoked bacon and vegetal avocado, though the bun was just ordinary. (Angelique also wondered why StonePepper's would choose to serve this burger with American cheese when the kitchen has cheddar available.) But the fries! The fries served alongside were so crispy in their tempura-like coating, they verged on crunchy. Even without ketchup, they were absolutely addictive.

Jason had the Southwestern steak salad, which he found a satisfying blend of hearty and light. Topped with tender, lightly charred filet, it was a fries-free variation on both the peculiarly Pittsburgh steak salad and the classic Cobb salad, with stripes of corn, beans, tomatoes and cheese atop chopped lettuce.

In a dining companion's creamy pesto pasta, heavy cream dampened the herbal taste of basil, creating a rich, if bland, medium for moist chunks of chicken. StonePepper's personal pizza Margherita was distinguished by a crust that was light and fluffy on the inside and delicately crispy on the outside, an unusual result from a wood-fired oven. An herbal tomato sauce and plenty of melted cheese made a credible, if not incredible, pie.

But as far as we were concerned, the best use of the oven was in StonePepper's signature dessert, cinnamon-bun pizza. This was the same light and crispy pizza crust layered with sweet cream cheese, cinnamon and buttermilk icing, making for a sweet and satisfying finish to the meal.

Though StonePepper's seemed calculated to be just another chain, it performed well with almost every dish we tried. Its kitchen relies on good proportions and expert preparations to make familiar fare stand out. Some restaurants are good enough to deserve more than a single location; StonePepper's is one of them.