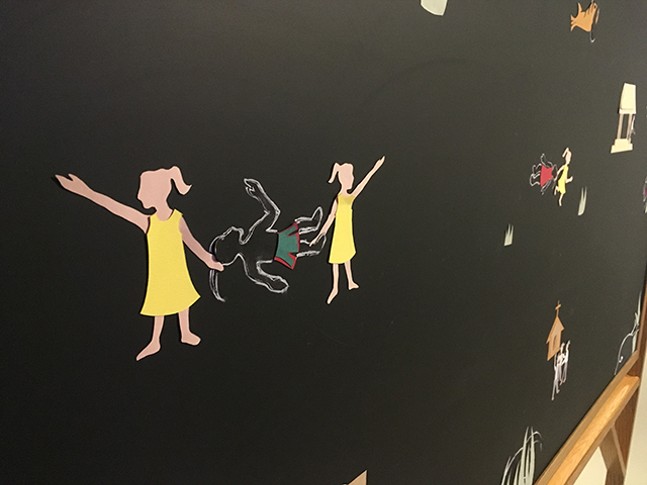 CP photo: Amanda Waltz
The Tales of Red Rag Rosie Chalkboard by Shervone Neckles
Race and Revolution: Still Separate – Still Unequal, the latest group exhibition at the August Wilson African American Cultural Center, opens with two pieces by artist JC Lenochan. On one wall hangs an old-school analog clock with the word “Race” replacing several numbers. A pile of textbooks leads to a chalkboard asking viewers to answer the questions “What was your race moment?” and “What was your class moment?” On the show’s opening day (April 27), replies were already scrawled on the work. “I went to a segregated movie theater,” says one. “While studying slavery in college, the entire class turned to me to start the discussion,” says another. Both statements encapsulate the Black experience, with the latter pointing to the show’s mission of exploring ongoing racial and economic disparity in the U.S. education system.

Curated by Larry Ossei-Mensah and Katie Fuller, Race and Revolution originally launched in 2017. On view until July 21, the show raises awareness of how, six decades after U.S. Supreme Court's landmark Brown v. Board of Education of Topeka ruling, schools are more segregated than ever, with studies finding that students from marginalized groups lack many of the resources given to their white counterparts.

CP photo: Amanda Waltz
US Citizenship Test Sampler by Aram Han Sifuentes
To localize the show, various placards detail the history of legal disputes over educational discrimination in the Pittsburgh region, with one as recent as 2017. Also included is the now-famous poem by Antwon Rose II, a Black teenager who attended Woodland Hills High School before being fatally shot in 2017 by a white police officer.

Personal experience informs much of the show — in addition to Fuller and Lenochan, the featured artists are either students or have educational backgrounds. Found throughout are miniature classroom scenes from Carina D. Maye, an adjunct professor at Georgia State University. Her work comments on the inequity in standardized testing, with subtle details hinting at disorder among the charming, delicate little chairs and books fit for a dollhouse. New York-based special education teacher Uraline Septembre Hager sends a clear message with Like Feeding a Dog His Own Tail – the installation, a tiny desk caged in black fencing, is an obvious reference to how children of color from segregated schools are more likely to end up incarcerated. 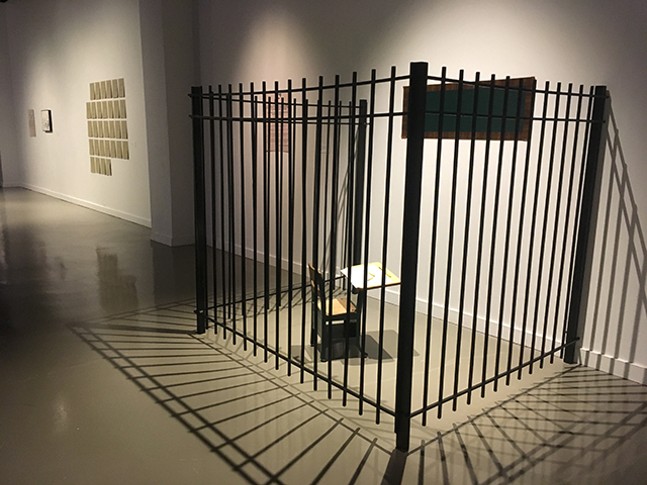 CP photo: Amanda Waltz
Like Feeding a Dog His Own Tail by Uraline Septembre Hager
There’s also Mona Kamal’s I was an Adjunct, a series of lined notebook pages featuring handwritten accounts of the Algerian-born artist’s difficult life as an adjunct professor. On her website, Kamal says the work “points out the inequalities that exist within the American school system for both the students and a professor who is working part-time at one or several colleges.”

Some works go for a more childlike approach. The Blackmoors Collage series, with its many brightly-colored plexiglass shapes held together with exposed nuts, bolts, and other fasteners becomes all the more impactful when you notice the panels hanging from silver coat hooks familiar to public school classrooms and lockers. With its squares of hand-stitched text and images, U.S. Citizenship Test Sampler captures the immigrant experience by recalling samplers used in Colonial America to teach young children needlework and the alphabet. The Tales of Red Rag Rosie Chalkboard depicts the history of slavery and racist violence in the U.S. with featureless white paper dolls (one is dressed as a Ku Klux Klan member) committing horrific acts against Black paper dolls. The scenes are countered on the opposite side of the chalkboard with a hopeful image of a young Black girl in a red dress, her back to the viewer, her small, outstretched hand clutching a piece of chalk. 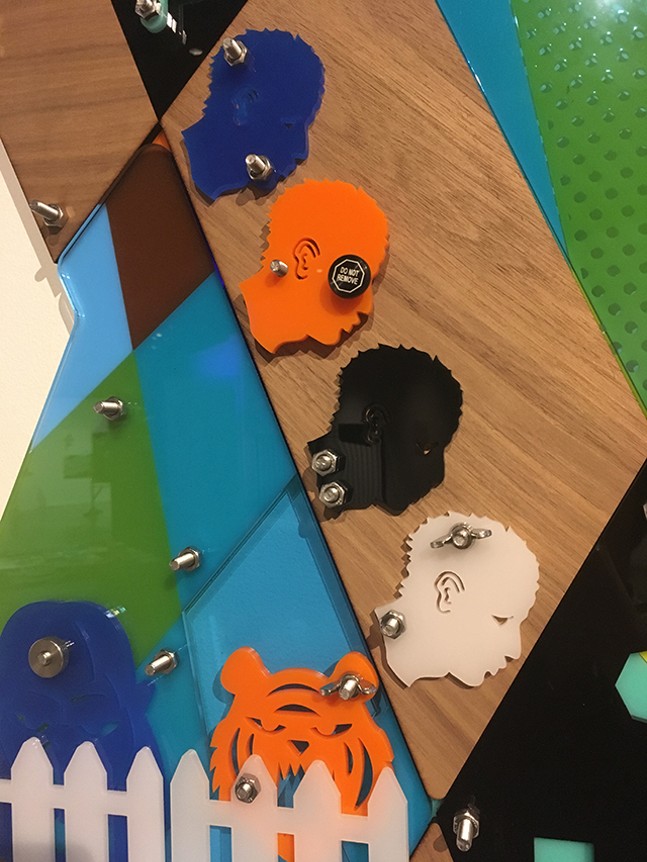 CP photo: Amanda Waltz
Blackamoors Collage series by Damien Davis
Not to be overlooked are additional pieces by Kayla Muldrow, Michael David Battle, and Marvin Touré, whose work Year One-Two invites viewers to take from a pile of newspapers with blank cover pages.

Compared to the center’s previous show Familiar Boundaries. Infinite Possibilities, which featured towering pieces and audio-heavy installations, Race and Revolution is quieter, more contemplative, as if trying to simulate the ideal classroom environment it wishes were afforded to marginalized students in America. As if to confirm this, a small reading area outfitted with leather coaches and shelves of various books by authors of color sits tucked away in a corner. Perhaps viewers will use the space as an opportunity to take a seat, reflect on what they’ve seen, and learn valuable lessons from work by people who have experienced first-hand the harmful gaps in our education system. 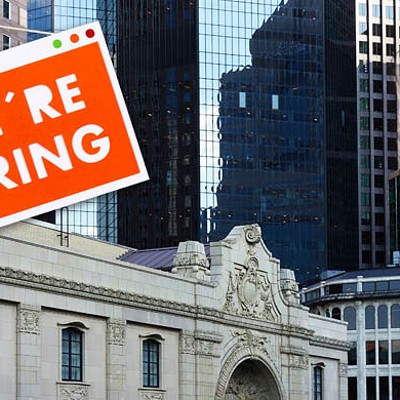