Steven Haines is a microcinema presenter. What is that?! 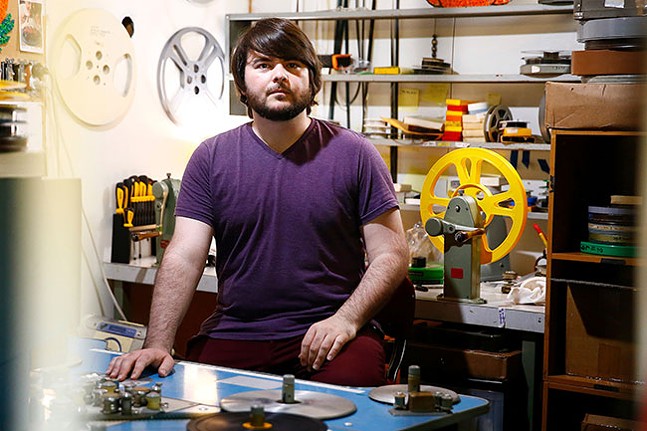 [Films] from flea markets, estate sales, thrown in the trash. Educational and industrial, home movies, put together in programs — ephemeral stuff not screened elsewhere. I’d say the golden era is the '60s, '70s, '80s. Every school had films, they all went in the trash and filtered into people’s hands. I have a lot of mid-century stuff,  probably the earliest I have is late '20s.

At which time film would have been expensive.

This collection is all shot by the same person over about 15 years, and you can tell it’s a well-off family — on vacation, attending events, leisure activities. You didn’t really see working class stuff until after WWII, when it became more affordable.

Who do you do programs with?

Independently, and also for Jump Cut, who the next event is for on the Fourth of July at Glitter Box.

Is there a specific type you concentrate on?

I’m keeping it as expansive as possible; I don’t want to box myself into a corner. I hesitate to say that I’m more interested in one form or another because I watch everything. I like to think I’m really anti-snobbery. I go home and watch Netflix romcoms, to the Waterfront to see Hollywood blockbusters. But what I really like to look at is what’s overlooked otherwise. There’s plenty of stuff in my collection that probably doesn’t exist anywhere else, made and distributed to schools and workplaces around the country 50 years ago that at some point nobody cared about and thought was trash. I like the idea of keeping it around and sharing it with audiences.

How’d you get started?

I’ve gone to flea markets my whole life. I had random films acquired over the years, then at some point got my first good projector. I thought, "I need films. Where are the films?"

How do you turn them into a program?

I have dozens and dozens of program ideas. I want to be respectful. I don’t want to contextualize in a way that pokes fun at the footage or makes light of the situation. I get in an iffy area when it comes to chopping up films. I consider myself a preservationist, but sometimes you have a print that’s compromised, that’s beat up in a number of ways, so I can chop it up. I think, "Can I put together some kind of hodgepodge show of clips, one thing working off something else in an unusual way?" It’s heavily curated. I take notes on everything, practical notes on condition, but also [ask], "Could this fit in a particular program?" I keep all the notes on just a fraction of my collection, the ones I’ve watched.

You have ones you haven’t watched?

How many in total do you have?

Um. Some thousands? That’s one thing ... I really need an inventory.

Do you know what you’re buying when you buy it?

Home movies are cool because so much is mundane and typical, but then you’ll have something totally unexpected and completely delightful. The collection from the '20s has so much leisure footage in there, which has its own kind of interest — Coney Island, classic fun stuff. But the gentleman who shot those also had a penchant for catching footage of disasters, so occasionally a shot of people relaxing on the beach will be interrupted by footage of a house fire. Where else do you find that kind of juxtaposition?

You really wouldn’t be expecting a house fire.

Pretty much every time I thread up the projector, I have no idea what I’m going to see.