Steve Jobs: Man in the Machine

Alex Gibney looks at the career of the late Apple head Steve Jobs, and asks what it all means for us

Steve Jobs: Man in the Machine 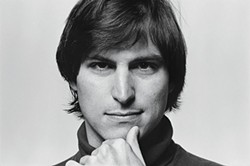 This man wants to sell you a phone: Steve Jobs

Alex Gibney, the award-winning documentary filmmaker (Enron, Taxi to the Dark Side), takes a look at the co-founder, visionary and CEO of Apple, Steve Jobs. Steve Jobs: Man in the Machine isn’t one of Gibney’s muckraking pieces: It’s reminiscent of The Armstrong Lie, his 2013 examination of the Lance Armstrong scandal. In both films, Gibney asks: Who are these extraordinary flawed people we mythologize, often blindly, and what makes us complicit in this process?

Gibney constructs his film — on one level a basic biographical profile of Jobs and Apple — from archival footage, supplemented with contemporary interviews with former colleagues and business journalists. Much of it is familiar to anybody who has kept tabs on Jobs’ career.

Jobs remains a fascinating figure of irreconcilable dualities: the kind of rich guy who quotes Bob Dylan at shareholder meetings. Gibney ponders: “Behind the scenes, Jobs could be ruthless, deceitful and cruel. Yet he won our hearts by convincing us that Apple represented a higher ideal. It was not like other companies — it was different.”

Indeed, the best parts of the film are when Gibney steps back from bio-doc mode and asks: What about us? How did we capitulate to the Apple myth, pushed by Jobs, that this money-grubbing, mega-huge, bad-practices global corporation wasn’t that? That by purchasing a $500 factory-made phone we were somehow exerting our own individual wonderfulness? How did our inseparable gadgets connect us emotionally to a man we’d never met? When Jobs died in 2011, there was a “global wake” (#thankyousteve), as strangers clustered outside Apple Stores, holding iPads on which they had “lit” a “candle.”

Some interviewees cite Jobs’ gift for storytelling, or for selling the future. But perhaps most critically, Jobs’ pitch linked the user to the product with an explicit intimacy — a “personal computer,” a machine that was you. So now we love our iPhones as valued component of ourselves, these miracles of man-machine symbiosis, defined by as many vexing dualities as Jobs was. They connect and isolate us from each other and the world; they free us from time and place, while enslaving us to them. (Gibney describes his own constant compulsive reaching for his iPhone as being “like Frodo’s hand to the ring.”)

So, maybe we reach for Apple’s slogan: “Think Different” (presumably created before the availability of grammar apps). The proliferation of Apple products has certainly impacted most of our lives. Whether for good or bad is likely too binary, as well open to interpretation. But we can all agree that our iThings have made this LifeThing different.