Photo: Courtesy of Westmoreland Museum of American Art
Declaration & Resistance artist Stephen Towns
The subjects of Stephen Towns: Declaration & Resistance, the latest exhibition at The Westmoreland Museum of American Art, range from barbers to military workers to nurses, all to highlight the role African Americans have played in the United States economy throughout history.

On view through May 8, the solo exhibition features 35 new figurative paintings and story quilts by Towns, a Baltimore-based artist whose body of work is described as expanding the “historical narratives of enslaved and free people who toiled under the most extreme hardships yet persevered through acts of rebellion, skillful guile, and self-willed determination.” This particular show, which spans from the late 18th century to present day, explores industries such as coal mining, agriculture, domestic labor, and others.

The Westmoreland says the show will be grounded with several existing works, including Towns’ installation quilt “Birth of a Nation,” to “provide the foundation for the creation of Town’s new series of quilts that give voice to textile, culinary, and agricultural workers.”

In a statement, Towns says Declaration & Resistance began when he was quarantining in spring 2020.

“I thought about how I had the privilege to take a step away from my work,” says Towns. “When I returned to my studio, I reflected on how I had gained a deeper appreciation for essential workers risking their lives in the midst of a global health crisis.”

His appreciation led to the show’s focus on nursing, a theme that connects to how the COVID-19 pandemic “highlighted the racial disparities that continue to plague the country.”

Towns, who was born in 1980 in Lincolnville, S.C., adds that he came from a long line of laborers in Georgia and South Carolina, and prior to being a full-time artist, worked many “laborious jobs.”

“This show is a testament to my ancestors and also the coworkers I have befriended along the way," he says.

The show’s themes are no stranger to Pittsburgh, where the early steel industry was notorious for exploiting Black laborers, often employing them to replace striking white workers, and then firing them once the strike ended and the white workers returned. Also related to the city is Towns’ focus on Elsie Henderson, a Black cook who worked for several wealthy Pittsburgh families, including the Kaufmanns of the famous department store.

The examination of racial disparities in American labor continues with The Coal Miners, a series of six mixed-media paintings that feature “Black miners of West Virginia who were relegated to the most difficult, underpaid, most dangerous and insecure jobs.”

The collection of all-new work was organized by guest curator Kilolo Luckett in collaboration with Towns. Luckett, who serves as founding executive director and chief curator of Alma|Lewis, an arts platform dedicated to Black culture, says she has always been “very committed to questions around American patriotism, exceptionalism, and labor.”

“I’m also interested in querying the foundations of belonging and access, and unsetting some of the assumptions we have,” says Luckett. “Through his beautifully imposing quilts and mixed-media paintings, Stephen offers viewers sobering truths and tender stories of Black life that break away from dominant narratives that continue to plague society in the United States of America.”

Declaration & Resistance also expands on Towns’ practice as a textile artist and self-taught quilter, skills previously showcased in his first museum exhibition Stephen Towns: Rumination and a Reckoning. Exhibited in 2018 at The Baltimore Museum of Art, the show was described by Baltmore magazine as using a series of quilts to “explore how slavery has impacted modern life.”

The unpaid labor of enslaved Africans in the U.S. appears in Declaration & Resistance as well in a portrait of Ona Judge. Once enslaved by President George Washington, Judge served as a seamstress to the first president’s wife, Martha. As a teenager, Judge, according to records, fled to New Hampshire and lived as a free woman, later being interviewed about life on Washington’s Mount Vernon plantation. 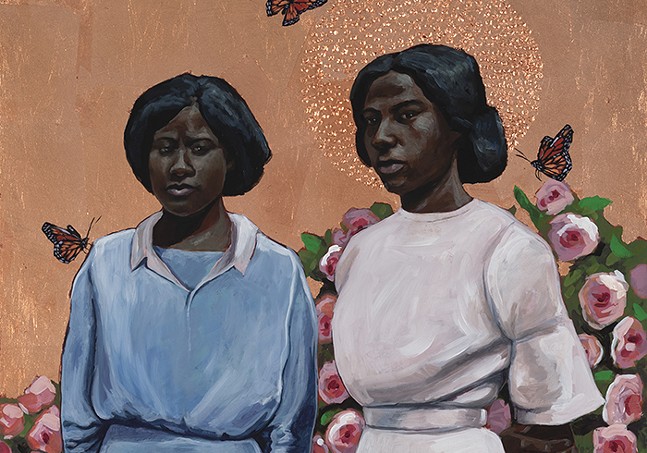 Photo: Courtesy of Westmoreland Museum of American Art
“Two Roses” by Stephen Towns, part of Declaration & Resistance at Westmoreland Museum of American Art
Coincidentally, the theme of quilts appears in another current solo exhibition at the Westmoreland, Cultivation: Journey of the Work. The show features Tina Williams Brewer, an African-American, Pittsburgh-based artist whose quilts are described as being “embellished with symbols and articulated with rich colors and patterns that have personal and cultural meanings, acting as a reminder of the often-obscured African-American story.”

In addition to the exhibition, a short documentary film on Towns is being produced by Eleven Stanley Productions, a company founded by Pittsburgh-based photographer, filmmaker, and multimedia producer Njaimeh Njie. Guests can also participate in a number of events organized by The Westmoreland to enhance Declaration & Resistance, including an evening with Erica Armstrong Dunbar, author of Never Caught: The Washingtons’ Relentless Pursuit of their Runaway Slave, Ona Judge.

Overall, Anne Kraybill, the Richard M. Scaife Director and CEO of the Westmoreland, believes Declaration & Resistance provides a new perspective, as well as context to many of the museum's existing pieces.

“At the core of our permanent collection are scenes of industry, highlighting the labor of this region during the big steel era,” says Kraybill.
Stephen Towns: Declaration & Resistance. Continues through May 8. Westmoreland Museum of American Art. 221 N. Main St., Greensburg. Free. thewestmoreland.org