“I am trying to work on many different things and see what works best for me.” 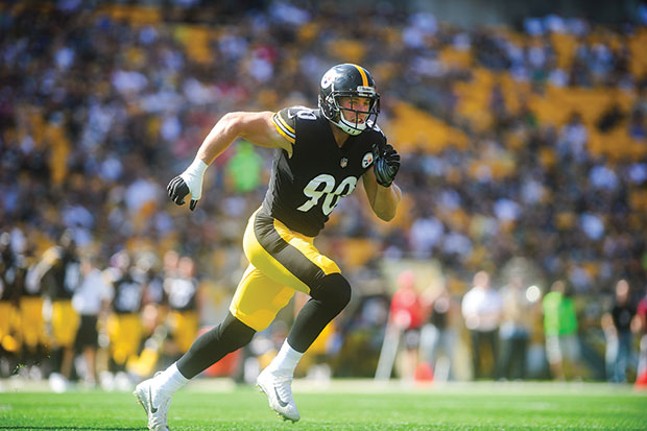 When defensive end J.J. Watt was drafted by the Houston Texans out of the University of Wisconsin, in 2011, there was a lot of excitement and speculation about how good the first-rounder would be. The answer, we now know, was extremely good.

Flash forward six years and his little brother, T.J. Watt, makes a splash as an outside linebacker, also for Wisconsin. But while he was projected to be a first-round pick, there wasn’t as much hype surrounding this younger Watt. Everyone expected him to be capable and come along slowly, learning to play the right outside-linebacker position at the pro level behind 39-year-old James Harrison.

But a funny thing happened on the way to the bench. T.J. Watt took to the pro game faster than most people thought he would. The NFL saw what he could do for the first time in the Steelers’ Aug. 11 preseason game against the New York Giants. Watt tallied three solo tackles and two sacks. He was effective in both passing and rushing defensive schemes. That game was on a Sunday. By Wednesday, Steelers linebackers coach Joey Porter announced that Watt was going to be the right-side starter opposite second-year pro Bud Dupree, sending Harrison to the bench. It took a couple of months, but the T.J. Watt hype-machine is already up and running.

And while that preseason game was Watt’s coming-out party to the public, he has already been showing coaches what he can do. At training camp on Aug. 9, the Steelers running backs were squaring off in one-and-one drills with the linebackers. Rushers, mostly Fitzgerald Toussaint and veteran backup Knile Davis, had little trouble getting through or around their defensive counterparts, except for Watt. For most of the drill, he was extremely successful at tracking the ball carriers, rarely falling for run fakes and usually bringing down his man. That was the game plan against the Giants.

Watt’s performance did fall off a bit in the team’s second game,against Atlanta. He recorded four tackles, but didn’t get a sack and he seemed ineffective in the pass rush. The performance was probably good, though, from a developmental standpoint. While no one expected T.J. Watt to be like his brother, his early camp performance may have given some fans lofty expectations. But whether he becomes James Harrison’s replacement this year or even next, the confident linebacker’s effort so far has shown that he has the talent to be a dominant outside rusher and an important part of the Steelers’ defensive plans.

Known for his pass rush at Wisconsin, Watt is working to get those skills NFL-ready, as well as work on other skills that are important to the Steelers’ game plan, such as using linebackers to drop back into coverage when necessary.

“Obviously, people know me for my pass rush, but at the same time, I feel like I can really improve and open some eyes in my pass coverage, and try to break up some passes and cover some guys,” Watt told reporters early in camp. He added: “I’m not expecting to be successful at each and every attempt, and that’s why it’s training camp. I am trying to work on many different things and see what works best for me.”