Steel-Man: The Movie offers a thoroughly Pittsburgh take on the superhero 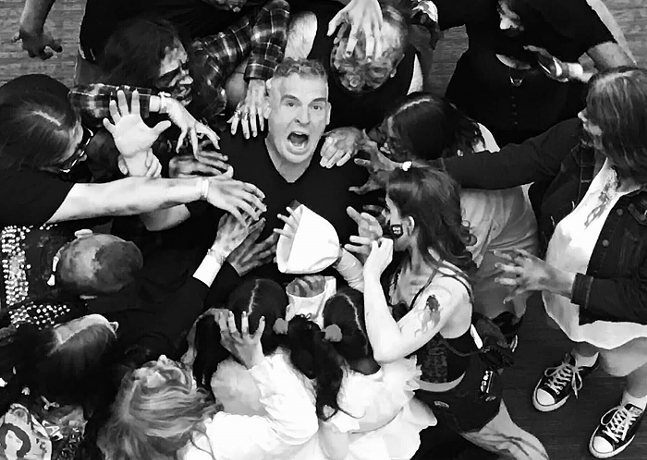 Courtesy of Mike Palmer
Zombies surround Mike Palmer of Steel-Man: The Movie
If you had to boil Pittsburgh down, “Steel, a DIY attitude, and zombie films” wouldn’t be a bad place to start. In that vein, filmmaker Mike Palmer is covering all his bases.

Palmer’s debut feature film Steel-Man: The Movie is a Pittsburgh production to its very core. The film — which debuted at the Pittsburgh Independent Film Festival last week and will see its world premiere at the Oaks Theater on Sun., Aug. 22 — is a labor of love years in the making for Palmer.

Tickets for the Oaks Theater screening are currently sold out, according to the Oaks website.

Every scene of Steel-Man oozes Pittsburgh. The plot follows the titular superhero hosting his annual comic book convention when he has to battle an onslaught of the undead, as well as a local criminal underworld.

Palmer says he got the idea for Steel-Man from a Steelers game many years ago. Seeing a man dressed in a Steelers Jesus costume, he thought “How could I make a great costume like that? Could a better costume be made? And if so, what would it look like?” And so, Steel-Man was born.

Steel-Man is based on a series of comic books also written by Palmer. Inexplicably, Palmer claims the superhero is also based on “real life," a statement that could be referring to his appearances as the Steel-Man, in full costume, at local events and charity functions.


STEEL-MAN the Movie - 38 sec Trailer from pittsburghsteelman on Vimeo.

Perhaps, most impressively, Palmer’s engineering background played a role in getting the film made. The costume was built from parts that he acquired during his time working for the steel mills, and almost every set was built from scratch by him.

The production also included saving a bit of local film history. An elevator used in a famous scene from George A. Romero’s horror classic Dawn of the Dead was removed from the Monroeville Mall. Palmer helped rebuild the elevator to use in Steel-Man, then donated it to the Living Dead Museum now located in the mall.

This ambition runs throughout Steel-Man, which is massive in scope. Those who viewed it at PIFF experienced a shorter, edited-down version, but there are also versions that run from over two hours to over four hours. The latter includes four faux trailers, seven commercials, and four music videos. All of this in a film that cost $5,835 and has 230 named acting credits.

For Palmer, however, he just sees it as another step for someone who has been dabbling in just about everything he can for years now.

“Michael Mann once described film as a melding of science and art," says Palmer. "I am a seasoned scientist, engineer, and artist, and Steel-Man is my synthesis of that. This ... demonstrates what is possible with creativity, determination, and passion.”