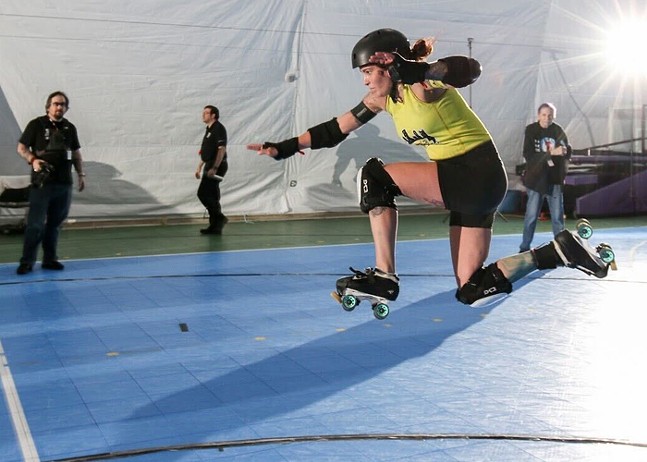 Taking place Sat., Oct. 22 at the Pittsburgh Indoor Sports Arena in Cheswick, Pa., Flavortahn Throwdahn will celebrate the international roller derby community’s return to play after a long pandemic hiatus. It also highlights some of the changes that have taken place within Steel City Roller Derby, recognized as the only flat-track women's league in Pittsburgh.

"So the Flavortown concept is kind of just like an homage to the goofy origins of the sport," Steel City Roller Derby president and development board chair, Morgan Rothacker, tells Pittsburgh City Paper. "So it's a very intense sport. It's very strong people. It's very fast-paced, but it's also really silly and goofy and fun. So we're trying to get back to that while things are kind of low-key and just bringing back the fun of it."

The league will host teams from Missouri, Michigan, and New Jersey for the tournament launched as part of the Women's Flat Track Derby Association’s Back On Track Global Event Series. A press release describes the series as a “re-emergence of the sport that will showcase a variety of roller derby events from around the world, taking place during the traditional postseason tournament time period of August through November.”

Rothacker says there are over 330 roller derby leagues across the world. In the past, Steel City Roller Derby has traveled to Canada and Europe to compete.

“So it's a fully international sport, which is super cool,” adds Rothacker, who competes under the name Harmin’ Sandiego.

The skater-owned and operated nonprofit league first hit the track in 2006 and has since produced home teams with notable names like The Bitch Doctors, the Hot Metal Hellions, The Slumber Party Slashers, and the Wrecking Dolls. The league welcomes players of all ages and abilities to participate in the full-contact sport, where points are earned based on how well a "jammer" passes the opposing team's four blockers.

Rothacker says that, currently, Steel City Roller Derby boasts three teams consisting of about 60 skaters that range in age from 19 to women in their 50s. She says the league attracts an array of women with different experiences and backgrounds, including parents, teachers, and health care professionals. “So yeah, it's really all over the place, which is great,” says Rothacker. “It's cool to see such a weird sport uniting so many different people.”

This variety of backgrounds, Rothacker says, led Steel City Roller Derby to shut down when COVID-19 first reared its head in March 2020. “We have a lot of caregivers and parents in our league, and obviously, you want to prioritize their safety and well-being.” 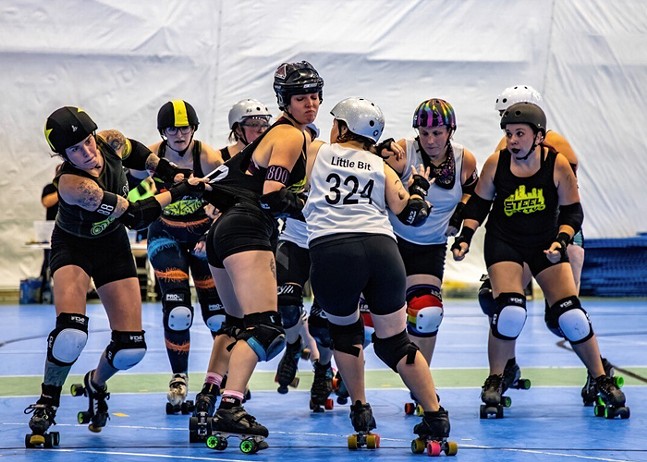 Photo: David Dyte
Steel City Roller Derby competing in State College, Pa.
Still, the time off gave the league time to adjust its approach in ways that would make the sport more accessible to a wider variety of women. Rothacker says they began to focus on the “equity aspects of our league, really making sure that we're being more intentionally accessible.” To achieve this, she says they developed a diversity and inclusion committee to ensure they are “being as inclusive as we advertise ourselves to be.”

They also made other significant changes, particularly in regard to recruitment. Rothacker says that, prior to the pandemic, the league would only do recruitment once a year in the fall.

“And that really kind of alienated a lot of people,” she continues. “So let's say someone wanted to join in December, we had to say, ‘oh, sorry, wait until August.’"

Now, the league offers rolling recruitment and starts new players off on its development team, where they can learn the ropes from both new and veteran skaters.

The effort adds to what was already a fairly accessible climate. She says that, while Pittsburgh boasts a wide range of women’s sports teams in football, rugby, ice hockey, and other arenas, roller derby endures as a place where anyone can join.

“So we have a lot of really great women's sports,” says Rothacker. “But something that I think is different for us is, a lot of people who play in those leagues, played in high school, played growing up. A lot of people who join roller derby start cold. … So it's very much a community. You’re learning the sport together. You're falling together.”

The league members also put together Flavortahn Throwdahn, touted as the first large-scale event for Steel City Roller Derby since 2016. From the names of the ticket packages to a Guy Fieri costume contest, the event will pay homage to the famed Diners, Drive-Ins and Dives host known for his flame shirts, frosted tips, and love of small, independently-owned eateries.