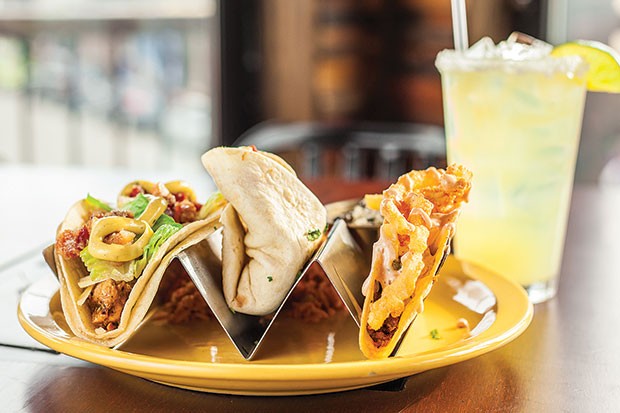 Local is an important concept in dining today, but it can be at odds with diners’ appetites for authentic international fare. Fortunately, in Pittsburgh, we have a shorthand for making any restaurant concept or cuisine sound like it belongs right here: Just add “steel” to its name.

Thus, Steel Cactus can be immediately understood to be a local restaurant serving Mexican — well, Southwestern — food. In its upstairs location on Walnut Street in Shadyside, it’s a successor to Cozumel, one of the first restaurants to interpret Mexican cuisine for a local audience. A couple decades ago, restaurants could serve ground-beef tacos, cheese-smothered enchiladas and canned refried beans to a clientele that had not yet been exposed to the delights of authentic Mexican street food, let alone more formal cooked entrees such as chicken pipian.

A lot has changed, including the upstairs dining room, which has traded sombrero-festooned plaster walls for lots of warm wood, the low light of Moravian star lanterns hanging from a pressed-tin ceiling and darkly festive Day of the Dead motifs. The menu focuses on familiar preparations such as tacos, burritos and fajitas, but with enough original flourishes such as candied pancetta, red-onion confit and tempura jalapeños to pique our interest. And speaking of jalapeños, we noticed that the kitchen did not shy away from heat.

We started off simple with the dip trio: queso, guacamole and our choice of salsa. Cactus offers five: roja, grilled pineapple, sweet and spicy chipotle, gringo and inferno, the last two being mild and spicy versions of a typical tomato salsa. We tried the roja, a smooth, nearly watery salsa made with fire-roasted tomatoes that offered a hint of smokiness, but the flavor was fleeting; perhaps the tomatoes needed more time to drain before blending. The guac was fresh and an appealing blend of creamy and chunky, but there just wasn’t much flavor there; Jason thought he detected some chili, but it may have just been seasoning on the pretty good housemade chips. The queso was the best of the bunch, made with amber beer for depth of flavor and sprinkled with a bit of pico de gallo for brightness and texture.

Tortilla soup was appealingly presented, with slices of avocado on one side, thin strips of fried flour tortilla on the other, a garnish of pico and a drizzle of sour cream. However, we were thrown off by the bisque-like viscosity of the soup itself. Like any chicken soup, tortilla soup is usually prepared with a clear broth, but this put us more in mind of Chinese hot-and-sour soup, and the chicken was a bit scant.

Tacos were served in triplicate, with a choice of flour, corn or hard-shell tortillas. The impressively broad protein choices included chorizo, tofu and vegan beef, and the sauce options were also many, none of them duplicating the dip salsas. Those overwhelmed by the choices can fall back on gringo style (lettuce and tomato), Mexican style (cilantro and onion) or Cactus style (spicy slaw and roasted corn salad). All come with queso fresco. On paper, at least, it’s more variety than one typically finds outside a good taqueria.

In practice, though, these tacos were unmistakably north of the border. The corn tortillas were authentically doubled up, but tasted pretty bland on their own, and they weren’t griddled, a key step to building both flavor and suppleness. These cold tortillas were then egregiously underfilled. In a “triple sampler” offering ground beef, grilled chicken and carnitas, the ground beef was OK (but no better than what you might make at home) and the carnitas a little mushy. Only the chicken was excellent, juicy and tender despite ample smoky char on the exterior.

Chicken enchiladas presented the same pairing of tasty chicken and tasteless tortilla under a weak salsa verde. However, the sides of rice and beans, justifiably ignored on most Mexican restaurant plates, were terrific here: Both components were firm but not dry, and were simply, suitably spiked with garlic and just a bit of broth.

A specialty taco of chipotle brisket mostly lived up to the tantalizing promise of smoked brisket with prickly-pear chipotle barbecue sauce, pomegranate seeds and tempura jalapeños. The filling was vividly flavorful, the textures exciting, and the sweet and heat well balanced. But the flawed tortilla situation recurred, and it was rather odd that the brisket resembled bacon bits more than shreds or thick slices of luscious meat.

Steel Cactus is neither authentic nor haute Mexican cuisine. It is unabashedly Mexican-American, a respectable genre in its own right, and informal in atmosphere without sacrificing innovation and ambition in its recipes. It’s an appealing formula with as-yet inconsistent results.