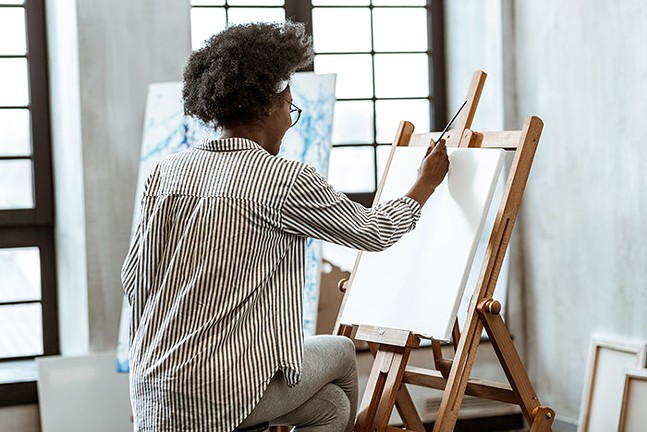 This is my third attempt at this column.

I started with an account of my time in India, when the coronavirus first broke in China and I wasn’t sure if I would make it back to the U.S. (I wonder if I should have just stayed in India, but that’s another column). Then I wrote a piece about social-distancing, but I realized I don’t really want to talk about that. I want to talk about being creative.

I make things. I spend more time making than I do anything else, other than sleeping. I sketch ideas, garments, and jewelry. If I am making a garment, my next step is to make a paper pattern of that design. There are several other steps that I won’t share here, but to make a long story short — artists are going to art, designers are going to design, makers are going to make. Even now. Especially now.

As a designer, I can spend hours, days, weeks often alone, creating. But at some point, I have to share what I make. I also hope to sell what I make because I’ve gotten used to this thing called “eating.” Other artists’ work depends on the sharing and presentation of their art. If a painting is never seen, does it exist? And what if a song is never sung?

In these times when events, exhibitions, performances, talks, concerts, and more are being postponed or canceled, what is a creative response to creative disruptions?

Five things made me think of this:

-a story from Hyperallergic about the L.A. Book Fair’s crowdsourced book list of would-be featured titles of the canceled event

-The live-tweeting of the Broadway sensation Hamilton via Twitter

-The much-anticipated SunStar Festival at Kelly Strayhorn Theater being postponed

- Finally, I was excited to be in conversation with Staycee Pearl at the Pittsburgh Humanities Festival about her Pittsburgh Ballet Theater residency and commissioned production Here and Now, both of which have been postponed.

In a city full of creative people, I cannot accept the idea that we all just stop and shut ourselves in our studios or hang up our pointe shoes. So what can we do to keep our natural drive and need to make alive, and, just as importantly, to provide art to our community?

A creative response to creative disruption:

Host artist talks of your work in-studio or in-gallery.

Stream performances for donations/subscriptions on a sliding scale.

Post a video on how to sew buttons or repurpose an old t-shirt.

Start that podcast you’ve been talking about.

Create a collage or mood board.

Create a project individually that you can continue later as a group project.