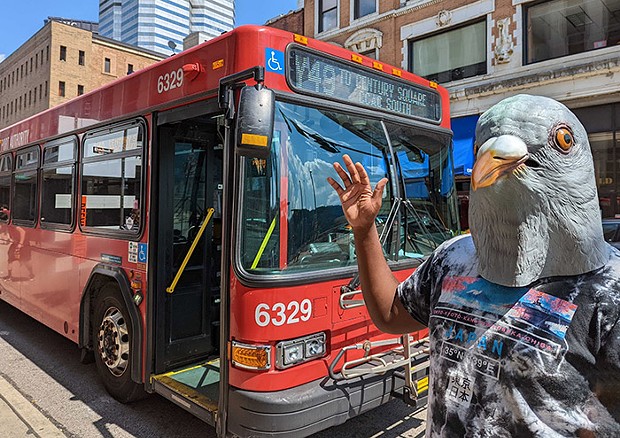 Hello, and welcome back to Stay Weird, Pittsburgh — a column providing you with Pittsburgh’s weirdest hits of the week. As your host Hannah, I’m especially excited for this week's dispatch. Why, you may ask?

Well, we have a bona fide UPDATE from last week. That’s right, folks: we got the Joker on the line.

In case you missed it in last week’s edition, we featured a r/Pittsburgh spotting of a man in full costume as the Joker at an intersection. Well, one of our faithful readers sent me the Joker’s information. His name is Michael Diaz, and I got a chance to ask him a few questions about his life as Western Pennsylvania’s preeminent Joker impersonator. (We talked over Facebook Messenger, so answers have been edited for clarity.) 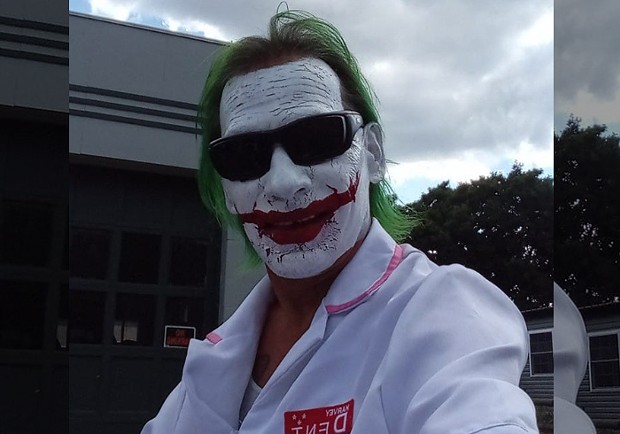 How'd you get started doing this? Why dress up as the Joker to do good deeds?
It started in 2017 when my nephew got me into car meets and took my Saturn and made it the Joker car. I saw how excited the kids got when they saw how cool it was, so I wondered if they liked the car so much, what would they think if I did it on the bike? First I got the helmet and everyone was saying “Cool helmet!,” so I painted the bike green and purple — not the design it is now — and everyone was like, “Cool bike!” I thought “what would they think if I dressed up?,” so I got the outfit and then everyone was waving and asking if they could get a picture. After that, I met up with some bikers doing charity rides for kids being bullied. When I saw how the kids loved seeing the Joker and wanted to get pictures, that's when I thought about doing the rides for the kids to make them happy and joyful.

In 2019, I started riding with other riders doing charity rides for autistic kids, special needs kids, and kids being bullied. I was asked to stop for pictures and to join other event rides; I did a special last ride for a kid named Seth at Children's Hospital and that event turned out to be huge. I started to get asked to do rides for kids’ birthdays and other events involving kids, so I began riding as the Joker to bring joy and happiness to both kids and adults. I've been doing it ever since. I've done some kind of charity ride every weekend this year, and on days that I don't have rides or an event ends early I ride up Mt. Washington so kids and adults can take pictures with the Joker.

Now I do rides with K-Dogz, PA Bikers for Justice, Red Knights, Blue Knights, and Zodiac.

Best movie Joker: Caesar Romero, Jack Nicholson, Heath Ledger, or Jared Leto?
I loved Heath Ledger’s Joker the best, but I have my own style of Joker. There’s a little mixture of Heath Ledger in there — I'll be asked to say things Joker did in the movie like “Why so serious?” or do his laugh.

What's the most unexpected interaction you've had while dressed as the Joker?
Other than charity rides, I have been asked to do special rides like birthdays and even did a wedding for a big fan of Joker and Harley Quinn. But the most unexpected interaction is when I did a charity ride, and one mother and father had a little girl that was a little scared of Joker and wanted to present a special picture to me. I was so honored.

Anything else you want people to know?
I'm available for any event that involves kids. I do birthday parties and will give the birthday kid an action figure and a ride on the bike if I’m allowed. I also do parades and fairs, but rates vary.

And now, time for one more weirdness:

PYTHON ON THE LOOSE | Duquesne Police say a 5 to 7 foot long python has been on the loose since Wednesday afternoon. Neighbors tell me they saw the owner and white snake along State Street here. Police say if you see snake, call 911 and do not approach. @WTAE pic.twitter.com/DrzKCWZtLh

UPDATE | This is the python on the loose in Duquesne—family members of the owner say the snake is only a few feet long (they provided photo) and it’s friendly, not aggressive. I’m told the snake’s name is Gene Simmons. Police say do not approach if you spot him, call 911. @WTAE pic.twitter.com/SmXVaV5aNN

Police chief says the owner was out walking the snake when it slithered away. @WTAE

I couldn't resist also including this — at the time of publication — ongoing development. Look at how many amazing details are in this story! How did a pet python end up being named Gene Simmons? (There's no resemblance in these photos.) Not only that, but how do you take a python for a walk? Do you use a leash? How fast did it slither away anyways?

We hope Gene Simmons finds his way home soon. Prayers up for a missing king.
Seen anything weird you think is deserving of inclusion in this very serious column that will no doubt land its author the Pulitzer someday? Send it to hkobre@pghcitypaper.com!