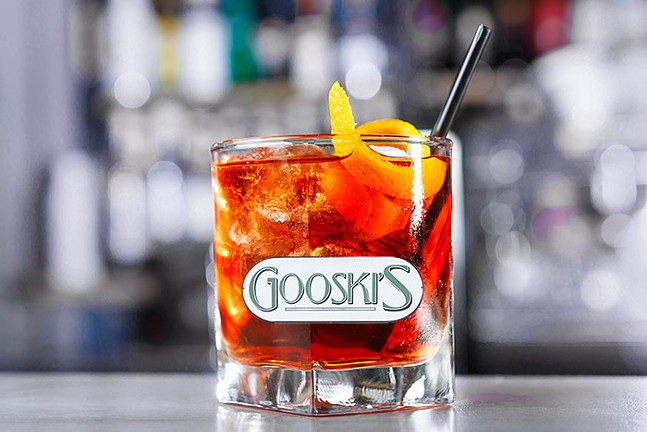 Photoshopped vision of a potential Gooski's Negroni Sbagliato
Hello everyone, and welcome back to Stay Weird, Pittsburgh: the only local column absolutely devoted to keeping track of all the things that make Pittsburgh the one-of-a-kind place it is. I'm your host, Hannah, and I'm here to guide you through the strangest hits of our town this week.

what do you think would happen if i tried to order a negroni sbagliato at gooskis?


The temperature is dropping, leaves are changing and dropping to the ground — all classic signs of fall. Or, I should say, these are signs that most people recognize as indicating the autumnal season is here. But it seems like, for some of you godless alt-weekly readers who only know one kind of mass (Hot), these seasonal changes have been interpreted as the start of an entirely different time of year: cuffing season.

That being said, if someone orders one at Gooski's and documents the aftermath: please send any photos/videos to us, and we will feature them in this column and send you a little reward for being so brave.

Reddit
Choose your own Pittsburgh Porta Potty experience.
Over the past week, r/Pittsburgh users have been documenting some of the most terrifying Porta Potties in the area — each with its own specific challenges. The final image on the right is one we happened to capture from our office windows as it drifted down the Mon.

This begs the question: which one would you choose to brave? And what does it say about you?

The Hillside Potty: You have fantasies of a pastoral lifestyle, but, for you, that just means moving to Highland Park. A word of advice: you don't actually need that $5 CBD seltzer they're selling at East End Food Co-op. Put it down!

The Scaffolding Potty: You might be insane? You like driving across the bridges here because it gives you a little thrill. You enjoy going to the South Side. You are one of the people who voted Primanti Bros. as having the best happy hour in the city. I don't understand you at all.

The Barge Potty: You dreamed about being a pirate as a kid, and now have settled for the occasional trip on the Gateway Clipper. You are constantly thinking about moving to Philly because "the music scene is so much better there," but, at the end of the day, you're too afraid of losing your "big fish in a small pond" status.

Craigslist
And last (but not least), the most romantic Craigslist Missed Connection I've ever seen. I hope someone writes something like this about me someday: "Couldn't take my eyes of [sic] it.. just stared away!"

We recommend that this man check out the following: Julia Ducournau's Titane, David Cronenberg's Crash (NOT the shitty 2004 Crash that's about racism in Los Angeles or whatever), and the episode of My Strange Addiction where that guy is having gay sex with his car.
Seen anything weird you think is deserving of inclusion in this very serious column that will no doubt land its author the Pulitzer someday? Send it to hkobre@pghcitypaper.com!