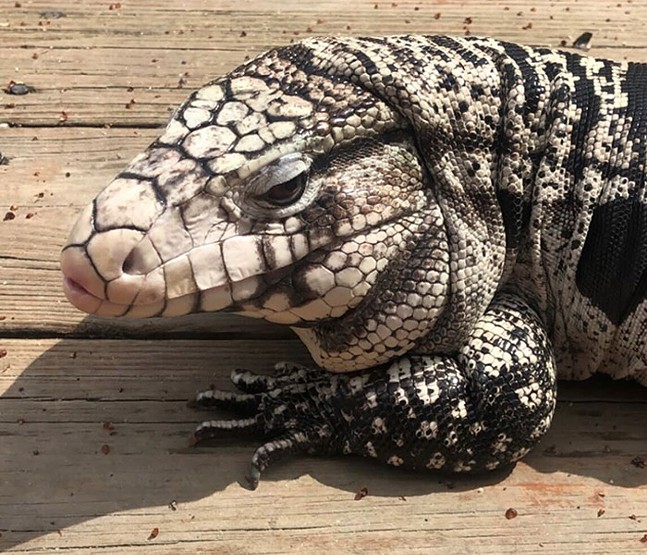 Hello, and welcome back to Stay Weird, Pittsburgh — a weekly column with the goal of taking stock of the strangest things to happen in the region this week. I'm your host, Hannah, and I gotta say that it seems like the temperature dropping is really bringing out the best of the city this week.


You never know who you'll see on your way to work... (This morning on Rte 28) pic.twitter.com/jFIm0ThI6X

Oh man, to witness the end of an era ... on Route 28 heading towards the North Shore ... history slinks away from us, fading into the rain and fog as it takes Exit 1B towards East Ohio Street ...

I'll let my boy Percy Bysshe Shelley act as the epitaph for the Heinz sign:


I met a traveller from an antique land,
Who said—“Two vast and trunkless legs of stone
Stand in the desert. . . . Near them, on the sand,
Half sunk a shattered visage lies, whose frown,
And wrinkled lip, and sneer of cold command,
Tell that its sculptor well those passions read
Which yet survive, stamped on these lifeless things,
The hand that mocked them, and the heart that fed;
And on the pedestal, these words appear:
My name is Ozymandias, King of Kings;
Look on my Works, ye Mighty, and despair!
Nothing beside remains. Round the decay
Of that colossal Wreck, boundless and bare
The lone and level sands stretch far away.”

After seeing this, we immediately needed to know everything about this lizard bravely putting his hands and feet on a table at Gooski's. Fortunately, I was able to find and speak to his owner, Justine Lechner, and ask her all the questions buzzing around my brain after seeing this video.

"I've always loved animals since I was a kid," Lechner tells me. "I helped rescue reptiles in high school but had to adopt out a lot of my collection when I went to college. I got Pepper at the Reptile Expo in Harmar in 2016."

Pepper is a Tegu, one of the larger pet lizards around. "Tegus are very inquisitive animals," Lechner says. "He uses his forked tongue to smell the environment around him and decide if whatever he is looking at is edible."

She adds that Pepper loves to burrow and hide. "I often find him at the bottom of a laundry basket or under a couch pillow. His favorite foods are chicken, blackberries, blueberries, papaya, hard-boiled eggs, mice, yams, and honeydew."

Lechner takes Pepper with her on many outings, especially on sunny days. "He likes to bask in the sun on warm days and draws a crowd wherever we go. I take him to the park or The Point to bask."

Of his stunning debut at Gooski's, Lechner explains "the night he was at Gooski's, we went to the Polish Hill Arts Fest together. He's also been to Pride and a bunch of outdoor punk shows."

If you see Pepper out and about, Lechner advises that "you can definitely come up and say hi if you see him at the park, but just know it's up to his mood if he wants to interact or not."

The official City Paper stance on Pepper? His life sounds awesome, and we would also like to be large lizards basking in the sun and attending outdoor punk shows in Pittsburgh while being fed blueberries. The dream!

This Pittsburgh man who fell face first into a thing of cement while walking a scooter, however, is the spiritual opposite of Pepper the lizard. More proof that we need to round up all those damn scooters and throw them into the nearest sinkhole if you ask me!

My advice to this man who, I presume, is now walking around telling chicks at bars he got tarred and feathered by the city of Pittsburgh: Try acetone, honey.

UPDATE: After initial publication, someone who says they're friends with this man, emailed City Paper to clarify that he was talking his scooter down a "shittily marked street under construction," and fell into the wet cement because it wasn't blocked off. He also said he's in a happy longterm relationship and not bragging to chicks. We stand by our acetone recommendation, though.


Seen anything weird you think is deserving of inclusion in this very serious column that will no doubt land its author the Pulitzer someday? Send it to hkobre@pghcitypaper.com!