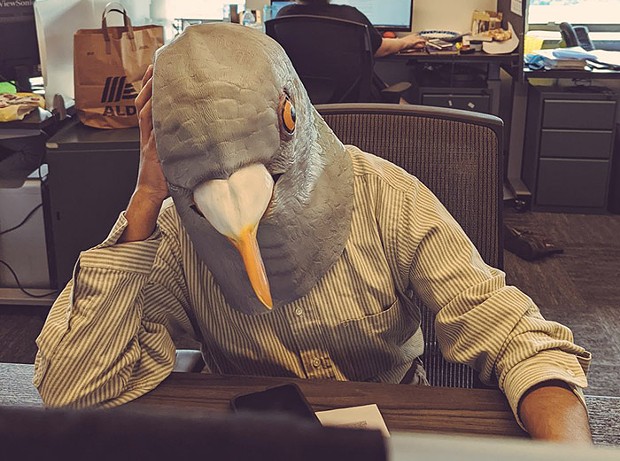 Pittsburgh City Paper's new mascot, Nellie Fly, thankful this week is over.
Hello and welcome to the first installment of a column we’ve decided to call “Stay Weird, Pittsburgh.”

Why not “Keep Pittsburgh Weird?” Well, for starters, that’s Austin’s thing, and we want no part of it. Secondly, Pittsburgh doesn’t need any help to be weird. It’s already a bizarre place, so we figured someone should celebrate it as it is: a city that, for better or for worse, is staying weird.

Without further ado, let’s dive into what Pittsburgh’s been up to this week:

Alright, maybe we want one of these for our office, but so what? We tip our hats to the genius who invented this toilet barbecue/cooler combo, an object that combines the Dadaist impulse of Duchamp’s Fountain with the utility of the multitool. Next!

Today, I heard and saw a rustling in my back yard. I thought it was the groundhog so I braced myself for his middle...

Clearly, this raccoon haunting Pittsburgh writer Brian Broome has not discovered the rabies vaccine treats the county has scattered around this month. (Ever since I started eating them, I’ve been perfectly sedate and productive. My coworkers can attest to this.)

Regardless of whether it’s rabid or not, we commend this raccoon’s outsider spirit. There’s nothing we respect more than a creature that eats garbage.

Beautiful, a natural wonder in the midst of our fair city! We say natural because, like all Pittsburgh geysers, it's the result of people and city officials actively refusing to interfere in structural issues resulting from natural processes. Nature is healing, yinz.

what if we kissed under the utz cheese balls pyramid? pic.twitter.com/9bd59GOBrx

And, best for last: this new piece of art that’s found its way to Downtown Pittsburgh as part of a Cultural Trust initiative. The piece — a 26-foot-high inflatable sculpture by French (no comment) artist Cyril Lancelin — is entitled, appropriately, “Pyramid XL Sphere.”

While this person on Twitter described it as the “Utz cheese balls pyramid,” we like to think of it as being an accurate, if slightly oversized, representation of what Garfield might leave behind in his litterbox after a large lasagna dinner. The Revenge of Garfield’s Nightmare, anyone?