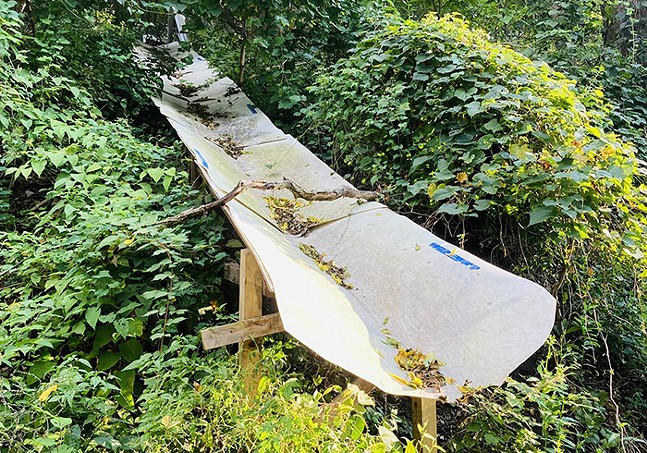 Twitter photo by @pghisbeautiful
What is this thing?? Keep reading.
Alright, everybody: after a week off, welcome back to Stay Weird, Pittsburgh — a column documenting all of the strange occurrences that make Pittsburgh the one-of-a-kind place it is!

I'm your host, Hannah, and fortunately for me (and you), the past two weeks have provided no shortage of uh, intriguing content. Let's start off with my favorite:

Correction: Biden referred to Fetterman as "that big ol' boy"

I was hoping when the news broke that Biden was coming to Pittsburgh, we would get a few "Corn Pop"-esque gems and boy, did he deliver! It's a description of John Fetterman that borders on lyricism but without sacrificing concision — one only our maybe slightly age-addled president could get away with using. John Fetterman should just run an ad with a clip of Biden saying "that big ol' boy" and then, like, a picture of him dabbing or something. He would win by 10 points!

This week marked the fourth anniversary of Pittsburgh-born rapper Mac Miller's death, and the first time I saw this genius annotation he did of his own song. I can't tell how ironic this was supposed to be, but regardless of the Patrick Bateman-y voice: Mr. Miller, I salute you for your commitment to the bit. God rest your soul.

What on earth is this in Morningside Heights?? A slide?? pic.twitter.com/1uyKkk0gcp

I wanna go down it so bad. I don't care if it's a slide or a gutter or whatever, it doesn't matter to me, just let me try it out!!! Let me have my Johnny Knoxville Jackass moment with the Morningside Heights slide!!! (Can one of you get a GoFundMe going for my inevitable medical expenses when I go down this and die?)

A text message from "Team Fetterman"
And, last but not least, an example of Stay Weird, Pittsburghery sent to me by my roommate Dana. (Shout out to Dana for being brave enough to give Fetterman's campaign her phone number, something I have avoided so as to not become insane!)

Listen, I get campaigns are tough. Dirty, even! And I am certainly no fan of Dr. Oz. At the same time, if you've started sending out mass texts that include screenshots of Jezebel headlines and threats of normalized cousin-fucking as a way to fundraise, it might be time to log off.