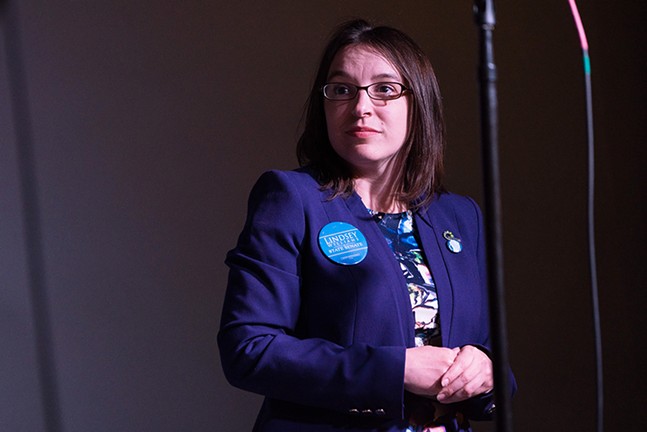 The bill, called PA Student HELP (Higher Education Lending Protection), aims to protect borrowers, reduce loan debt, and track progress in addressing the state’s debt crisis. According to a 2017 report from LendEdu, Pennsylvanians graduate with the highest average student debt per borrower of any state in the U.S.

The refinancing program would be funded by up to $1 billion in bond financing. State Sen. Vincent J. Hughes (D-Philadelphia), another sponsor of the plan, says the cost for taxpayers would be approximately $80 million annually, though he expects it to be reduced by students reclaiming buying power and economic stability.

Williams, Hughes, and state Sen. Katie Muth (D-Montgomery) expect PA Student HELP to save a student with an average amount of debt in Pennsylvania more than $10,000 over the span of a 20-year loan repayment. Students with higher-than-average amounts of debt who rely on private lending would save even more, as PA Student HELP proposes a 4 percent loan rate for private student lending compared to the current average of 10 percent.

Over 1.8 million Pennsylvanians hold an estimated collective amount of $68 billion in student debt, with the average graduate owing around $36,000. This financial burden can prevent graduates from investing in large or long-term financial purchases, such as homes or cars.

“Students face tough choices and are willing to go into debt to pursue education opportunities,” says Williams in a press release. “However, the high cost of borrowing and inability to refinance student loan debt creates a ripple effect in the economy. I know that when your student loan payment is twice as much as your rent, you struggle with small purchases and cannot even attempt to purchase a home.”

In addition to the refinancing program, the proposal establishes a student loan tax credit, where individuals with student loan debt could seek up to a $500 per year tax credit against their taxes. Employers would be encouraged to make direct contributions into a 529 account for employees with student debt, and apply payments or the cash equivalent of unused carryover days toward an employee’s debt as well.

The program would also require higher education institutions to present the cost of four years of study upfront and compile and submit student loan information to the state Department of Education. The plan would also establish a student loan ombudsman to guide students, parents and guardians through the loan process.

Pennsylvania is not the only state undertaking this sort of refinancing plan. Minnesota and Connecticut both launched their own state student loan refinancing programs in 2016. According to the senators proposing the PA Student HELP Act, their proposal is based off of Connecticut's program.