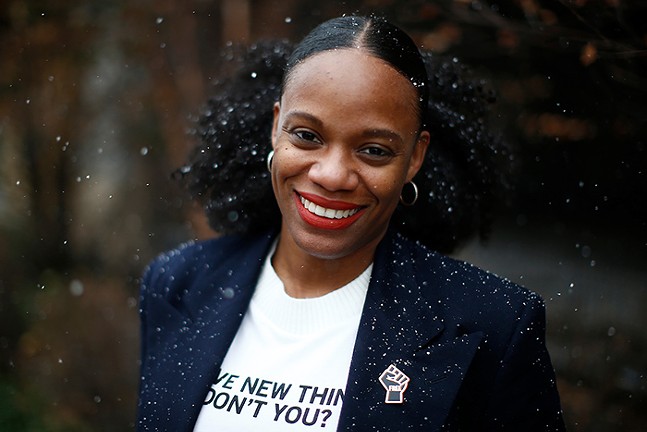 ​​“I’m running for Congress because our community deserves to have leadership that tackles our crises with the urgency of someone who has lived through the struggles of environmental racism, unaffordable healthcare, crushing student debt, and job insecurity,” said Lee in a statement sent to Pittsburgh City Paper.

Doyle, who has served the city of Pittsburgh and its surrounding areas in Congress for more than 25 years, announced on Mon., Oct. 18 that it was time to “pass the torch to the next generation.” Lee filed a statement of candidacy for the seat hours before Doyle announced his retirement, but didn’t formally launch her campaign until Oct. 19.

In 2018, Lee became the first Black woman from Southwestern Pennsylvania to be elected to state legislature. Since then, she started UNITE PAC, a political-action group supporting other progressive candidates, particularly women, LGBTQ candidates, and candidates of color. Lee won re-election in 2020, beating her challenger with about 75% of the votes.

In her announcement, Lee, who was born and raised in North Braddock, says she’s running to bring an end to a reliance on fossil fuels, to bring union jobs back to Allegheny County, and to fix the criminal legal system.

“For too long, communities like mine have suffered and been left behind while corporations that poison our air and destroy our planet have only gotten wealthier,” said Lee in the statement. “I am ready to show our community that a Green New Deal, Medicare for All, and a strong union movement is not going to be delivered by just one person, but by building a movement that brings everyone to the table — I’m ready to build that movement.”

Lee joins what is likely to become a competitive Democratic Primary field in the race, including University of Pittsburgh law professor Jerry Dickinson, who announced his run several months ago and who has already raised over $330,000, according to a statement sent to City Paper.

So far, Lee's campaign has gained the endorsement of national progressive organization Justice Democrats. "This is a campaign about jobs, justice, and uplifting the working people of the greater Pittsburgh region," said Justice Democrats executive director Alexandra Rojas in the press release.