"They're using the state police to try to silence us."

Four years ago, the Pennsylvania Office of Homeland Security was embarrassed by revelations that it had hired a private security company to monitor citizens, including anti-fracking activists. The fact that the intelligence-gathering program had been approved by OHS — apparently without the knowledge of then-Gov. Ed Rendell — was chalked up to a lack of oversight.

In the aftermath, James Powers, head of the OHS, resigned. During a day-long hearing into the program, local and state police presented themselves as defenders of the Constitution and criticized the OHS's actions, which they said yielded little valuable intelligence. (One officer compared the intelligence bulletins to reading the National Enquirer). "This is one of the problems you have when you contract intelligence work to amateurs," the state police commissioner testified.

Police also made the case that tracking criminal activity, without trampling on First Amendment rights, was the job of the state police.

But it is now the state police who are collaborating with the oil and gas industry, and continuing to keep a close eye on anti-fracking groups and activists, largely through the efforts of the Marcellus Shale Oilfield Crime Committee.

MSOCC was initiated by Anadarko Petroleum's James Hansel, a former state trooper, to bring together industry representatives, law enforcement and prosecutors to develop a "network of intelligence sharing."

In a January 2012 email to group members, Hansel said MSOCC was seeking the participation of "law-enforcement officers assigned a position relating to intelligence and prosecutors at the county, state and federal level." Today, the group sends intelligence updates to more than 150 recipients, including all of the major drilling companies in the Marcellus Shale, representatives of the FBI, state Homeland Security, and state and local law enforcement.

In a separate email introducing himself to Hansel in February 2013, Jackson, the state-police analyst who received the Philly protest intelligence from Global Security Corp., wrote, "Please let me know if I can be of any assistance and any Marcellus Shale items you send me would be much appreciated." 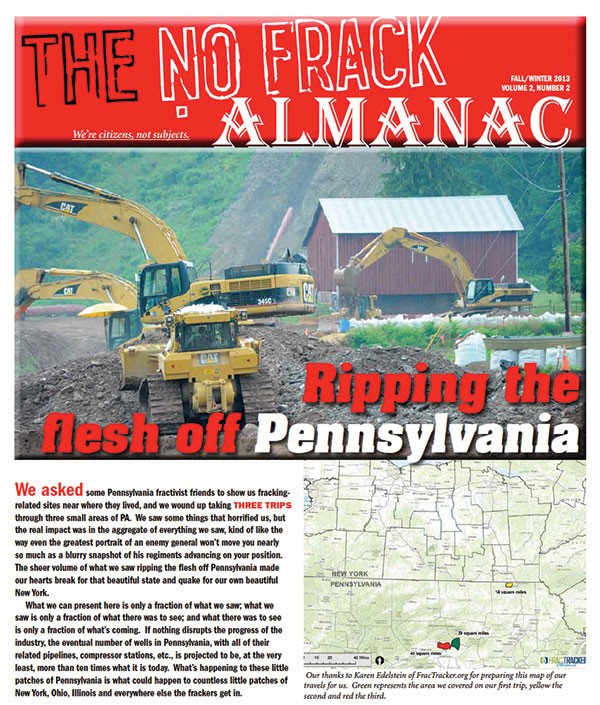 Court documents show Hansel once worked with state police trooper Hutson, who made the home visits to anti-fracking activists. Hutson has been tracking crime in the Marcellus Shale, and is an active member of the MSOCC network.

On Feb. 14 of this year, Hutson showed up at Professor Lee's home in Bloomsburg to ask about photos she took of property owned by PVR Partners (now Regency Energy Partners), which operates the Barto compressor station in Lycoming County. Lee writes frequently and often indignantly on the subject of fracking and has posted thousands of photos of wells, drilling rigs and compressor stations to her Flickr photo-sharing page. Lee responded that she had visited the site in question and taken photos, but that she had not trespassed. In fact, the Barto compressor station was one stop on a walking tour she had done numerous times to teach students about the impacts of shale-gas development.

On the day these photos were taken, she was accompanied by Alderson, the New York-based activist who had published his daughter's images of the same compressor station in his No Frack Almanac.

Lee believes the real reason for Hutson's visit was not to investigate a potential crime but to intimidate her, and to fish for information on fellow activists and environmental groups in the region. As she wrote on her blog later that day, "He wanted to know about the activists in the anti-fracking movement — and whether or not ‘they' commit acts of vandalism and/or violence. He wanted me to give him names of ‘bad apples.'"

Indeed, it is a subject that Hutson has explored before. In July 2013, he gave a presentation before the industry-led occupational-safety group Steps of PA.

The PowerPoint presentation, which was leaked to the press, starts off with a discussion of domestic terrorism and so-called environmental extremism before moving to an overview of anti-fracking groups active in the Marcellus Shale. The final third of the presentation was devoted to a discussion of several acts of vandalism that have taken place on or near drilling sites — none of which, to be clear, have been linked to environmental organizations.

The incidents included "suspicious charred debris" found near two well pads; two improvised explosive devices (IEDs) discovered on an access road leading to a storage well in Erie County in February 2013; a shooting at a Shell well pad involving a "white Ford pickup"; and a pipe bomb found near a well pad in Elk County.

In an October 2013 article about the incidents, posted on the Harrisburg Patriot-News' website, PennLive.com, Hutson conceded that, "We don't know the intent" of those involved, and even said that none of the acts of vandalism appeared to be the work of environmental activists.

The organizations mentioned in Hutson's presentation range from the mainstream Power Shift to more militant groups like Marcellus Earth First!, Shadbush Environmental Justice Collective and Appalachia Resist! The Shadbush Collective, based in Southwestern Pennsylvania, combines outreach and education with direct-action campaigns. Hutson's presentation included two photos of the group staging a protest at a well site near an organic pig farm in Lawrence County owned by Maggie Henry. In one photo, Henry wears a sign around her neck reading, "Protect Farms for Our Future." Protesters locked themselves to a giant papier-mâché pig, blocking access to a well site in an effort to draw attention to the potential impact of shale-gas development on Pennsylvania's largest industry, agriculture.

Shadbush Collective organizer Patrick Young says Hutson's presentation was a "pretty classic attempt to criminalize dissent" by failing to distinguish between different kinds of activism. "What Hutson is doing is irresponsible because it creates the perception among law enforcement, industry and the general public that engaging in public protest is somehow nefarious," he said. "When you criminalize dissent it's an incredible tool for shutting up your enemies."

Hutson does not conduct interviews with the media, according to Finn, the Pennsylvania State Police spokesperson. But she insisted that Hutson's presentation made "no connection" between "the groups mentioned and the IED incidents, nor was it presented in that manner."

Finn said Hutson simply was responding to questions about activist groups in Pennsylvania and in the Marcellus Region.

Based on the slides, which include provocative language about environmental terrorism followed by grainy images of protesters with bandanas covering their faces, it is hard to believe that some sort of connection, tacit or otherwise, was not being made between eco-terrorism, the acts of vandalism and peaceful anti-fracking activists in the Marcellus Shale.

Hutson ended his presentation by making the case that information-sharing was a key part of any investigation, and said that documents and information are being shared between state police, MSOCC and the FBI's Oil and Natural Gas Crime Issues Special Interest Group (USONG). According to a 2012 FBI report, USONG "allows for secured communications between the oil and natural gas sector and law enforcement at all levels."

A month after the Steps of PA presentation, Hutson appeared with Anadarko Petroleum's Hansel at a Marcellus Oil and Gas Security Workshop sponsored by the American Petroleum Institute. The title of their talk was "Combating Crimes Affecting Energy Exploration and Production." A public-records request for the presentation was denied on the grounds that it is the exclusive property of Anadarko Petroleum. Hansel signed an affidavit stating that he had drafted and presented the material himself "with a representative of the Pennsylvania State Police providing comment on specific issues. ... The PowerPoint presentation is exclusively my work product and belongs to Anadarko."

In an emailed statement responding to questions about the presentation, an Anadarko spokesperson wrote: "It is our company's policy that we do not discuss security measures."

Even as corporations and law enforcement become less transparent—declining to discuss security measures and withholding documents because they are deemed private property — the flow of information through formal and informal networks in the energy sector has expanded greatly. The revolving door between law enforcement, the oil and gas industry, and private security firms helps keep the information moving. And organizations like MSOCC provide ways for industry and law enforcement to deepen their connections.

Witold Walczak, legal director of the American Civil Liberties Union of Pennsylvania, says the documents obtained by City Paper raise troubling questions about police conduct and civil liberties. If police are indeed using information obtained from private security firms like the Global Security Corp., he says, it "poses a threat to basic freedoms and raises questions about why they're devoting limited resources to tracking activists." He says the legality of such information-sharing is unclear, and notes that police often receive intelligence from a variety of sources, including informants and the private sector.

Regarding the photo of the protester at the Shale Insight conference in Philadelphia, Walczak said more information is necessary. In particular, what was the basis for the surveillance? And how is the information being used?

At least one thing is certain: The "intelligence-sharing network" created by MSOCC and facilitated by the nation's most powerful law-enforcement agencies is still in its early days. This has activists, including Wendy Lee, worried.

"They're really trying to go after us," she says. "And they're using the state police to try to silence us. We are an obstacle to the endless profits of this industry and that's really what this is about."

Editor's Note: This article was published jointly by Pittsburgh City Paper and Philadelphia City Paper. Adam Federman is a contributing editor for Earth Island Journal and the recipient of a Polk Grant for investigative reporting. You can find more of his work at www.adamfederman.com.