Starship Mantis celebrates Trapped in the 9th Dimension at Spirit, Sat., May 19 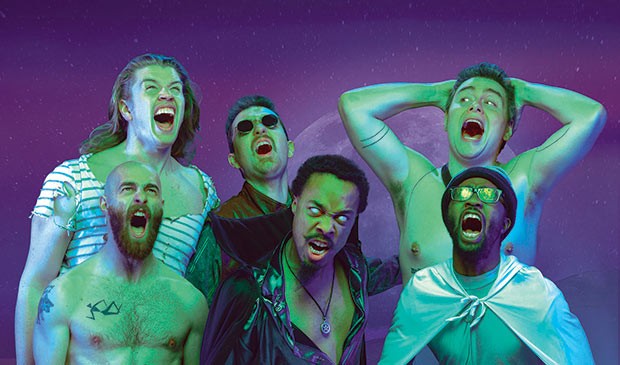 Imagine finding your human form suddenly transformed into that of an alien and being trapped in the ninth dimension, all while heartsick and hungry for some sense of affection and normalcy. That’s precisely where debut album Trapped in the 9th Dimension finds the members of Starship Mantis, entwined in a sonic drama.

The album is full of romance (“Diamond Girl”), groovy energy (“27 Years”), calls for equality and unity (“Drop Your Color”) and danceable tunes with incredibly technical roots (“Space Citizen”). It’s a voyage through time and space on a wacky spaceship piloted by some of the most colorful characters you’ve met.

Starship Mantis is a pop-soaked funk band with jazz-fusion elements that induce hip shaking and feet moving. The sextet wears fun, outlandish costumes and radiates an energy of excitement and carefree pleasure.

The band has only been together for about a year and a half, but in that time, it has created 19 songs, a dozen of which found their way on to the forthcoming record. They craft the kind of music that musicians can nerd out over and casual fans can shake their booties to. After all, Starship Mantis is a firm believer that “your brain is in your butt.”

“We try to incorporate pop aspects into it because of the whole idea that your brain is in your butt,” explains band member Beni Rossman. “We try to incorporate the idea that music can be enjoyable to musicians who are listening for cool little things, but it’s also for people who just want to dance. The pop aspect and easy listening elements paired with the more mathematical music helps make it accessible.”

The band is Rossman (bass), Langston Kelly (vocals/saxophone/flute), Julz Powell (drums), Spencer Geer (guitar), Chris Potter (keys) and Ross Antonich (percussion). Rossman and Geer have been performing music together since they were 19, and the two had previously played with Kelly in a house band. After one particular instance of a night of improvised funk and pop music together, Rossman went home and wrote down a bunch of bass licks. When he was done, he called up Kelly.

“I told him, ‘I want to start this band, come over to my house,’” says Rossman. “We wrote these tunes and then everyone else came over the next day to work on them.”

Two of the songs from the initial jam session can be found on Trapped: “27 Years” and “Space Citizen (Cosmic Man).”

With Trapped, the band made an effort to take the songs it had written and form them into a cohesive storyline once all the parts had been assembled, essentially working backwards.

“The very last song is actually part of the first song, so by the end of the record we get stuck in the ninth dimension and it cycles right back to the beginning again,” explains Rossman. “It was a whole process putting it together. We spent a lot of time figuring out the order.”

“We had the songs first, so we would then figure out what fits and made the storyline after the songs were together,” adds Geer. “Some of them fit together perfectly!”

According to the band members, none of the tracks are supposed to be standalones — rather the album is a unit. With the storyline, cyclical music style and its noisy, atmospheric transitions between songs, Trapped really is an album that deserves a full listen through — maybe even several. It contains all sorts of audio Easter eggs in the form of riffs, sampled sounds and beyond, little details that the band spent a great deal of time putting into place, little references to other tracks on the album and audio samples from the band’s travels. The band hopes that the mystique and details will lead people to do some fun dissecting in addition to the inevitable booty shaking.

“To give the album its full credit is to listen to it front to back and let it cycle through,” says Rossman. “It’s kind of like Arrested Development in that you’ll notice a bunch of stuff in the third or fourth time of listening that you didn’t notice before.”

“And the storyline itself is a little ambiguous, we left it up a little to see what people can form in their mind. I think if people open their minds, the album can lead them to some pretty cool conclusions,” adds Rossman.

One conclusion is clear: Starship Mantis has as bright a future as the stars its spaceship is zipping past on Trapped in the 9th Dimension.

BACHBOOMBOX narrows the gap between hip hop and classical music