Stark racial disparities exist for teens tried as adults in Allegheny County. Can anything be done to change it? | News | Pittsburgh | Pittsburgh City Paper

In Allegheny County, Black teens are 20 times more likely to be charged as adults compared to white teens. 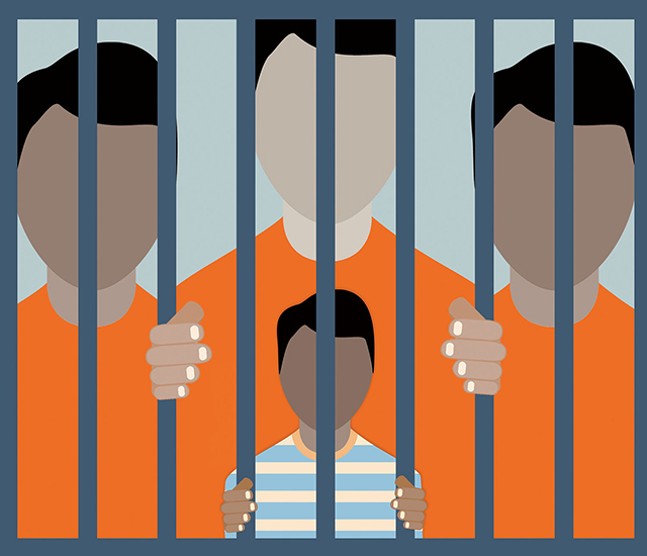 In Allegheny County, Black teens are 20 times more likely to be charged as adults compared to white teens.

Thanks to the passage of Act 33 in 1995, certain serious offenses committed in Pennsylvania by minors age 15 or older are automatically tried as adults. If a teen 15 or older uses a weapon in conjunction with crimes like robbery, aggravated assault, or homicide, those charges are sent to adult court, where the minor can be convicted and sent to adult prison. Minors of all ages can be tried as adults, but that’s under the discretion of prosecutors and the courts.

And in Allegheny County, Black teens account for the most cases where minors were tried as adults.

Joshua Vaughn, a criminal justice reporter from Cumberland County, analyzed nearly 200 cases where minors were tried as adults in Allegheny County between 2016 and 2017. Vaughn says these youths charged ranged from 14-17 years old.

He published his results in a November article in The Appeal, a news site dedicated to reporting on criminal justice. According to Vaughn’s analysis, Black youth make up about 80 percent of these cases, but Black youth only account for about 20 percent of Allegheny County’s 14-17 year old population.

According to a 2018 report from the National Association of Social Workers, Black youth nationwide made up 47 percent of cases where teens are transferred to adult court, despite only making up 14 percent of the youth population.

In addition to the stark discrepancy between white and Black teens arrested and charged as adults, Black teens face ever-escalating battles in Allegheny County’s adult courts.

“Black teens in the county accounted for about 85 percent of children charged in adult court, 91 percent of those referred for prosecution, nearly 97 percent of those who received an adjudication, and 100 percent of all children sentenced to either jail or prison,” wrote Vaughn.

Nyssa Taylor of the American Civil Liberties Union of Pennsylvania is dismayed to learn about these statistics.

“That is horrible. That is where the real disparity is,” says Taylor of the high percentages of teens adjudicated when charged as adults. “The fact the percentages went up in each step of the process [is] perpetuating and exacerbating that initial process.”

Advocates like Taylor are calling on Allegheny County District Attorney Stephen Zappala to tackle these disparities head on. The ACLU-PA recently launched a campaign to educate Pennsylvanians on the “vast powers [district attorneys] wield at virtually every turn in the criminal justice system.” Taylor believes Zappala and police departments in Allegheny County could make significant progress in tackling this racial disparity.

Zappala believes the statistics are slightly skewed. He says youth within the Pittsburgh account for large numbers of the Act 33 charges and the city has a higher percentage of Black youths than Allegheny County as a whole.

According to 2017 census figures, 39 percent of teens ages 15-17 in Pittsburgh are Black, compared to 17.5 percent in Allegheny County. That’s about twice as many Black youths, but nowhere near the disparity documented by Vaughn.

Regardless, Zappala defends many of his office’s Act 33 cases, since they are designed to include serious and violent charges.

“I think it is the process we have in place, to put the burden on the prosecution,” says Zappala. “You are talking about serious stuff.”

But cases aren't always as clear cut as they might seem. Take Kiyon Swindle of McKeesport, who was charged as an adult and plead guilty to aggravated assault and other charges in 2017, three months shy of his 18th birthday.

Swindle, who is Black, was caught driving a stolen car and then crashed while attempting to elude police. According to the Pittsburgh Post-Gazette, the crash resulted in injuries to two bystanders and medical attention to all three people in the car.

Zappala says the stolen car in that case was considered a deadly weapon, which under Act 33, means Swindle was automatically charged as an adult.

However, the P-G reported in 2017 that Zappala was also considering charging the officers pursuing Swindle under the county’s policy to curb unnecessary police chases. This could have put some of the blame on the officers, and not all squarely on Swindle.

It appears those officer charges never materialized, but Swindle was still sentenced to 1-3 years in adult prison.

Taylor says the policy means Zappala currently has the ability to combat this racial disparity for Act 33 cases by being more lenient with Black teens that fall under Act 33 guidelines.

“The district attorney does have discretion,” says Taylor. “There is room to work if you want to.”

This year, Zappala says his office transferred 24 cases from adult court to juvenile court. Those make up a small percentage of the 2,800 juvenile cases this year, according to Zappala.

Zappala also says defendants’ lawyers can petition judges to transfer teen-to-adult cases into the juvenile court. “The defendant can challenge, and ask that the matter be decertified, but they have to serve the public interest,” says Zappala.

“The district attorney does have discretion. There is room to work if you want to.”

Zappala bristles at the idea that Allegheny County public defenders are overburdened and believes they can handle the workload necessary to petition Act 33 cases down to juvenile court.

“There is a big support system: the taxpayers,” says Zappala. “Public defenders are not overworked.”

In June, Joe Otte resigned from his Allegheny County public defender position. He told WESA he and other public defenders were handling up to 80 cases at a time, and that he felt there were “deficiencies in [his] representation” because of the workload.

When asked about the racial disparities of teen cases, spokesperson for Allegheny County Executive Rich Fitzgerald directed CP to Fitzgerald’s previous comments when, in October, the county was awarded $2 million from foundations to reduce over-incarceration in the county.

Fitzgerald said his office has focused on reducing over-incarceration and racial disparities in the justice system. But he deferred to the county’s law enforcement officials in regard to the questions about how to combat the Act 33 disparities.

When informed about the Act 33 statistics, Allegheny County Councilor Anita Prizio (D-O’Hara) said she and county councilor DeWitt Walton (D-Hill District) were interested in discussing this topic further to see if legislation could be introduced to combat the disparity. But ultimately, she said some responsibility lies with Zappala.

“The district attorney should guard against the practice of overcharging,” said Prizio. “Particularly when it comes to Black teens.”