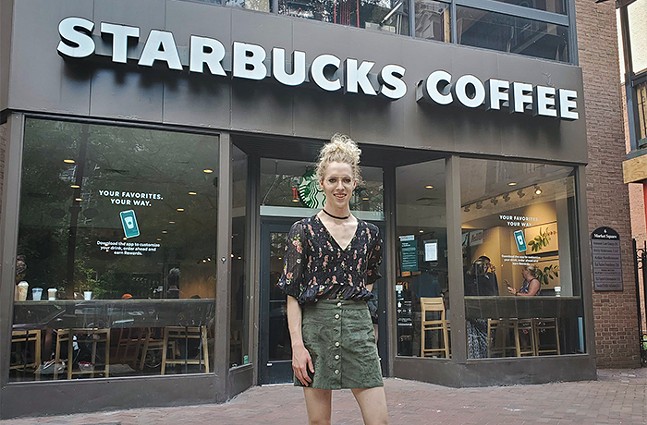 When Starbucks employee Tori Tambellini got ready for this year's Pittsburgh Pride parade, it was about more than expressing an identity. They came to fight the power.

“At my store, we feel like our safety isn’t really taken into account. We have people that harass us. We’ve gotten threats of violence,” says Tambellini, who works at the Market Square location. “So we felt like it was important to come out with our fellow organizers to show that we won’t stand for that, and Starbucks needs to take our safety concerns more seriously.”

Tambellini is part of a growing workers rights movement spreading through coffee shops across the country, including seven locations so far here in Pittsburgh. Some workers say they're petitioning for better pay, more regular hours, health care benefits, and safety protections. And an increasing number of LGBTQ employees say they see themselves at the center of that campaign.

Starbucks Corporate has historically advertised itself as an inclusive workplace with benefits like gender-affirming health care, including hormone therapy, surgery, and fertility treatment. But employees say those benefits aren’t always attainable, because they can’t control whether they’re consistently scheduled for the required 20 working hours per week.

Concerns like those have prompted a wave of union filings nationwide, from zero at the close of 2021 to 164 so far this year. The National Labor Relations Board shows 12 filings in Pittsburgh; organizers say others are still in the planning stages. Daisy Pitkin, a Pittsburgher and national field director for Workers United, estimates there could be 500 intent-to-unionize letters filed in the U.S. by Labor Day.

“It’s one of the fastest growing movements in recent labor history,” Pitkin says. “And as an organizer, I just feel really honored to get to see this in my lifetime and get to support this really worker-driven campaign.”

Starbucks Workers United, the national arm for employees, has filed over 200 unfair labor practice charges against the coffee giant through the NLRB for all sorts of retaliation efforts, including cutting hours, which effectively bars access to life-saving, gender-affirming care.

Pitkin says it's become an incentive for company managers to entice LGBTQ people to work for them, then threaten to cut benefits if those same workers express interest in unionizing.

"'If you speak up, we'll take away your benefit.' That's the way the threat is being interpreted," Pitkin says. "And in these one-on-one conversations that managers have with workers, they hone in on (any specific) benefit that they know that particular person really counts on or needs, and they threaten to take it away."

A Starbucks spokesperson who asked not to be identified says the company isn’t threatening to take away benefits and that “it's difficult to predict the outcome of negotiations, and each store's negotiation may look different. We do want to prepare partners for the possibility of the benefits being changed through the process of collective bargaining.”

Cayla Enis, who works with Tambellini in Market Square, identifies as trans. She’s still covered under her parents' insurance until she turns 26 next year, but she’s worried that, under Starbucks’ current coverage, she won’t be able to reach her goals as she transitions.

“It kind of feels like a carrot on a stick that's held in front of me,” Enis says. “It’s like, ‘You can get this care that helps you live the way that you want,’ but also ‘We're not gonna really meet conditions that are sustainable for you.’”

Another Pittsburgh-area Starbucks employee shared her experience anonymously with Bloomberg, saying two managers met with her privately to suggest a future contract negotiation might eliminate her access to gender-affirming care altogether.

Locally, Pitkin says hours have been cut drastically as retaliation for organizing, which makes it even more challenging for employees to maintain a predictable income. 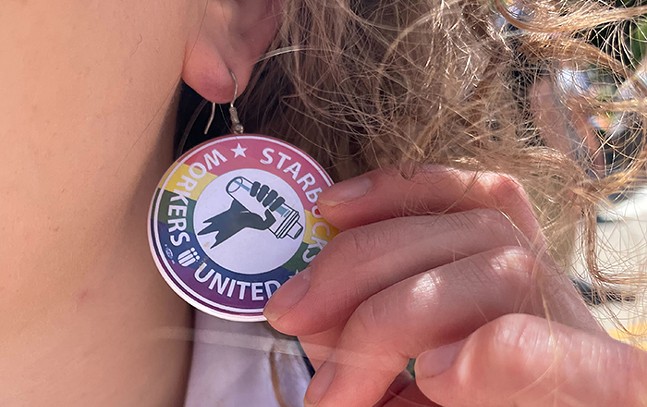 Starbucks is selling an atmosphere, Pitkin says – an experience, or “third place” that isn’t home or work for people to feel comfortable and safe. Which to her, means they’re also selling people and their identities.

“So when you go into Starbucks and you order a cup of coffee, coffee is not the only thing on the menu. They're selling an interaction with a certain group of people that they have created to match the sort of aesthetic character of the company.”

That resonates with Brett Taborelli, who started working at Starbucks eight years ago because he saw it as his safe space. His location, Penn Center East, just voted to unionize last week.

“I think Starbucks should have recognized the demographic that they sell … the type of people who are usually a minority that have been affected by major political issues or major people just like standing above us,” Taborelli says. “And we won’t back down.”

Tambellini, who held her rainbow union campaign sign next to Taborelli’s at Pride, agrees.

“We’ve spent our entire lives fighting to be recognized, and unionizing is no different,” she says. “It’s kind of something we’ve always done.”

Starbucks Union Workers: Pittsburgh's People of the Year 2022 in Labor