Justin Lin’s film is all action, and somewhat less than even routine 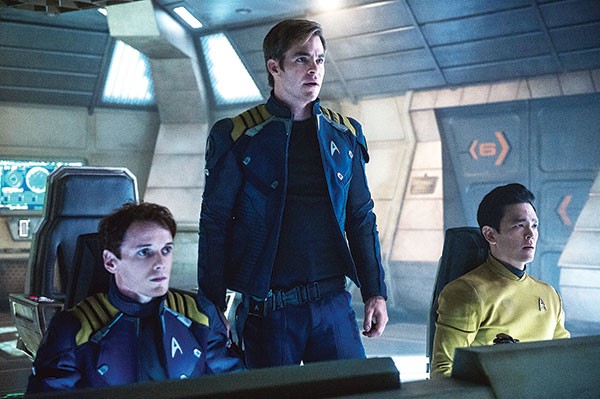 Will anything with the name “Star Trek” ever again boldly go anywhere that it hasn’t gone before? Probably not. So calling the new movie Star Trek Beyond is a bit of a tease. In fact, this third entry of the second Star Trek universe (commonly known as the “reboot”) is somewhat less than even routine: It’s all action, and you have to cup your hands to your ears to hear what little it has to say.

The story revolves around a rescue mission that unwittingly puts the Enterprise into the clutches of Krall (a fierce Idris Elba), a sort of malevolent Klaatu and former soldier who can’t accept the new normal of peace. Uhura (Zoe Saldana) calls his assault an act of war, but he sees struggle as character-building, and unity as imperialism, so he retorts: “The Federation is an act of war.” As directed by Justin Lin, the adventure that unfolds is as much Star Wars as Trek, and Krall is a coarser-looking hyper-Klingon with a Borg-like army.

This new Star Trek line seems to want to have it both ways. Most of the seven Enterprisers resemble their ’60s counterparts, except when they don’t (Uhura, at last, has some agency). Yet the central philosophy is decidedly reboot: Kirk is bored with exploring space, and he asks, “If the universe is endless, what are we chasing?” The answer, of course, is strange new worlds — that is, pure knowledge. But neither he nor the movie seems to care about that, a twist that violates the very premise of the franchise.

The actors are fine overall: Chris Pine is a sturdy Kirk, Karl Urban a surly Bones, Simon Pegg (who co-wrote the screenplay) a ne plus ultra Scotty, and Zachary Quinto has been, and always shall be, a mechanical Spock. This is the last time we’ll see the charming Anton Yelchin as Chekov, and he has a little more to do than usual, a barely fitting finale. Beyond also deals with the death of Ambassador Spock (Leonard Nimoy), who transported to the past, and met his younger self, two films ago.

And get this: Sulu (John Cho) is gay, with a husband and a child. That’s a step forward in the notoriously homophobic Star Trek universe, and a nod to George Takei, the now-out actor who played the original (and straight) Sulu. Word is they edited out a kiss between Sulu and his husband, a simple thing that we see on TV nowadays, but that still seems to be this enterprise’s final frontier.