"This young man should not be dead."

By Lauren Daley-Maurer and Chris Young 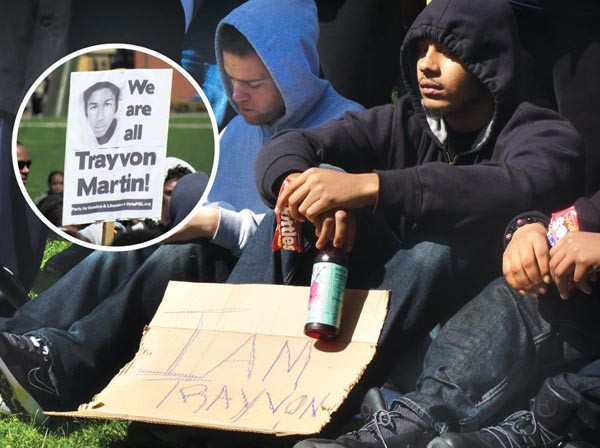 When it was time for her teen-age son to get a driver's license, Toi Chambers made sure he wore a suit for the photograph.

"If you're pulled over and asked for ID, and they see someone in a T-shirt and hat, the first assumption is, 'You're a thug, you're a gangster,'" said Chambers, of McKeesport. "If you see someone in a suit, the opinion automatically changes."

And while they taught their 16-year-old the rules of the road that came with his license, Chambers and her husband also taught him what she calls "the rules of the law": Do as police officers tell you. Answer politely. Keep your hands on the steering wheel.

It was to protect him against something she said is inevitable: that as a young black man, he will be stopped or encounter law enforcement one day.

"It doesn't happen all the time to everybody, but just one time is enough," said Chambers, recalling when her husband was once stopped while they drove home from work. "We had to make sure he understands the lay of the land ... because he's a young black man. He needs to know how to survive."

It is also why Chambers and her friend, Angelica Lightner, of Greenfield, joined nearly 300 other protesters at Carnegie Mellon University, on March 26, demanding "Justice for Trayvon Martin." Martin was a Florida teen, walking home carrying Skittles and an iced tea, when he was fatally shot by armed neighborhood-watch volunteer George Zimmerman. Zimmerman has not been charged.

The case has sparked a nationwide outcry and efforts to bring charges against Zimmerman, who is white and Hispanic. And while the case is playing out hundreds of miles away, near Orlando, some of those who gathered at the March 26 event said it strikes close to home.

"I pray for my 17-year-old grandson every day," said Walt Evans, of Beltzhoover. "It's always going to be like this. We've been going through this for years. It's just a part of life. It's a shame you've got to teach your kids this."

Although Zimmerman was not a police officer, the Martin case also prompted comparisons to the local cases of Jordan Miles and Jonny Gammage, raising concerns about racial prejudice and inequality.

"I think the case is a potential teachable moment for the country," said Tim Stevens, chair of the Black Political Empowerment Project (B-PEP). "This young man should not be dead."

Skittles, iced tea and hooded sweatshirts have become symbols of Trayvon Martin's death. Displayed prominently during the rally at CMU, they helped tell the story of how the 17-year-old boy's life ended.

On Feb. 26, Martin was watching the NBA All-Star game inside his father's Sanford, Fla., townhome. At halftime, he left to buy Skittles and iced tea at a nearby convenience store.

On his way back, Martin caught the attention of George Zimmerman, a neighborhood-watch captain patrolling the gated Sanford community where Martin's father lived. According to 911 recordings, Zimmerman reported spotting a "real suspicious guy" wearing a dark hoodie.

"This guy looks like he's up to no good or he's on drugs or something," he told the 911 dispatcher. "It's raining and he's just walking around looking about."

After describing Martin as a black male "with something in his hands," Zimmerman shouted, "Shit, he's running!" He then exited his vehicle to pursue Martin.

"Are you following him?" the dispatcher asked. Zimmerman answered: "Yep."

"OK, we don't need you to do that," the dispatcher warned.

Minutes later, according to 911 recordings, neighbors reported a tussle between Martin and Zimmerman on the lawn outside their homes. During one resident's call, the recording captures screaming in the background before two loud gunshots are heard.

"There's someone screaming," one distraught female caller told a 911 dispatcher. "I just heard a gunshot."

"There's a black guy down," a male caller informed another 911 dispatcher. "It looks like he's been shot, and he's dead."

When police arrived on the scene, they found Martin lying in the grass, a fatal bullet wound in his chest. Police, however, did not to arrest Zimmerman for killing the teen-ager, which led to cries of racism and debate over a Florida "self-defense" law that local police say makes prosecuting him difficult.

"What brings me here is the total outrage over this cold-blooded murder," Renee Marshall-Richards told City Paper prior to the rally at CMU, which was organized by the Carnegie Mellon University Black Graduate Student Organization. "The justice system doesn't provide justice for all," added Richards, a 56-year-old black woman from Carnegie. "There's no justice for people of color."

During the rally, which drew protesters both black and white, young and old, speakers frequently raised the issue of race as they spoke about Martin's death.

"The true killer of Trayvon was racism," speaker Brittany Claud told demonstrators, standing on a stage in front of a sign reading, "I am Trayvon."

The cries for justice sounded similar to those heard in Pittsburgh after the high-profile arrest and beating of Homewood teen Jordan Miles more than two years ago. Many protesters at the rally drew direct comparisons between Martin's death and the beating Miles suffered at the hands of three undercover Pittsburgh police officers in January 2010.

Miles was beaten by three members of an anti-gun task force, who claimed they mistook a bottled soft-drink for a gun — no evidence of either was found — and said Miles tried to run from them and resisted arrest. But photos taken afterward of the CAPA High School honors student — his face swollen and his scalp raw — sparked controversy across the city.

When BPEP's Stevens saw photos of Martin, he instantly thought of Miles. Both of the boys "were in an innocent-type situation," said Stevens. "Why is Trayvon Martin dead? Why is Jordan Miles hospitalized because he is black while walking?"

For Homewood parent Jarett Logan, the lessons are difficult, yet necessary, to teach kids growing up in predominately black neighborhoods. After the Miles beating, which happened very close to Logan's home, the father of five said his 12-year-old son asked, "Are the police allowed to beat you like that?"

Martin's death has only prompted more questions, such as, "Why isn't it safe to wear a hoodie?"

Logan said he and his son were recently watching CNN when the news station began a segment about Martin's killing. "[My son] was just really confused," said Logan. "It's really difficult to start a lesson that early [about] how to navigate in America."

One month after killing Martin, Zimmerman is still a free man — the beneficiary of Florida's "Stand Your Ground" law, which allows citizens to use lethal force to fend off an attacker they believe may kill them.

The law, an extension of the well-known "Castle Doctrine," has become a flashpoint for controversy since the Martin shooting. Zimmerman claims he was acting in self-defense, a claim which the law's skeptics — and some of its supporters — decry.

At this writing, 28-year-old Zimmerman has not been charged. But that may change. On March 19, federal authorities announced that they were opening a criminal investigation into Martin's death.

"Arrests need to be made," said Cynthia Newsome, a 51-year-old Aliquippa resident on hand for the protest. "Justice needs to be done."