A decade later, Walsh was featured in Quantum's After Mrs. Rochester, a complex piece blending the life of writer Jean Rhys with Rhys' own interpretation of Jane Eyre. Walsh's part -- a feral manifestation of Rhys' psyche -- couldn't have been further from the buckled-in Elizabeth Hapgood. As "the madwoman," Walsh less walked than prowled, and spoke largely in laughter, growls and sinuous body language. Audiences were captivated: "Robin Walsh is beautifully moving in the role -- violent, volatile, lustful, the id personified," wrote Anna Rosenstein in her Pittsburgh Post-Gazette review.

Actors, of course, are supposed to be chameleons. But Walsh transforms much more convincingly than most. "If you had to name the leading lady of Pittsburgh, I think it has to be her," says Boos. "You can't cast her in anything other than the leading role because you can't take your eyes off her."

Walsh is not only one of Pittsburgh's finest actors; she's also among the busiest. She has a full-time job in academia, heading up the graduate program at Point Park University's Conservatory of Performing Arts. But she's found time to lend her magnetic presence to Quantum and other troupes as well.

In recent years, she's played Stella in A Streetcar Named Desire; a dog (in A.R. Gurney's comedy Sylvia); and, in 2003, both Lady Macbeth and a cross-gendered Hamlet. At City Theatre, in the 2004 world premiere of Adam Rapp's Gompers, Walsh played the darkly comic role of an alcoholic ex-stripper who seduces her daughter's boyfriend.

"Typically for Robin, the role had this [great] emotional depth," says Tracy Brigden, who directed Gompers. "But she has so much skill that she's able to play comedy at the same time."

Off stage, the dark-haired Walsh is warm but unassuming. She grew up in small-town Butler, Pa., and in high school was so shy that classmates nicknamed her "The Deaf Mute." Her mother signed her up for YWCA acting classes anyway, and she's been on stage ever since. Her path led through Point Park, where she studied acting as an undergrad, a couple disillusioning shots at the New York City market, and some time on the West Coast.

Since 1996, Walsh has been back in Pittsburgh, where such former Point Park classmates as Doug Mertz and Sheila McKenna also shine on local stages. Walsh says there's more work in Pittsburgh than before, and that it pays better. Moreover, work rules now let Equity actors such as Walsh perform in some non-Equity productions. "I'm very, very lucky," she says. "I get cast in roles here that I would never get in other cities."

As a result, her face is familiar enough that she gets recognized on the street. "I really like working in Pittsburgh because I really feel like I'm part of this community," she says.

This spring, Walsh was preparing for another big job: the title role in Ibsen's Hedda Gabler. Because director Tadeusz Bradecki wanted the Pittsburgh Irish & Classical Theatre production to be more than the domestic drama it's usually staged as, Walsh's role demanded reading more than just the script. Bradecki compiled a reading list for Walsh, summing up 19th-century intellectual history and the tumultuous zeitgeist faced by Ibsen's tortured, volcanic heroine: Dostoevsky, Faust, Nietzsche. "I love to do research," Walsh says.

Cultured, paradoxical Hedda seems a far cry from, say, Rochester's madwoman. But for Walsh -- a yoga practitioner who cites a flamenco dance as the best live performance she's ever seen -- every role starts inside, and expresses itself through the body first.

"Words are just skin, I always tell my students," she says. Rehearsal, she adds, is about "listening with your whole body. You really feel the energy from other people." 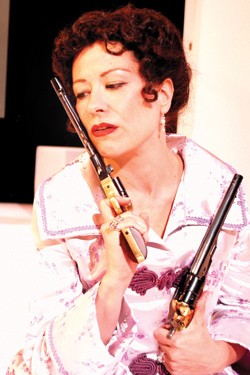 Sarah Marince: Never underestimate the power of a determined woman

Pittsburgh Songs To Warsh Your Hands To