Build your own burger, with toppings galore 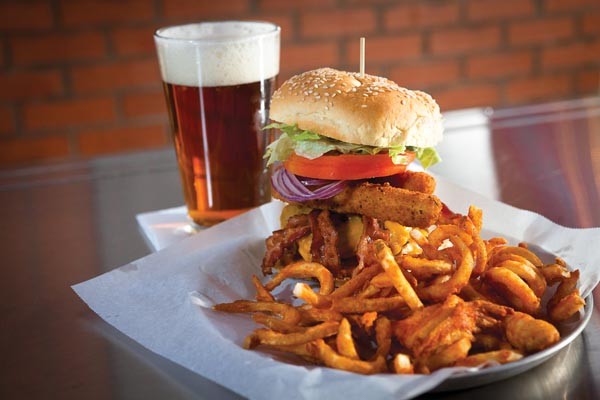 In the beginning, restaurant burgers were thin — and cheap. If you wanted more, you'd order a double-decker deal with an extra patty. Then, a couple decades ago, bars started to distinguish themselves by boasting of their bigger burgers, weighing in at six, eight, even 12 ounces. When burgers went upscale a couple years ago, with fancy cuts of beef custom-ground, patty size came back down, but the sandwiches still tended toward jaw-breaking height. Inevitably, things have come full circle. Stack'd Burgers & Beer derives its name from its practice of offering smaller patties (relatively — at 4 ounces, they actually outweigh the more modest burgers of yore) that can, yes, be stacked for bigger appetites.

Small, simple burgers may not make for the most exciting sell, but Stack'd sets stock by them, resisting the temptation to compensate for diminutive size with gourmet flourishes. While the menu does mention a custom beef blend, it doesn't name cuts. And then there's the synergy between the burger toppings and other bar food: You can have a pierogi on a plate or on a bun, and you can have Thai chili sauce slathered on a wing or a burger. In fact, with the exception of potato skins and bone-in wings, every item Stack'd offers can be had on a burger.

The result can be a bit bewildering, if not downright overwhelming, as you wield your golf pencil over a lengthy BYOS ("Build Your Own Stack") checklist of meats, breads, cheeses, toppings and sauces that reads like the weekly shopping list of a moderately large family.

But it is fun to get inventive. Sriracha honey sauce and tater tots? Blazin' BBQ and Fritos? Peanut butter and grilled pineapple? Why not! While the options are mostly humble, they're extensive enough to venture far beyond the typical array of toppings, and if you like you can go pretty upscale: Angelique combined spinach, pesto aioli and tomatoes to create an Italian-style veggie burger that far outshone the boilerplate pizza burger slathered in standard red sauce and provolone.

The veggie patty was excellent enough to merit further discussion. Because it wisely eschewed any fruitless effort at duplicating beef-burger taste or texture, it avoided the Gaines-burger-esque character of many commercial veggie burgers. Instead, it had a crisp exterior crust and soft yet substantial interior that Jason found reminiscent of a falafel. The burger was comprised of a mash of various grains and legumes, a few finely diced garden vegetables and fresh herbs. The resulting flavor was sophisticated enough to stand on its own but pliant enough to cooperate with whatever you wanted to stack atop it.

The beef burgers were less remarkable. They had good, robustly meaty flavor, but their texture was slightly tough and chewy. We wouldn't rave about them to a burger purist. But as a foundation for an exercise in topping extravagance, they sufficed.

Unfortunately, Jason was a bit let down by the toppings on his burger. He went Mexican-style, with pepper-jack cheese, lettuce (we appreciated being able to choose between romaine and iceberg), tomatoes, guacamole and the Stack'd house sauce, which is chipotle-based. The guacamole was so scant, though, that he had to lift the bun to confirm it was even present. Perhaps this an occupational hazard when you offer 19 free toppings as well as 14 more at a buck apiece. The kitchen doesn't necessarily have a good feel for the best proportions in every unique custom-ordered burger it prepares.

Some items which we didn't fancy on our burgers we tried as appetizers. Fried mac-n-cheese, in the form of bite-size breaded nuggets, was creamy inside and crunchy outside, but the bland, Velveeta-style cheese sauce didn't offer much flavor. Fortunately, a cup of spicy ranch sauce served alongside picked up the slack. Tater tots were as good as, or better than, you remember from your childhood, extremely crispy without but fluffy and distinctly potato-flavored within.

A bowl of chili was prepared in the classic style, with ground beef and beans in a slightly spicy, tomato-based broth, and sprinkled with grated cheddar and crunchy Fritos. This was a chili surely worth having on a burger.

Milkshakes have become de rigueur at the modern burger joint, but those at Stack'd seemed like afterthoughts, poorly blended and without much flavor. It was a reminder that Stack'd is as much a bar as it is a restaurant, with a vast, square bartop dominating the lofty second floor. Of course, burgers and beer are time-honored complements. The only question is, what else will — or won't — be good with your burger?