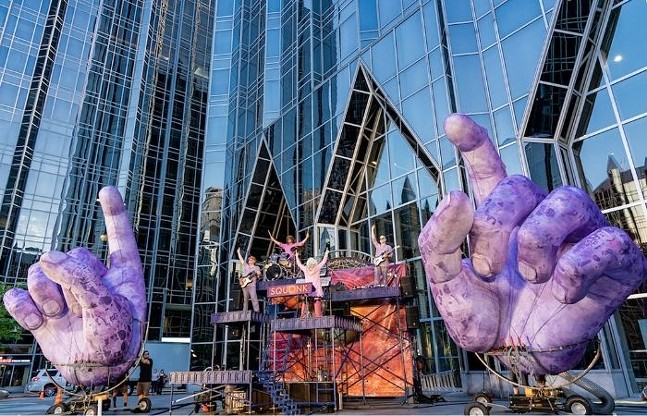 Courtesy of Emily O'Donnell
Hand to Hand by Squonk
A taste of post-industrialism that combines high and low art — and two giant purple hands — is returning to Pittsburgh.

Squonk, a performance group with roots in Pittsburgh, is returning to in-person performances for the first time since October 2019 with Squonk in the Neighborhood, featuring Squonk’s acclaimed Hand to Hand show. After its North Side performance got rained out July 17, the series will debut Sat., July 24 on the South Side as part of the Music on the Mon series, with additional performances in Wilkinsburg and Sharpsburg later in July and in August.

The performance group, which shares a name with a Pennsylvanian cryptid, and consists of anywhere from 10 to 20 artists, specializes in accessible, site-specific, and participatory shows. Started in a local junkyard 30 years ago, Squonk has been committed to producing inventive, genre-defying art using puppetry, machinery, music, and other media. The group has toured the world and received wider recognition, including as a contestant on the television show America's Got Talent.

Hand to Hand is one of three shows Squonk is currently touring. Created in 2019, it was co-commissioned by John F. Kennedy Center for the Performing Arts, Artscape, Pittsburgh Downtown Partnership, Moraine Valley Fine & Performing Arts Center, FirstWorks, and Discovery Green.

The show features two enormous puppet hands, each one about the size of a house and weighing around 600 pounds. Rigged like a sailing ship, the hands move with original progressive rock informed by a variety of music, including rock, pop, jazz, Celtic, classical, and film soundtracks. The thumbs detach and engage in a guitar battle, and audience members are invited up to grab the hand rigging and become part of the dance.

In 2019, Squonk made the best of a bad situation by staging Hand to Hand for free in PPG Plaza after its gig with the Three Rivers Regatta was canceled, along with the rest of the event.

The Squonk in the Neighborhood series is funded through the National Endowment for the Arts — the ninth NEA award Squonk has received — and the initial plan also included a performance in Braddock.

Rae Holliday of Open Door Strategies, a communications firm that represents Squonk, says the performance group is planning about a dozen events in and around Pittsburgh for later in 2021 and in 2022, including, hopefully, a return to the North Side to make up for the rained-out debut.

Those who want to experience Squonk’s two giant hands firsthand can also catch the show at Penn Avenue and Center Street in Wilkinsburg on Sun., July 25, or at Kennedy Park in Sharpsburg on Sat., Aug. 7.