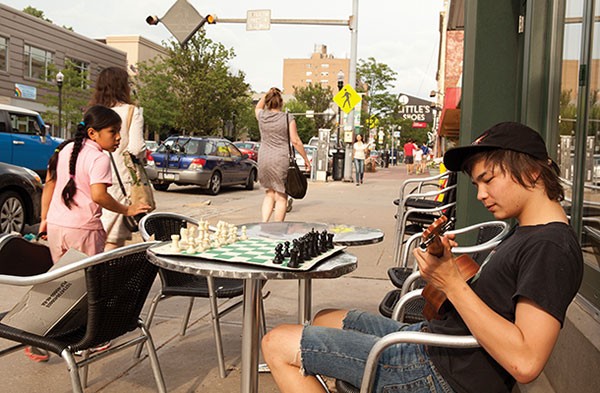 One Day in Town

An uphill climb from virtually all of its surrounding neighborhoods, Squirrel Hill has a little bit of everything: bars, parks, ethnic food, students, a charming business district, old mansions, and is the center of the city's Jewish community.

Start your tour in the heart of the business district at the intersection of Forbes and Murray avenues. Pop inside the recently renovated Carnegie Library (5801 Forbes Ave., 412-422-9650) whose massive street-facing, second-floor glass windows offer a bird's-eye view of nearby shops, bookstores, bakeries and restaurants. Take a perch on the ledge by the windows with a book or magazine, or stake out a chair and watch the street traffic pass by.

For a taste of the neighborhood's Jewish heritage, walk across the street to the Jewish Community Center (5738 Forbes Ave., 412-521-8010) — you won't miss the clock with Hebrew letters that faces Forbes Avenue. Inside you'll find the American Jewish Museum, which features rotating exhibitions. Recent exhibits have included everything from "BubbeWisdom" featured in quilt-making to six-word memoirs that capture Jewish life in Pittsburgh.

A short walk away is the Homewood Cemetery (1599 S. Dallas Ave.), where ornate wrought-iron gates line the perimeter. Not only is the cemetery the final resting ground for some of the region's famed industrialists (the Heinz, Mellon and Frick families are all represented here), but it has some of the city's most interesting architecture in miniature. Find the English Tudor-Gothic stone chapel and you'll admire everything from its ornamental plaster ceiling to its thick oak doors.

No tour of the neighborhood is complete without visiting one of its many Asian restaurants. A favorite is Everyday Noodles (5875 Forbes Ave., 412-421-6668). The noodles are made in house (watch the cooks pound them out through the glass kitchen window), but the real gems here are the soup dumplings. These thin dumplings filled with meat in a splash of broth are deceptively simple, but you'll be craving them for months.

61C Café. Named for the bus line on which it sits, this coffee shop is a Squirrel Hill institution. Stop in for a pre-movie coffee (the Manor Theater is right down the street), or a house-made pastry. 1839 Murray Ave., 412-521-6161

Chengdhu Gourmet. One of the most extensive and unusual Chinese menus in town, specializing in Sichuan cuisine. 5840 Forward Ave., 412-521-2088

Gluuteny. If you have food sensitivities, be sure to check out this bakery, which specializes in gluten-free and dairy-free indulgences like cupcakes and cookies. 1923 Murray Ave., 412-521-4890

Ramen Bar. The solution to life's woes may be found in a steaming-hot, freshly prepared bowl of Japanese ramen, topped with meat, vegetables and specialty ingredients. 5860 Forbes Ave., 412-521-5138

Independent Brewing Company. A beautiful, cozy spot where conversation abounds and all of the beer on tap is regional. 704 Shady Ave., 412-422-5040

Squirrel Hill Café. Known to locals as "the Cage" and a legend among a certain set, this smoky bar feels like home. Go here for beer, greasy bar fare, jukebox tunes and close conversations in booths with consorts. 5802 Forbes Ave., 412-521-3327

Christine Frechard Gallery. The gallery (which also offers language classes!) draws on a range of artists, from local to international. 5871 Forbes Ave., 412-421-8888

Mexico Lindo. Boutique and gallery specializing in Mexican folk art and crafts is known for its annual Day of the Dead display. 2027 Murray Ave., 412-422-9984

Littles Shoes. This Forbes Avenue landmark has been around for decades and helped generations of Pittsburghers find the right fit. 5850 Forbes Ave., 412-521-3530