CP Photo: Pam Smith
Larissa Russo, owner of The Refillery
A woman-owned business in Squirrel Hill has taken on one of the world’s biggest challenges in an effort to make the city more environmentally friendly: single-use plastics.

Pittsburgh-born and raised Larissa Russo started The Refillery to try and reduce consumers’ use of nonrecyclable plastics used in packaging for household items like dish soap and makeup.

The concept is simple: Customers bring in their own empty glass or plastic containers, and The Refillery supplies them with personal care and home essential products, which are sold by weight. (The containers are weighed prior to filling.) Russo, who has a bachelor’s degree in physics and a master’s degree in engineering from Duquesne University, says that after working in a corporate environment for six years, she started thinking about how she could have a greater impact.

She says it was the pandemic that motivated her to shift her focus to the environment.

“I'm definitely in that great resignation group, the group of people that saw the pandemic as an opportunity to slow down,” says Russo. “It caused me to really think about my consumption habits. In the early stages of the pandemic, I'm ordering things from Amazon and I just thought, ‘What am I doing?’”

CP Photo: Pam Smith
Inside The Refillery in Squirrel Hill
In early 2020, Russo says she was inspired by videos she saw on TikTok about similar stores in other cities. After resigning from her job in April 2021, she launched The Refillery and had her first pop-up event at The Neighborhood Flea in the Strip District two months later. Her store now has a permanent storefront on Murray Avenue, providing a wide variety of refillable items like hand soap, dishwasher powder, shampoo, body wash, and lip balm, as well as refillable jars and dispensers.

A 2017 study by Science Advantages found that 91% of all plastics aren’t recycled at all, but Russo says the fault isn’t solely on consumers. Small items like straws can often fall out of the crevices in recycling machinery, and there are also items that just aren’t accepted by recycling centers, including single-use plastics. More than 300 million tons of plastic are produced worldwide each year, according to The Natural Resources Defense Council, and half of that comes from single-use items. Reducing plastic use can help limit pollution, including plastic waste ending up in waterways.

But Russo says it’s important to move away from the model that blames consumers for their “reliance” on plastics.

“I believe that major corporations don’t have an interest in selling a great product, right?” says Russo. “Their interest is in selling a quick product, an easily accessible product, you know, it’s all about convenience.”

Russo says her goal with The Refillery is to make refilling accessible, budget-friendly, and convenient. 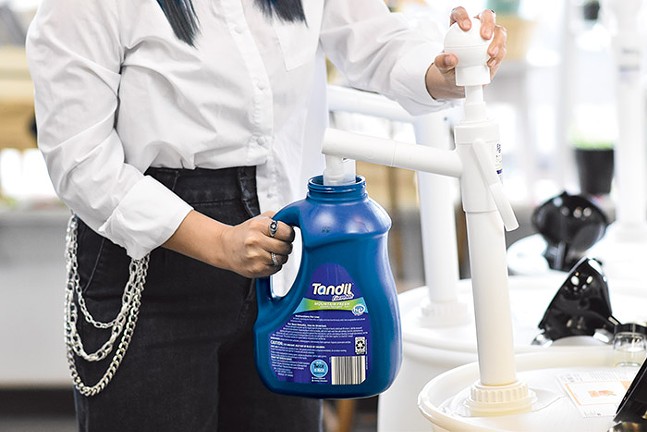 CP Photo: Pam Smith
The Refillery owner Larissa Russo refills a laundry detergent bottle.
The Refillery sources all of its products through Russo’s company The Local Instead, which highlights local and small businesses who offer similar items to big box stores. It provides items that are ethically sourced and produced, including a large number of products made in Pennsylvania, which are marked with “PA Local.”

For those who are looking to limit their use of single-use plastics and make the switch to using refillable containers, Russo says to start by taking stock of what you have and using all of it.

“I always tell people, ‘Go slowly,’ when you're changing over and creating new habits,” she says. “So maybe you do start with dish soap. Then, maybe in a few months, when that new habit is formed, you switch over to the liquid laundry refill. It's just about breaking those habits, going slowly, and being mindful about something that is convenient that, unfortunately, is going to last forever.”
The Refillery. 1931 Murray Ave., Squirrel Hill. therefillerypgh.com