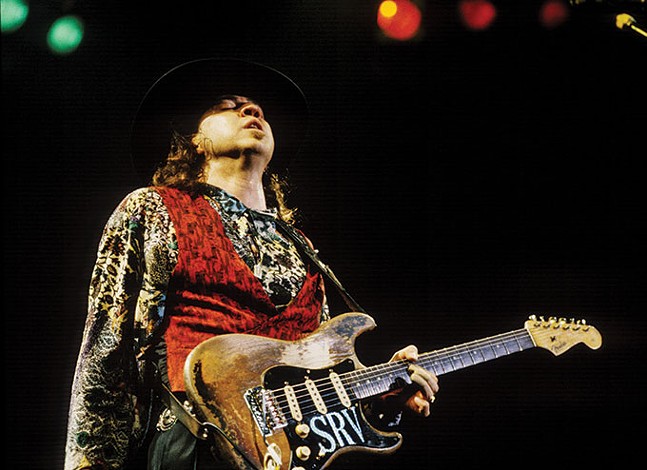 Photo: Jay Blakesberg
Stevie Ray Vaughan during the final show of the Fire Meets the Fury tour with Jeff Beck

Stevie Ray Vaughan was barely a teenager when he started playing for adults in roadhouses and clubs in his native Texas. Blues guitarist Albert King, notoriously particular about sharing stages with or praising musicians, recognized Vaughan as a sublime talent. Other musicians, including Jackson Browne, Dr. John, and Billy Gibbons of ZZ Top, were gobsmacked by his playing.

But Vaughan struggled for years, his career nearly derailed by drug abuse, before he was finally recognized as one of the world's best guitarists.

“John Hammond [the legendary Columbia Records record producer] said sometimes it’s the most obvious ones who take the longest,” says Alan Paul, co-author of Texas Flood: The Inside Story of Stevie Ray Vaughan (St. Martin’s). “It’s as good an explanation as any, which is to say ultimately there is no explanation. ... But once people did see him, it did seem to be completely obvious to them.”

With co-author Andy Aledort, Paul — a Squirrel Hill native and graduate of Allderdice High School — interviewed Vaughan’s former bandmates and fellow musicians, friends, and family members, over three decades. The brother of Jimmie Vaughan, founder of the Fabulous Thunderbirds, Stevie Ray moved to Austin, Texas, at the age of 17 in 1971 after dropping out of high school. He was immediately embraced as a wunderkind, but also cut a strange figure around Austin. Vaughan rarely had a permanent mail address, lived out of boxes, and slept on couches; for a while, his main method of transportation was a moped.

Paul thinks this period, while not conducive to advancing his career, was necessary. “As long as it took Stevie to be discovered, he needed that much time, probably, until he was himself,” Paul says.

“His talent was always there, that was obvious,” Paul says. “But I’m not sure that his originality was fully locked in place. And then the experience and the process of every single thing he went through, all together, added up to this incredible thing. That sounds sort of mystical, but it took all these ridiculous, extensive, convoluted things, that path, to get where he had to be.”

In 1986, recognizing he needed help, Vaughan sought treatment for his addiction to drugs. Fortunately, he thrived in rehab. After getting clean, Vaughan never wavered from sobriety, attending 12-step meetings and reading self-help books and pamphlets while on tour, always signing autographs and greeting fans after concerts.

And then, after playing with Eric Clapton at the Alpine Valley Resort in Wisconsin, Vaughan’s life ended when the helicopter he was riding in crashed during foggy conditions in the first hour of August 27, 1990.

“If he had died three or four years earlier because he OD’d, it would have been tragic,” Paul says. “The fact that he came through that and in the end was living the life he was supposed to and playing the way he was ... I think it makes it an extra level of head-scratching, befuddling tragedy. There’s no other way to put it.”